In 2016, 3.8 billion people traveled by air, and IATA expects that number to double over the course of 20 years. This isn't unreasonable, considering that the 4 billion passengers expected to fly commercially this year is double what it was just 12 years ago. Suffice it to say, commercial air travel is common these days. And with some exceptions (like issues with TSA or airport security), it's relatively easy peasy. No wonder it just keeps growing.

But there was a time when commercial air travel was still new. Before flying, the world seemed incredibly--impossibly--vast and getting from point A to point B could have taken weeks, months, or years instead of mere hours.

The Dawn of Commercial Flight

While manned, heavier-than-air flight has been around since the early 1900s (historically, the Wright brothers are credited with inventing the airplane in 1903), it didn't really take off as a common endeavor for two decades. Post-WWI, the aviation industry really started to grow and many commercial airlines began operating--some of which are still connected to today's major carriers. The Contract Air Mail Act of 1925 (also known as the Kelly Act) directly contributed to the growth of airlines and the Air Commerce Act of 1926 gave the government the responsibility for promoting air commerce, establishing airways, certifying aircraft, licensing pilots, and issuing and enforcing regulations.

However, that's not to say that no one saw the opportunity to commercialize air travel before then. 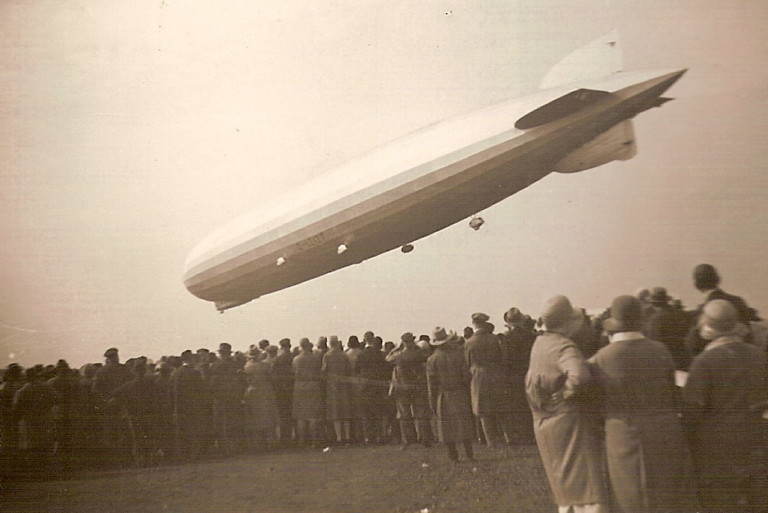 “People watching the landing of Zeppelin LZ 127” by Grombo is licensed under CC BY-SA 3.0

Before the success of heavier-than-air aircraft (airplanes), there were lighter-than-air aircraft. Unlike most early flying machines, airships (also known as dirigible balloons) were successful and were further utilized for military and commercial needs. It was actually with a rigid airship that the world's first airline in revenue service operated.

Founded November 16, 1909, DELAG (Deutsche Luftschiffahrts-Aktiengesellschaft) operated Zeppelin rigid airships to carry passengers for pleasure cruises. During WWI, the Zeppelin airships were needed for war, but after it was over, two of DELAG's ships helped reconnect the cities of Europe.

The first scheduled passenger airline service began in the U.S. on Jan 1, 1914. The St. Petersburg-Tampa Airboat Line only lasted 4 months, but in that time it opened the doors for later transcontinental flight. Percival Elliott Fansler started the airline using a Thomas Benoist-designed "flying boat." Pilots Tony and Roger Jannus made 2 flights a day, 6 days a week in 2 aircraft until they left Florida. They carried more than 1,200 people during those 4 months.

During WWII, casual air travel virtually stopped, and flying was pretty much limited only to those serving the war effort. After the war, though, the aviation industry experienced substantial growth--even more than it had in the interwar years.

Commercial aviation, in particular, grew rapidly and (initially) primarily utilized ex-military aircraft to transport both people and cargo. Heavy and super-heavy bombers like the B-29 and Avro Lancaster were easily converted into commercial aircraft, and the DC-3 was ideal for longer commercial flights. The British de Havilland Comet was the first commercial jetliner to fly, although it had some major issues.

A number of changes occurred in the air travel industry that distinguishes the Prewar and Postwar periods (Postwar referring to WWII). Changes in technology, industry structure, and the market were all factors in what is a central distinction: international travel.

Since the United States entered the war later than European countries, they were able to spend the time and resources for large-scale commercial craft development and production. U.S. aircraft technology (since 1945) essentially set the standard for international air operations that developed at this time and continued on. Foreign carriers outside the U.S. still had to, for the most part, purchase and operate American aircraft.

Dominant European carriers included Deutsche Lufthansa, Air France, KLM, Sabena, and Imperial Airways (the predecessor to BOAC), although these weren't the only players. Unlike the U.S., the structure of the European aviation industry saw an increase in dozens of smaller carriers, thanks to the emergence of international travel. Some carriers formed from former Colonial areas such as the Philippines, Indonesia, Pakistan, and Morocco. Others represented independent nations which had not, up until this point, participated in the air age, like Thailand, Saudi Arabia, Yugoslavia, and Iceland. Other carriers from the U.S. besides Pan Am also gained a strong foothold in international travel.

Charter service developed during the 1950s and 1960s and quickly became a major component of the aviation industry. To charter is to rent out the entire aircraft. It became a particularly popular method across the North Atlantic, within Europe, and also between Europe and Africa. Air Charter services also influenced the pricing behavior of scheduled carriers.

When commercial air travel was still young and fresh, flying was a novelty experience characterized by luxury. The Interwar years are often referred to as the Golden Age of Aviation, marking the progressive shift from wood-and-fabric biplanes to streamlined metal monoplanes. Meals were fine dining experiences, leg room was plenty and the services were upscale. But as the industry moved away from exclusivity to a more mass market platform, the planes and experiences themselves changed. Technological expansion changed everything.

By the mid-1960s, about 100 million passengers had traveled via jet.

Post-war aircraft eventually became larger, faster, and could fly for greater distances. And after several decades, aircraft advances and the growth of the aviation industry brought us very much where we are today. Flying isn't so exclusive anymore--air travel has been brought to the masses. Which is a great thing, really. Consider those earlier numbers again; a lot of people take advantage of flying these days. If you long for that nostalgia of the Golden Age of Flying, you can spring for a first class ticket. The modern first class experience is similar to those vintage exclusive flights--at a price that is probably similar, too.