In the years immediately following WWII, the aviation industry experienced massive growth. In the United States alone, the end of the war turned the country into the world's largest industrial manufacturer. And as aviation developed at a rapid pace, the need for bigger, better, and more modern commercial aircraft emerged. The result was tremendous advances in aeronautics.

Early four-engine transports, developed for use during WWII, became available for airline use. Eventually, aircraft were developed specifically for commercial use. The British were the first to build a commercial jet and remained ahead of the U.S. for quite some time when it came to passenger jet development. That aircraft was the de Havilland Comet.

In 1943, the Brabazon Committee (formed by the Cabinet of the United Kingdom), called for a pressurized, transatlantic mail plane that could carry non-stop one ton of payload at cruising speed of 400 mph. At the time, the twin-engine Douglas DC-3 was carrying almost all of the world's airline passengers. America ruled the skies, and they wanted a piece of the action--especially knowing that the larger and faster Douglas DC-4 and Lockheed Constellation 649 would be commercialized when the war was over.

Sir Geoffrey de Havilland, a committee member and head of the de Havilland company, used his influence and his company's expertise to push for the development of a jet-propelled aircraft. He further proposed a specification for a pure turbojet-powered design. The committee accepted and awarded de Havilland with a development and production contract in February 1945. Due to the advancements of de Havilland's type and design, they had to design and develop both the airframe and the engines.

The DH 106 Comet (officially named in December 1947) represented a new category of passenger aircraft, and therefore more rigorous testing was a high priority. de Havilland conducted extensive R&D from 1947 to 1948. The first de Havilland Comet prototype was completed in 1949. Initially, it was used for ground tests and brief early flights. The maiden flight occurred July 27, 1949, and lasted about a half hour. This prototype was displayed at the 1949 Farnborough Airshow before flight trials began. A second prototype made its maiden flight a year later. 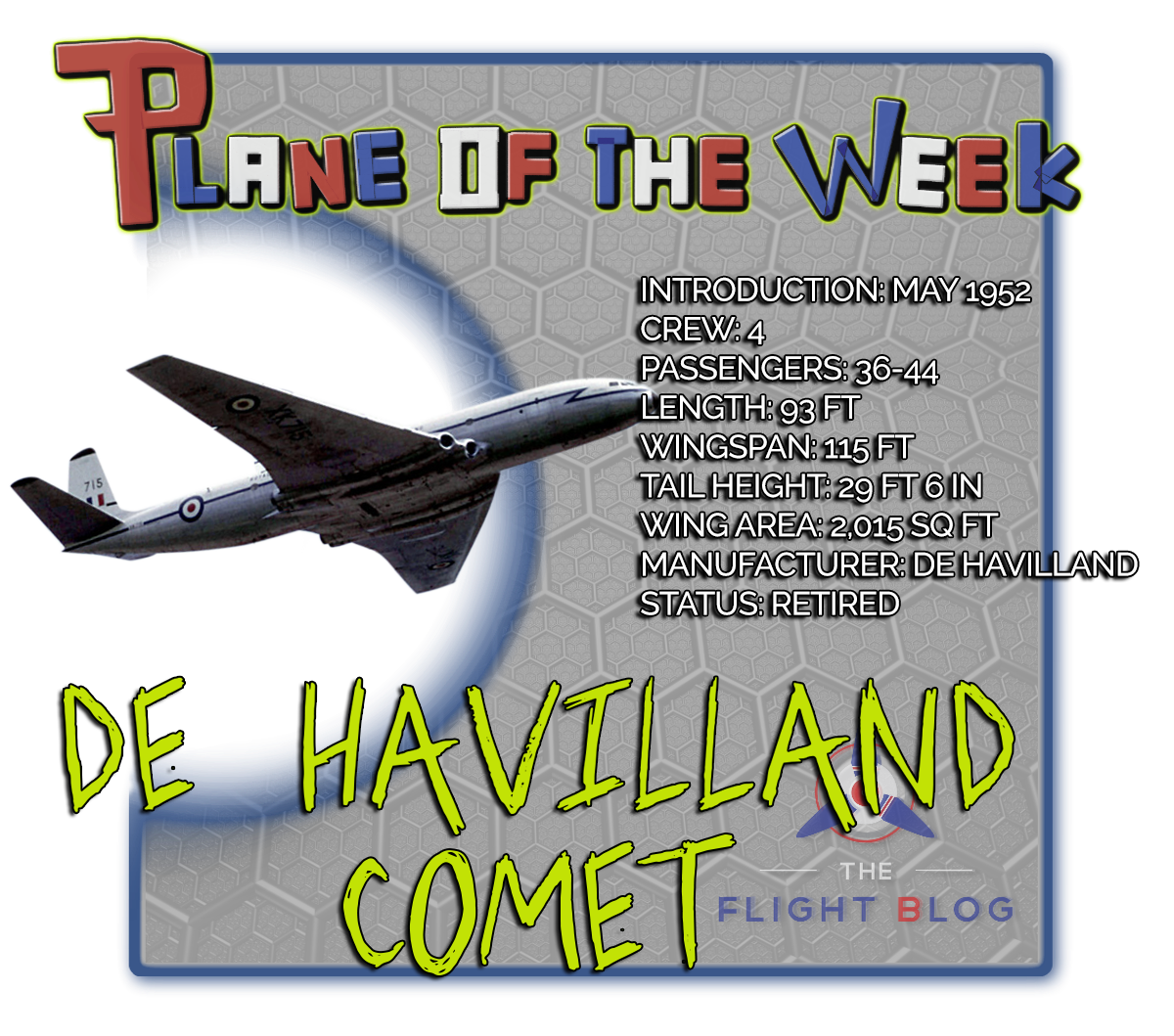 The de Havilland Comet was an all-metal, low-wing cantilever monoplane powered by 4 engines. The cockpit had room for four: 2 pilots, a flight engineer, and a navigator. The design was rather unusual for its time. Such uncommon elements included a swept-wing leading edge, integral wing fuel tanks, and four-wheel bogie main undercarriage units specially designed by de Havilland. Two pairs of turbojet engines were buried under the wings.

The first Comet carried fewer passengers and was more spacious than later models. Large picture windows and table seating accommodations for a row of passengers added extra luxury and comfort that wasn't typical. The biggest highlight, though, was the quiet, "vibration-free flying" offered by the turbojet engines (versus propeller-driven airliners).

The first production aircraft flew January 9, 1951. On January 22, 1952, the fifth production received the first Certificate of Airworthiness to a Comet. The first Comet flight with fare-paying passengers occurred n May 2, 1952, from London to Johannesburg.

The Comet was incredibly popular with passengers, including Queen Elizabeth, the Queen Mother and her daughter Princess Margaret. They were the first members of the British Royal family to fly by jet.

In its first year of operation, the de Havilland Comet flew nearly 105 million miles, carrying 28,000 passengers. After that first year, however, things started to fall apart (literally). In 1954, two Comet disasters occurred when the aircraft disintegrated in flight due to metal fatigue. On January 10, 1954, British Overseas Airways Corporation Flight 781 departed Rome, Italy, for London, England. During the final part of its journey from Singapore, the plane suffered an explosive decompression at altitude and crashed into the Mediterranean Sea, killing everyone on board. On April 8, 1954, South African Airways Flight 201 departed Rome, Italy for Cairo, Egypt, on the second stage of its flight from London to Johannesburg, South Africa. The 7 crew members and 14 passengers all died. After an extensive investigation, it was determined that, like Flight 781, manufacturer design defects and metal fatigue caused explosive decompression.

All remaining Comets were withdrawn from service and de Havilland modified their planes to fix the problem. The Comet 1 never flew again, nor did Comets 2 and 3. By the time Comet 4 went into production, it couldn't compete with the American jets that entered service.

Despite its tragedy, the de Havilland Comet changed the course of aviation forever.


Looking to keep your aircraft airworthy?
Check out our premium selection of aviation lubricants at aviationoiloutlet.com