Humans have always been rather obsessed with the notion of flight, well before the development of modern airplanes. In fact, many early civilizations bore myths and legends of mankind and gods alike taking flight. Perhaps the most well-known and referenced myth regarding man and flight is the Greek story of Daedalus and Icarus: Daedalus, an inventor, fashioned a flying contraption constructed of feathers fastened with beeswax. Daedalus's son, Icarus, donned the wings; his father warned him to fly at middle-altitude so that the ocean spray would not dampen and weigh down his wings, nor the sun melt the wax which held his feathers together. The wings worked and Icarus, in his excitement, flew too close to the sun; the wax melted and Icarus fell into the ocean and drowned. This story is often used to analogize the downfalls of hubris.

The Greeks were not alone in their myths of flight--ancient Egyptian, Minoan, and Mesopotamian gods were often depicted with magnificent wings, while Greek gods, Roman gods, and biblical angels all flew sans wings (wings on angels became standard into the Middle Ages).

Eventually the notion of human flight would extend beyond mere myth and legend and would actively seep into mankind's consciousness. Below we highlight 5 inventors and their examples of early flying machines. While some never left the page, a few actually took to the sky:

More than 700 years before Kevin Bacon wowed the world with his loose feet, Roger Bacon was wowing his (few) followers as an important player in ridding humankind's ignorance circa the Dark Ages. 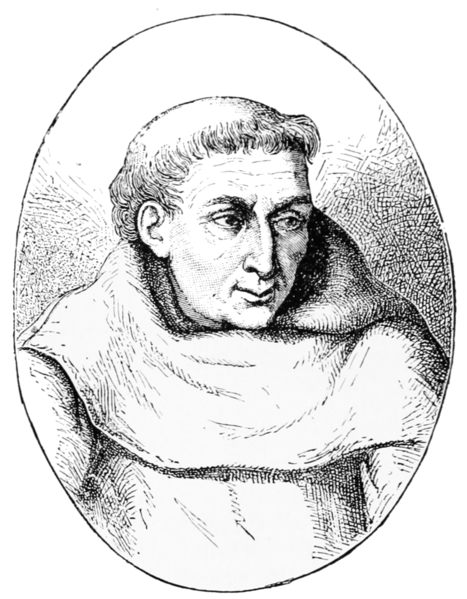 A Franciscan monk who lived between 1214 and 1292, Bacon was a prolific writer and devotee to the power of reason. Though he lacked support during his lifetime, Bacon certainly did not lack gumption: in 1260 he wrote a work on the "superiority of reason" called De Mirabili Potestate Artis et Naturae (On the Marvellous Powers of Art and Nature). In his text, Bacon suggests that human reason is so powerful, it could accomplish even the seemingly impossible, such as build a machine that could enable a person to fly (Can you believe it?!)

While other individuals attempted flight centuries before Bacon's name (such as the tower-jumpers who tried to fly with feathers and wing-like contraptions), Bacon's 13th century texts (though not published for 300 years) indicate that he was the first individual to write about the possibility of flight in a serious and scientific way. It's all about that science.

For a man with such a propensity for genius, and dedication to studying flight, the late Italian painter/scientist had absolutely no impact on the development of flight, mainly because his notes were not published (or even known about) until the late 1800s... clearly a result of his secrecy (he wrote his notes out in mirror writing, for example...impossible for the mirror-less to decipher: a real da Vinci code).

Born in 1452, Leonardo spent a fair amount of his life fascinated by the notion of flight: in 1485 he began studying bird flight, and he would ultimately end up with 500 sketches and 35,000 words regarding flying. A good chunk of his work involved studying birds and bat-like wing sections. Leonardo grasped that humans were too heavy, and not strong enough, to fly using wings attached to arms; though he realized that human physiology was not capable of flight, he designed many ornithopters that required arm and feet peddling. One such sketched ornithopter (an aircraft that flies by flapping its wings) involved the aviator lying down on a plank and working two large, membranous wings using hand levers, foot pedals, and a system of pulleys. 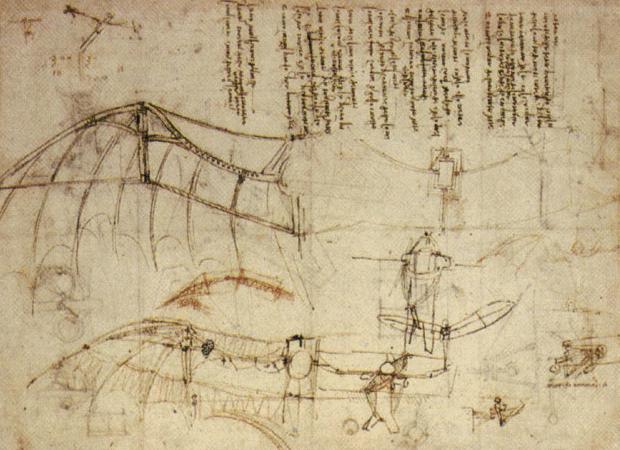 Many of Leonardo's conclusions about how birds fly were incorrect, which made many of his aircraft designs useless (even if they would have been discovered sooner). Besides ornithopters, Leonardo conceived other ides for aircraft, including rotorcraft and controlled gliding flight machines. 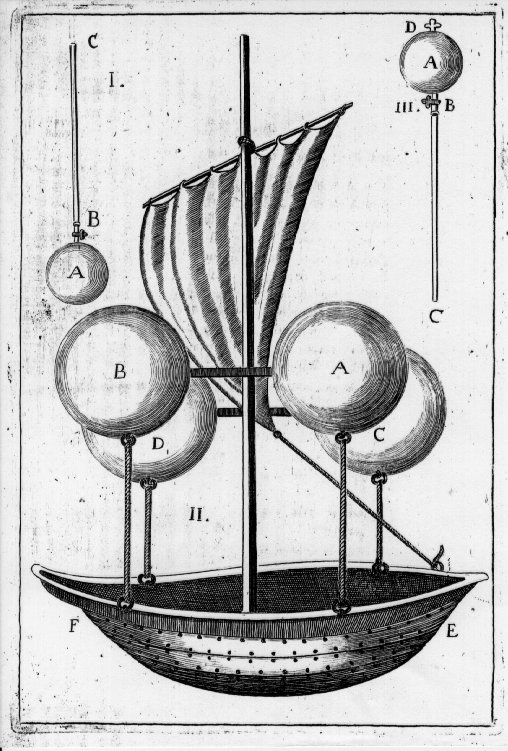 Francesco Lana de Terzi (1631-1687) was an Italian Jesuit priest, mathematician, naturalist, and aeronautics pioneer. He was the first to sketch out the concept for a hypothetical vacuum airship, and has been referred to as the "Father of Aeronautics" for turning aeronautics into a science by establishing "a theory of aerial navigation verified by mathematical accuracy." (Oh, and because there's no such thing as an overachiever in history, he also just so happened to develop the initial idea that eventually developed into braille. You go, Lana.)

In 1670, Lana published a book titled Prodromo, which included a chapter with a description of a "flying ship." He proposed the first scientifically-credible lifting medium for lighter-than-air craft--its design had a central mast with an attached sail, as well as four other masts with thin copper foil spheres attached to them. In his proposition, the air would be pumped out of the spheres, creating a vaccuum inside; being lighter than the surrounding air, the spheres would (theoretically) provide lift.

At this time, it was impossible to manufacture such thin copper as his design necessitated, and the pressure of the surrounding air would have collapsed the spheres. Gottfried William Leibniz proved in 1710 that these vaccuum spheres were physically impossible, so such a vessel was never built. Despite the impracticality of Lana's sphere designs, his proposed methods of controlling height are still in use today (utilizing more predictable lifting gasses).

Sir George Cayley, 6th Baronet (1773-1857) was an English engineer and is considered one of the most important people in the history of aeronautics (hardly surprising, given his appearance on this list of other prolific aviation pioneers). He is even regarded as the first true scientific aerial investigator and the first person to understand the underlying principles and forces of flight.

In 1846, Sir Cayley was first called the "father of the aeroplane," because of his design for the first heavier-than-air craft (as opposed to the lighter-than-air craft of his aeronautical predecessors).

Like Leonardo da Vinci, Sir Cayley studied the physics of bird flight and developed ideas and theories of bird flight from a very young age (although it's probably a safe bet to say his were a bit more accurate than Leonardo's assumptions from over 300 years before). Evidence suggests that he could have modeled the principles of a lift-generating inclined plane as early as 1792 (at the age of 19!). 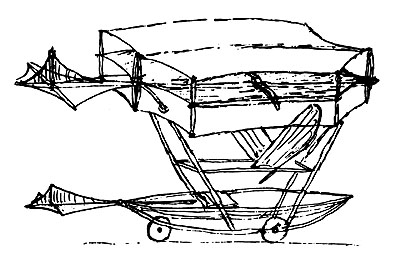 In 1852, Caylye published his design for a full-size manned glider ("governable parachute") to be launched from a balloon, and then to build a version capable of launching from atop a hill, which ultimately carried the first adult aviator across Brompton Dale in 1853. This was the first time anyone flew in a glider with distinct wings, fuselage and tail, featuring inherent stability and pilot-operated controls. This was the first fully modern and functional heavier-than-air craft and, despite the significance of both event and aviator, the identity of the aviator in question remains, to this day, unknown.


Baptiste Jules Henri Jacques Giffard (1825-1882) was a French engineer known for inventing the steam injector and the powered airship. The Giffard dirigible (a steerable airship powered with a steam engine) was the world's first passenger-carrying airship. The aircraft was filled with hydrogen and equipped with a 3 hp steam engine that drove a propeller.

On September 24, 1852, Giffard made the first powered and controlled flight travelling the 27km (~17 miles) from Paris, France to Élancourt. The wind was too strong to allow him to return to Paris. Despite his inability to make it back to the start, he was able to make turns and circles, proving for the first time that a powered airship could be steered and controlled. 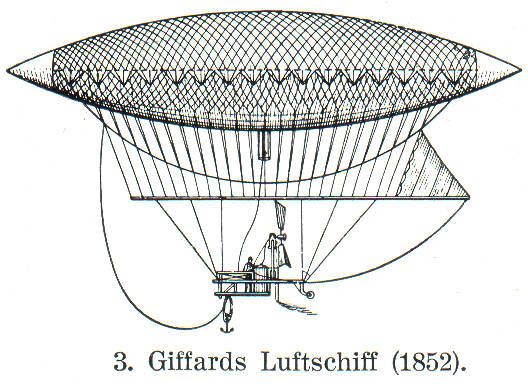 While brothers Orville and Wilbur Wright are generally credited as inventing, building, and flying the first successful airplane, they were certainly not the first ones to build and fly [experimental] aircraft. Mankind has been obsessed with flight (and birds, specifically), it would seem, since the very beginning, and people have been looking for ways to emulate our fine feathered friends by taking to the sky, a yearning which is particularly clear when looking at early flying machines.

Maybe we should wonder for a second: why?