Air shows have a rich history. Since man first learned to fly, airplanes--and aerial stunts--have wowed crowds of people on the ground. For many people in the early 20th century, flying was unreal. It didn't seem possible and seeing was believing.

If you don't believe something is possible, witnessing it en masse is something truly spectacular.

A Brief History of Air Shows


The first aviation meet occurred near Reims in France during August 1909, just one month after Frenchman Louis Bleriot made the first flight across the English Channel.

The Grande Semaine d'Aviation de la Champagne was the first international public flying event. This marked the coming of age of heavier-than-air aviation. The week-long spectacle drew crowds from all over the world, including prominent aviators and the President of the French Republic, Armand Fallières. The Grand Semaine d'Aviation drew 500,000 visitors. Aviators took part in a variety of competitions, such as completing a course the fastest, carrying passengers, and staying airborne the longest.  The Gordon Bennett Cup Race, a speed contest between national teams, was the most prestigious event of the meeting.

The Paris Air Show began in 1908 when a section of the Paris Motor Show was dedicated to aircraft. The following year, there was a show dedicated exclusively to aircraft, held at the Grand Palais from September 25 to October 17. Around 100,000 visitors attended to see products and innovations from nearly 400 exhibitors.

Today, the Paris Air Show is a large commercial event held to demonstrate military and civilian aircraft to potential customers. All major international manufacturers and representatives of the military forces attend the event. Since 1949, the air show occurs every odd year at Paris-Le Bourget Airport in north Paris, France.

The ILA Berlin Air Show was first held in Frankfurt am Main in 1909. In April 1910, several flying clubs combined to form the German Pilots' Association. The Association of German Aircraft Makers was also founded in Frankfurt/Main shortly after. Close ties between the ILA and the Federal Association of the Aerospace Industry (BDLI) still exist.

Today, ILA combines a major trade exhibition for the aerospace and defense industries with a public air show. The event now occurs every even year at the Berlin ExpoCenter Airport near Schönefeld, Brandenburg.

The first major international air show held in the US also took place in 1910. The Los Angeles International Air Meet (January 10 to January 20, 1910) was held in Los Angeles County, California, at Dominguez Field in present-day Carson, California. The Los Angeles Times called it, "One of the greatest public events in the history of the West." In attendance were plenty of individuals who would go on to make big names for themselves, including Eugene Ely, William Boeing, Glenn Martin, Donald Douglas, and Lawrence Bell.

Bigger (and Better than Ever)

The success of air meets took off and spread across the country--and around the world. In many instances, these meets marked the first time a plane had ever flown in the state.

Initially, the only rules for flying were those of nature and physics. This meant pilots got creative. They flew through barns (called barnstorming), they flew in formation, intentionally crashed (for the sake of film), and even climbed from one airplane to another mid-flight (this developed into wing-walking). Single pilot acts were called flying circuses.

After WWI, pilots didn't have much to do flying-wise, but they wanted to keep their skills sharp and their planes in working order (and in the air). Performing for crowds and putting on aerial demonstrations was good for both pilot and spectator.

Air racing remained popular and drew thousands of spectators. Pilots with a need for speed and endurance made headlines. The people saw pilots such as Jimmy Doolittle, Amelia Earhart, and Roscoe Turner as heroes of the Great Depression era. 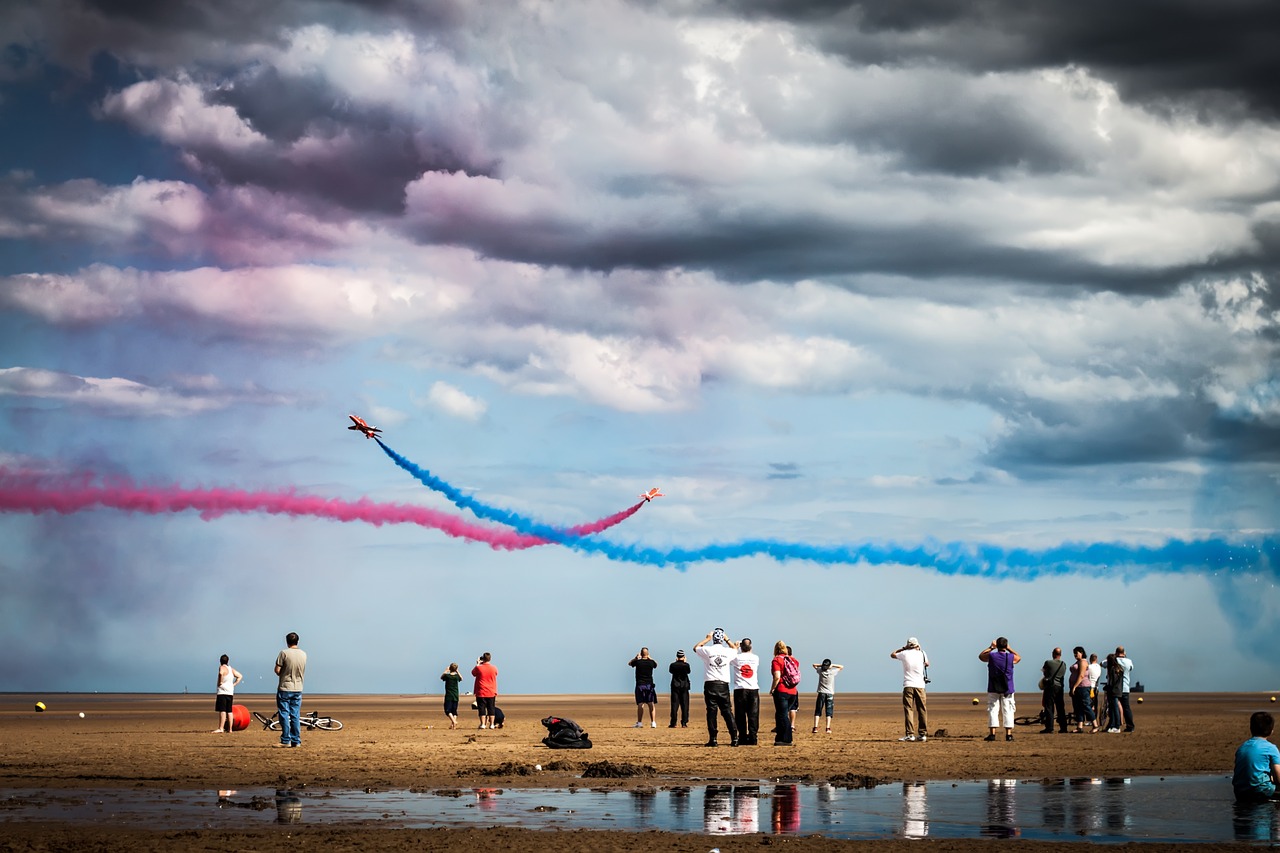 Air shows have certainly grown in both size and numbers over the years. Aircraft, as well as rules and regulations, have all advanced. At these public events, aviators continue to display their flying skills and capabilities to crowds of dazzled spectators. Shows that don't feature aerobatics, but rather simply display aircraft parked on the ground, are static air shows.

Some air shows, like the Paris Air Show, ILA, and Farnborough Air Show feature a business venture or trade show component where the aircraft, avionics, and services are promoted to potential customers. They often end with a day or two open to the public for aerial acrobatic displays. 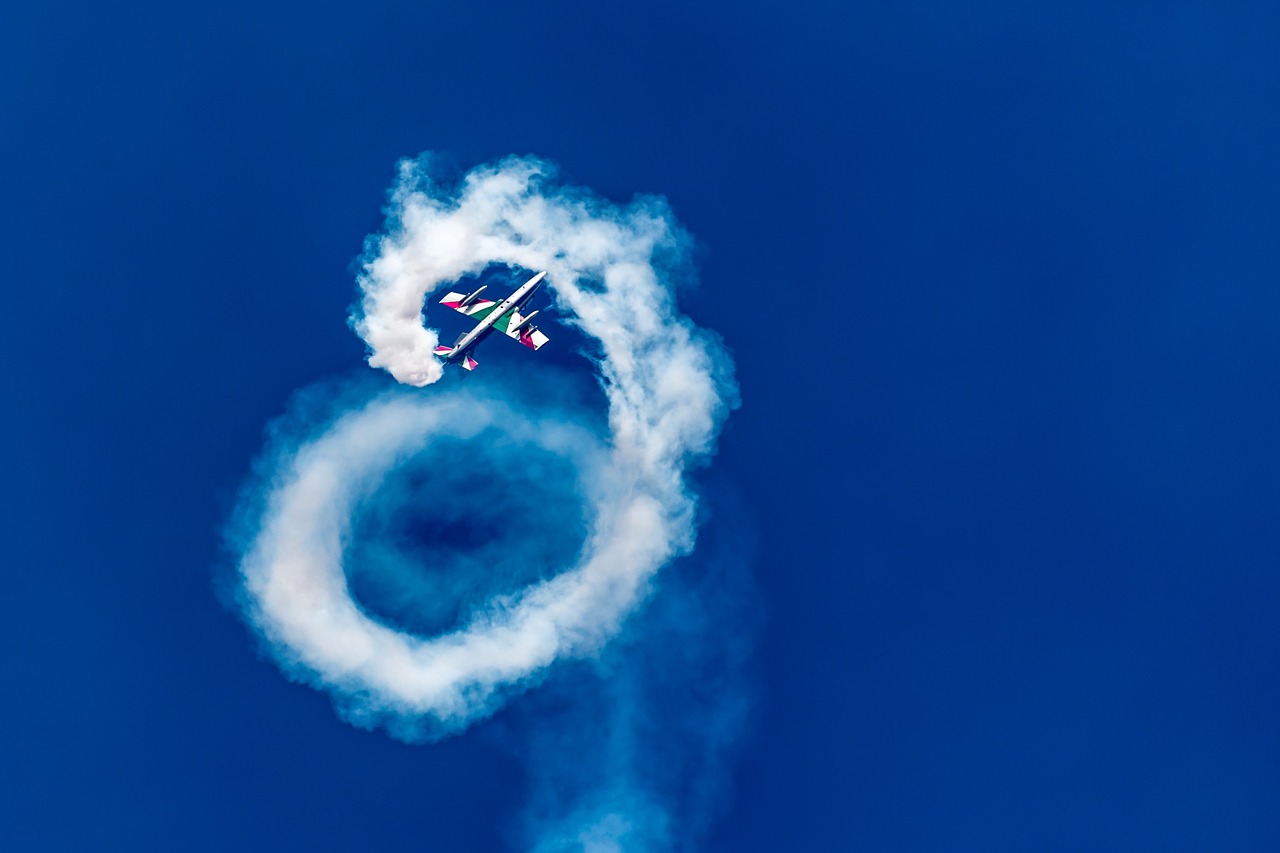 If you've ever attended an air show, you've likely noticed the thick smoke that accompanies the aerobatics. An independent installation produced this smoke using a special smoke oil.

The Black Cats first used a smoke effect to enrich their acrobatic show in 1957 at Farnborough. Before becoming a major component of air shows, smoke oil was developed and used for skywriting.

Today, most performances utilize smoke. Not only does smoke enhance the effect of the maneuvers, it also makes performances safer. Smoke facilitates better visibility of aircraft and flight trajectories. Pilots gain better control of the flight situation and positioning of the other aircraft in formation.

And if you're an air show attendee, don't worry--smoke oil is not like engine exhaust fumes.

When choosing a smoke oil for air shows, safety is key. Make sure you only use oils of the highest quality that are non-toxic. White Lightning Aerobatic Smoke Oil is biodegradable, has a low viscosity, can be readily vaporized, and produces a thick, white, non-toxic smoke.

This smoke oil can be used in both piston engine and jet engine-powered aviation aerobatic flight displays. It is not classified as either a physical hazard or environmental hazard under GHS criteria. As with any machine oil, smoke oil should be handled with care.

To take your airborne acrobatics to the next level, shop Smoke Oil at AviationOilOutlet.com today!