It might seem reasonable to assume that aerial warfare didn't begin until the 20th century-after all, that's when the Wright Bros invented and flew the first successful airplane (The Wright Flyer). In a way, this is completely valid. However, technically speaking, the history of aerial warfare is an ancient one. 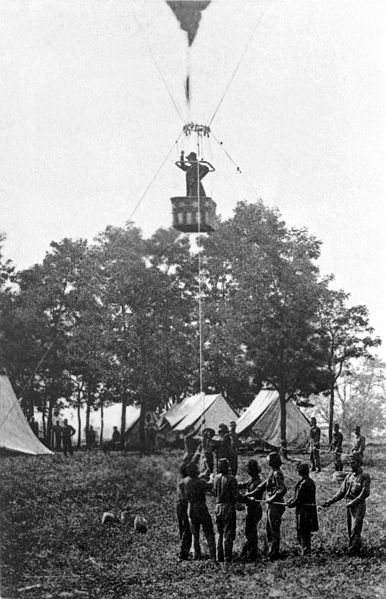 The first use of an aerial instrument during times of war goes back as early as 200 BC China. Records of kites are prevalent in Chinese history, and these records suggest that some of the earliest uses for kites were in war. These man-carrying kites were used to spy for military intelligence and communication.

By the third century, air warfare progressed from kites to balloons. A prototype hot air balloon was invented in China in or around the 2nd or 3rd century, and used as a military communication station. Balloon warfare was also used in Europe, beginning in the 18th century. In 1794, the French Aerostatic Corps used a tethered balloon at the battle of Fleurus in gain a vantage point.

By the time of the American Civil War, the use of aeronautics in support of battle had significantly increased. Thaddeus Lowe was a noteworthy contributor to the Union war effort with his fleet of balloons. Lowe's first act occurred in July 1861, where he observed Confederate positions at the First battle of Bull Run. He also utilized his position in the air to direct artillery fire on the rebels by way of flag signals. Lowe and other balloonists formed the Union Army of Baloons Corps, which was disbanded by August 1863.

The first time an airplane was used in warfare occurred October 23, 1911. Capitán Carlo Maria Piazza was a pilot in command of an aviation unit of the Italian Royal Army (Regio Esercito). Early airplanes were used for reconnaissance, as was Piazza's role-he flew a Blriot Type XI over the Zanzur oasis (south west of Tripoli, Libya) during the Italo-Turkish War.

The Blriot Type XI was a single-seat, single-engine monoplane measuring 24'11- long with a 27'11- wingspan and an overall height of 8'10-. It's empty weight was 507 lbs. The plane's original configuration included a 35-horsepower cylinder R.E.P engine driving a four-bladed paddle-type propeller. Piazza's Blriot Type XI was modified with an air-cooled 487.14-cubic-inch-displacement, Gnôme 7 Omega seven-cylinder radial engine producing 50 horsepower at 1,200 r.p.m., with a two-bladed propeller.

The aircraft's maximum speed was 47 miles per hour. 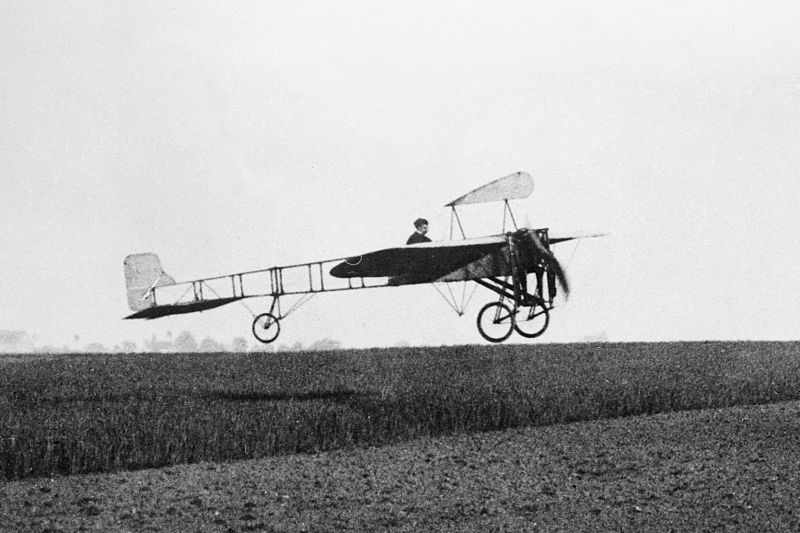 Louis Blériot in flight over field in Blériot XI. May 1909. (US Library of Congress)

During the course of WWI, both sides used both tethered balloons and airplanes for observation purposes-these aerial instruments were used both for gathering info and directing artillery fire. To prevent enemy observation via air, pilots began attacking other planes and balloons. These initial attacks were executed with small arms carried in the cockpit.

French pilot Roland Garros and designer Raymond Saulnier added deflector plates to the back of the propellers in the Morane-Saulnier monoplane, creating the first example of an aircraft able to fire through its propeller-this led Garros to 3 victories in April 1915.

When the Allies developed their own synchronization gears, aerial combat (also known as dogfighting) was born. 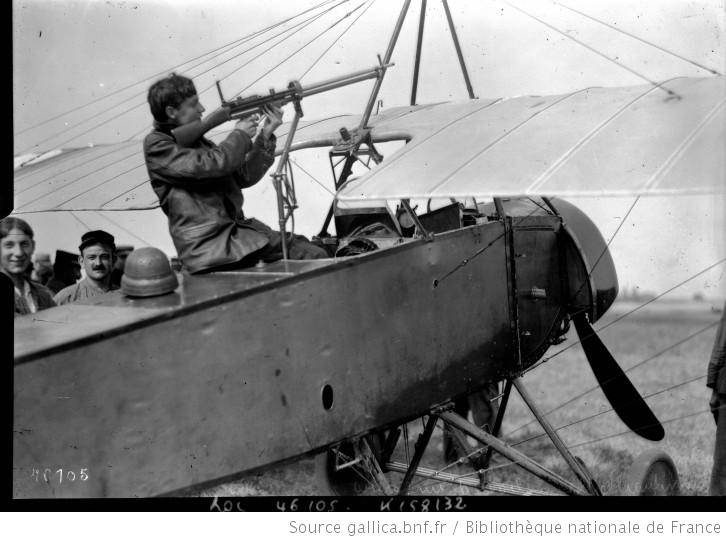 Both the Allies and the Central Powers used aircraft for bombing, strafing, maritime reconnaissance, antisubmarine warfare, and dropping propaganda.

By the end of the war, airplanes had become specialized and developed into bombers, fighters, reconnaissance aircraft.


Where aviation was useful during the course of WWI, military aviation was a major component in all theaters of WWII. Air warfare, coupled with anti-aircraft warfare consumed a major fraction of the industrial output of all the major powers. Germany and Japan depended on air forces that were closely integrated with land and naval forces, while Britain and the U.S. emphasized strategic bombing and, to a lesser degree, tactical control of the battlefield by air and adequate air defenses.

Post-WWII, military aviation was dominated by the needs of the Cold War. Almost all combat military aircraft were swapped out in favor of jet power-this resulted in major increases in both speed and altitude. Rocket research led to the advent of the Intercontinental Ballistic Missile. America focused heavily on intelligence gathering and developed aircraft such as the Lockheed SR-71 blackbird in great secrecy.

Air combat was further changed by the development and increased use of air-to-air guided missiles. Focus, then, shifted to attack aircraft that were highly maneuverable and could fly under the radar at only a few hundred feet in the air.

With the collapse of the Soviet Union in 1991 and the end of the Cold War, Western air forces, such as the US, underwent a shift towards smaller numbers of multi-role aircraft. Aircraft carriers have proved to be effective in the absence of dedicated military or air force bases.

Unmanned aerial vehicles (UAVs) have dramatically revolutionized aerial warfare to the point where their growing capability begs to question the survivability and capability of manned fighter jets.

For more information on the history of UAVs, check out our 3 part series: WWI, Interwar Years & WWII, and The Cold War.