After World War I, the aviation industry advanced exponentially. These advancements (particularly within the air transport sector) hindered the testing and operation of unmanned systems.

As post-war hostilities decreased, so did military interest in unmanned flight; however, both advancements in radio and continued interest in radio-controlled aircraft (by enthusiasts) continued in spite of this.

A year after WWI ended, the Army conducted 14 tests on the Kettering Bug. The Navy continued similar tests for a while; the final aerial torpedo test flight occurred April 25, 1921. It ended in failure. Military interest in such technology waned and further tested were discontinued.

On May 11, 1922, the Bureau of Ordnance directed the Proving Ground at Dahlgreen to acquire one of the original N-9 aircraft used in the Navy's aerial torpedo experiments and outfit it with a Norden radio-control system.

Tests were ongoing over the course of 14 months. However, after an unsuccessful flight on December 11, 1925, interest in the project once again dropped.

Though the project wasn't cancelled, nothing would become of radio-controlled aircraft until 1936. 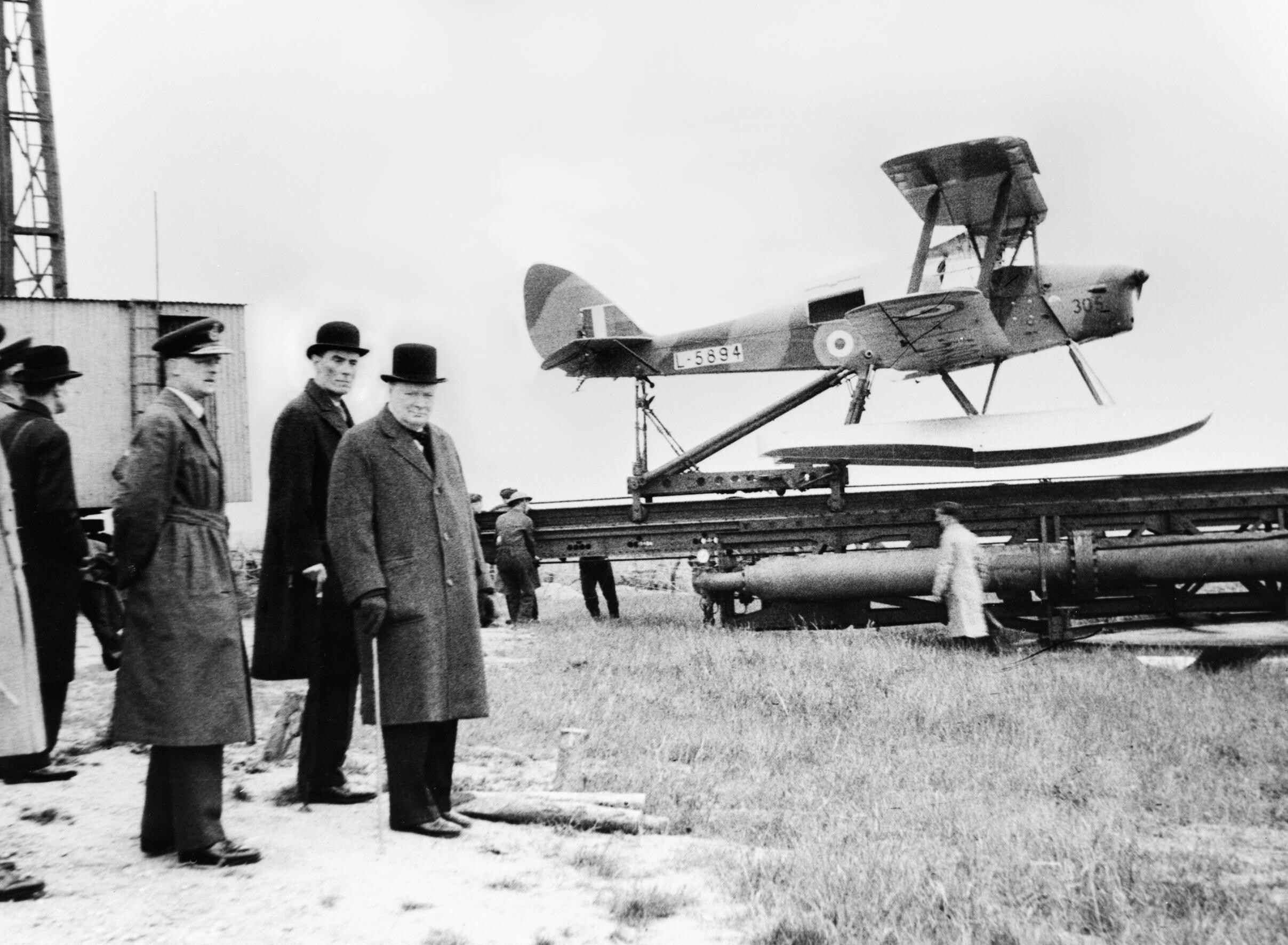 Winston Churchill and the Secretary of State for War waiting to see the launch of a de Havilland Queen Bee radio-controlled target drone, 6 June 1941

While US production of UAVs was hampered by minimal interest among military officials during the 1920s and early 30s,  the Royal Air Force worked throughout the 20s on a dual-purpose, radio-controlled aircraft to serve as both an aerial target and as an aircraft capable of weapons delivery. These efforts led to a radio-controlled reconnaissance float plane, "Fairey Bee," as well as an all-wood version of the Havilland Tiger Moth, -Queen Bee,- (which was used in service through 1943).

In 1936, The US Navy was directed to proceed with the development of radio-controlled targets. Lieutenant Commander Delmar S. Fahrney was put in charge of the Radio-Controlled Aircraft Project on July 20, 1936.

It was in 1936 when Fahrney first introduced the term drone for aerial targets.

Drones were used as aerial targets for the first time in the US on August 24, 1938. 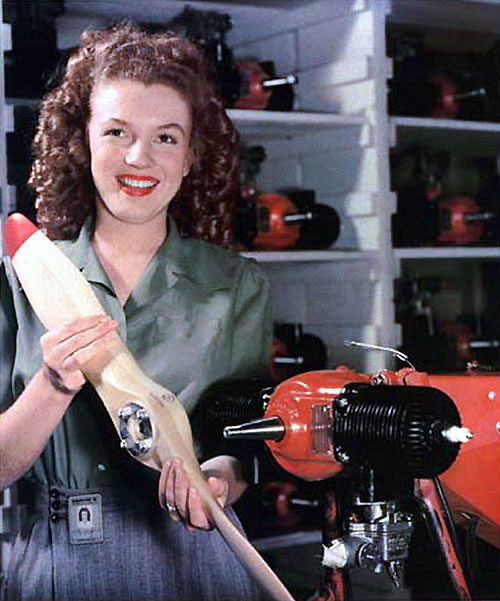 After the initial launch of drones on August 24, use of such aerial targets continued until they became routine by the following year. By now, the Navy had committed to funding and developing assault drones.

Because of his work, Fahrney recommended the revival of WWI's aerial torpedo project and the investigation of using radio control for testing new aircraft. Tests conducted in March 1939 at Guantanamo bay, Cuba, led the US Army to contract with Reginald Denny-a British actor who moved to Hollywood and started his own radio-controlled aircraft company, Radioplane.

Denny supplied the US Army Air Corps with aerial targets and nearly 4,000 drones over the course of WWII.

Radioplane was eventually acquired by Northrop Grumman. They continue to produce UAVs today.

While much of the world was engaged in a war spreading across the globe, the U.S. continued to work on perfecting radio-controlled aircraft; the goal was to use such aircraft for weapons delivery and as guided missile platforms.

With the advent of WWII, the Navy revived the aerial torpedo concept initially conceived during WWI.

At the beginning of 1942, Rear Admiral John H. Towers (Chief of the Bureau of Aeronautics) backed the development of a radio-controlled aircraft able to conduct offensive operations while carrying a torpedo or depth charge.

The Navy requested 500 assault drones and 170 mother aircraft in preparation for entry into WWII. Based on these successes, Rear Admiral Towers also proposed assigning obsolete aircraft (such as TBD Devastator, SB2C Helldiver, and SB2D Destroyer) to the program.

In May 1942, -project option- was initiated to expedite the development and use of target drones as guided missiles in combat. Under this project, drones manufactured by Interstate Aircraft and Engineering Corporation were designated TDR-1 and outfitted with television guidance systems and controlled from trailing TBF Avenger.

On August 29, 1943, the Navy established Special Air Task Groups (STAG) to operate drones. Between July and October 1944, STAG-1 executed 46 missions against Japanese targets; of the 29 that reached the target area, 18 were successful. The unit was disassembled October 27, 1944.

On the other side of the world, the U.S. Army Air Forces and U.S. Navy were working on similar, uncoordinated efforts. On July 6, 1944, The Air Force Atlantic Fleet formed a special air unit to convert PB4Y-1 Liberator bombers to assault drones. The first mission of -Project Anvil- was flown unsuccessfully on August 12, 1944. Joseph P. Kennedy Jr. (JFK's oldest brother) was killed during Project Anvil when his aircraft exploded in midair.

During WWII, the USAAF initiated a secret program, Operation Aphrodite. Operation Aphrodite served a dual purpose for the U.S. Eighth Air Force: an experimental method of Destroying German Vengeance weapon production and launch facilities, as well as a way to dispose "war-weary" bombers. Major General James H. Doolittle proposed the idea in 1944: fill aircraft taken out of operational service with explosives and fly them via remote control into bomb-resistant fortifications.

Because safe takeoffs from a runway weren't really feasible with remote controlled aircraft, one or two volunteers would fly the aircraft to 2000 ft. altitude. They would prime the explosive payload and parachute out of the cockpit. Once ejected, the "mothership" would direct the aircraft to the target.


The first 6 Aphrodite flights, which took place on August 4 and 6, 1944, were only moderately successful. Doolittle ordered a failure investigation due to the problems-the Air Forces concluded the Operation wasn't successful against "hard targets," and instead sent them against industrial targets. Neither mission was very successful, either. 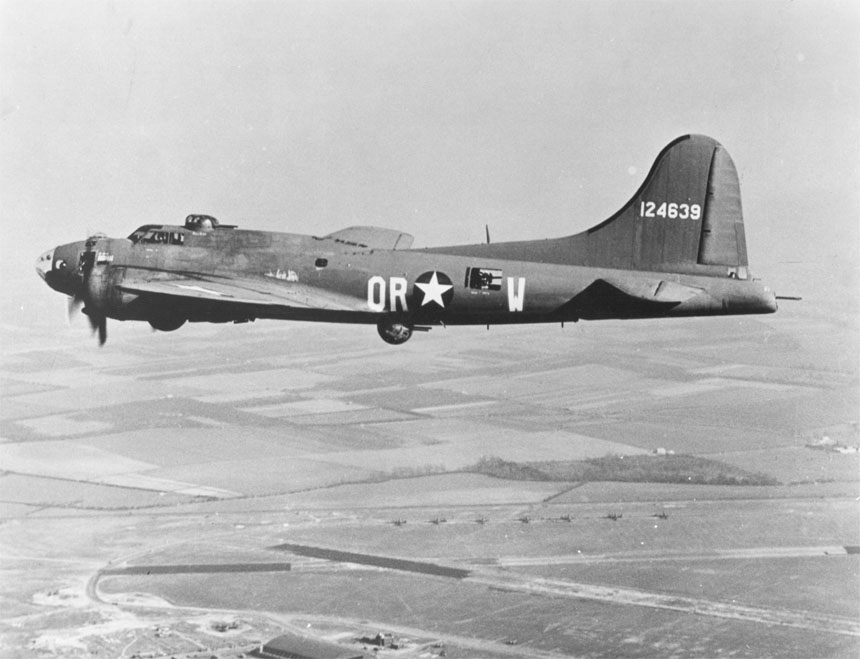