When we think of unmanned aerial vehicles (UAVs), it's easy to limit our thought to present-day UAVs-after all, drones have been receiving a lot of media attention lately. While modern drones and remotely piloted vehicles (RPVs) have become critical to the US Military due to their advancements, the development of such vehicles is, like so much in the aircraft industry, historical.
Modern warfare is driven by drones-but this wasn't always the case. Such UAVs can trace their origins back to the beginnings of WWI, but it wasn't until the late 20th century when they became an important force in the War on Terror.


There are 3 classes of UAVS:


Modern drones and missiles would not exist without the early historical developments of UAVs.

Technically the earliest use of unmanned aerial vehicles for warfare occurred in 1849 when Austrians attacked the Italian city of Venice via unmanned balloons loaded with explosives. However, these balloons don't generally meet modern definitions of UAVs. Therefore, it is generally accepted that start of UAVs lies with World War I.


During WWI, both the United States Navy and Army experimented with aerial torpedoes and flying bombs. Historically, -aerial torpedo- referred to flying bombs and pilotless drone aircraft used as weapons (the precursor to modern cruise missiles).

Early US efforts consisted of combining wood and fabric airframes with either gyroscope or propeller revolution counters to carry explosives. These UAVS faced operational problems: crews struggled to launch and recover UAVS and had difficulty stabilizing them during flight. Though efforts were mostly failure, limited development continued.

Elmer Sperry (the man behind the invention of the gyroscope) became interested in the application of radio control to aircraft in 1911 (less than a decade after the beginnings of manned flight). With financial support and assistance from the Navy, the application of the gyroscope successfully stabilized aircraft flight. Dr. Peter Cooper Hewitt (known for his work in radio) joined Sperry. Both became members to the Aeronautical Committee of the Naval Consulting Board.

Carl Norden joined Sperry and Hewitt by 1916 and developed the concept for aerial torpedoes.

Also by 1916, Western Electric Company was working on radio devices. This led to navy-funded research on whether radio control could be used to fix the aerial torpedo problems. Radio technology at the time was too immature to be of much use, however; efforts were then focused on maintaining course and measuring distance to target.

On November 10, 1917, Glenn Curtiss (inventor of the flying boat) delivered an airframe designed to carry 1,000 pounds of artillery for 50 miles at 90 mph. On March 6, 1918, the Curtiss-Sperry aerial torpedo made its longest successful flight (1,000 yards). Pilotless flight experiments continued.

On October 17, 1918, a pilotless N-9 aircraft was successfully launched, but failed to land.

Having witnessed the Navy's aerial torpedo test in 1917, the Army was not about to be left behind. The U.S. Army Aircraft Board asked Charles Kettering (inventor, engineer, businessman, and founder of Delco Electronics Corporation) to design an unmanned -flying bomb- capable of hitting a target at 50 miles. Orville Wright was the airframe consultant and Childe H. Wills (of Ford Motor Company) was the engine consultant on the project, which was eventually called the "Kettering Bug." 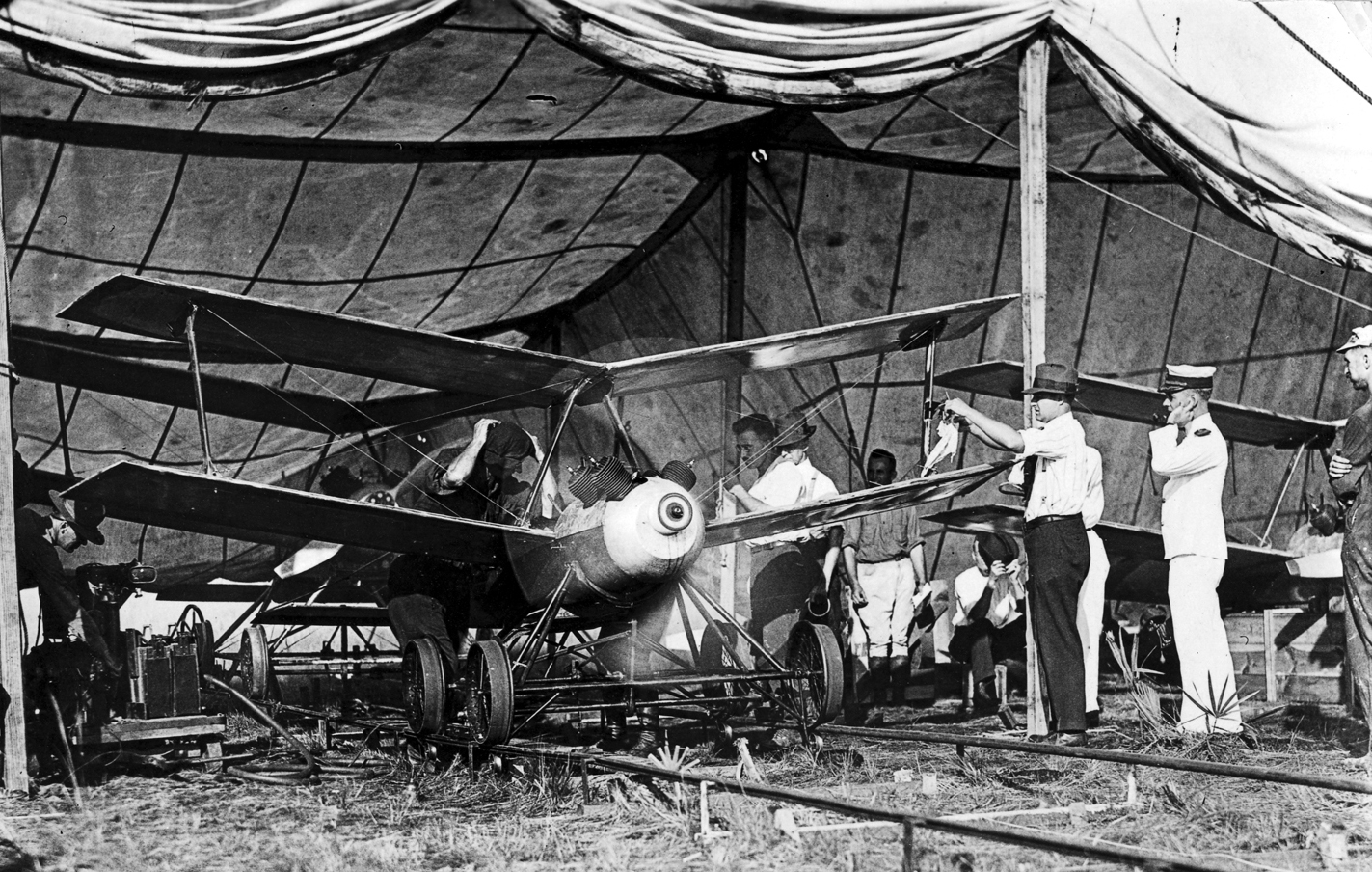 The Bug was designed with a small on-board gyroscope that guided the aircraft to its destination at approximately 120 mph. Control was maintained using a pneumatic/vacuum system, electric system, and an aneroid barometer/altimeter. To ensure the bug hit its target, a mechanical system tracked the distance it flew; technicians plotted the craft's trajectory and predicted approximately how many engine revolutions were necessary to reach its target. When the aircraft reached the end of its estimated time elapse, the engine turned off and the wings discarded-the bug then began a ballistic trajectory  into the target.

The prototype was completed towards the end of WWI. In January 1918, the Army ordered 25 Bugs. Flight tests began in September, and it wasn't until October 1918 when the Bug had its first successful flight. The Bug failed its testing with only an approximate 22% success rate.

Like the Navy's aerial torpedo, the Bug never saw combat.

UAV development would be impacted, post-WWI, by advancements in the aviation world.