As one of America's Early aviators, Katherine Stinson set numerous flying records, including ones for distance, endurance, and aerobatic maneuvers. In July 1912, she became the fourth woman in the United States to obtain a pilot's certificate.

Katherine Stinson was born in Fort Payne, Alabama, on February 14, 1891. It would be twelve years later when Orville and Wilbur Wright would make their first successful heavier-than-air flight.

As a young woman, Katherine loved playing piano and dreamed of studying music abroad so she could be a piano teacher. Initially introduced to aviation in 1911 when she participated in a balloon ascension, Katherine had an idea: she would learn how to be a stunt pilot and use that money to pay for her trip to Europe.

Convincing her parents to let her fly wasn't the challenging part; what was difficult was convincing someone to teach her. In January 1911, she went to Tony Jannus of St. Louis. However, he would only allow her to fly as a passenger so she turned to one of the Wright Brothers' pilots, Max Lillie. Lillie, one of the early great aviators, had found his way to Chicago after emigrating from Sweden. Initially, he refused on the basis that she was a woman, but Katherine managed to persuade him to take her up in a plane. After a few hours of instruction, she was flying alone and Lillie agreed to instruct her in stunt flying.

Pretty soon, her means to pay for a music career overtook piano completely. Instead of becoming a piano teacher, she dreamed of becoming an aviator. Less than a year after discovering flight, Katherine Stinson received her pilot's license on July 24, 1912, at the age of 21. 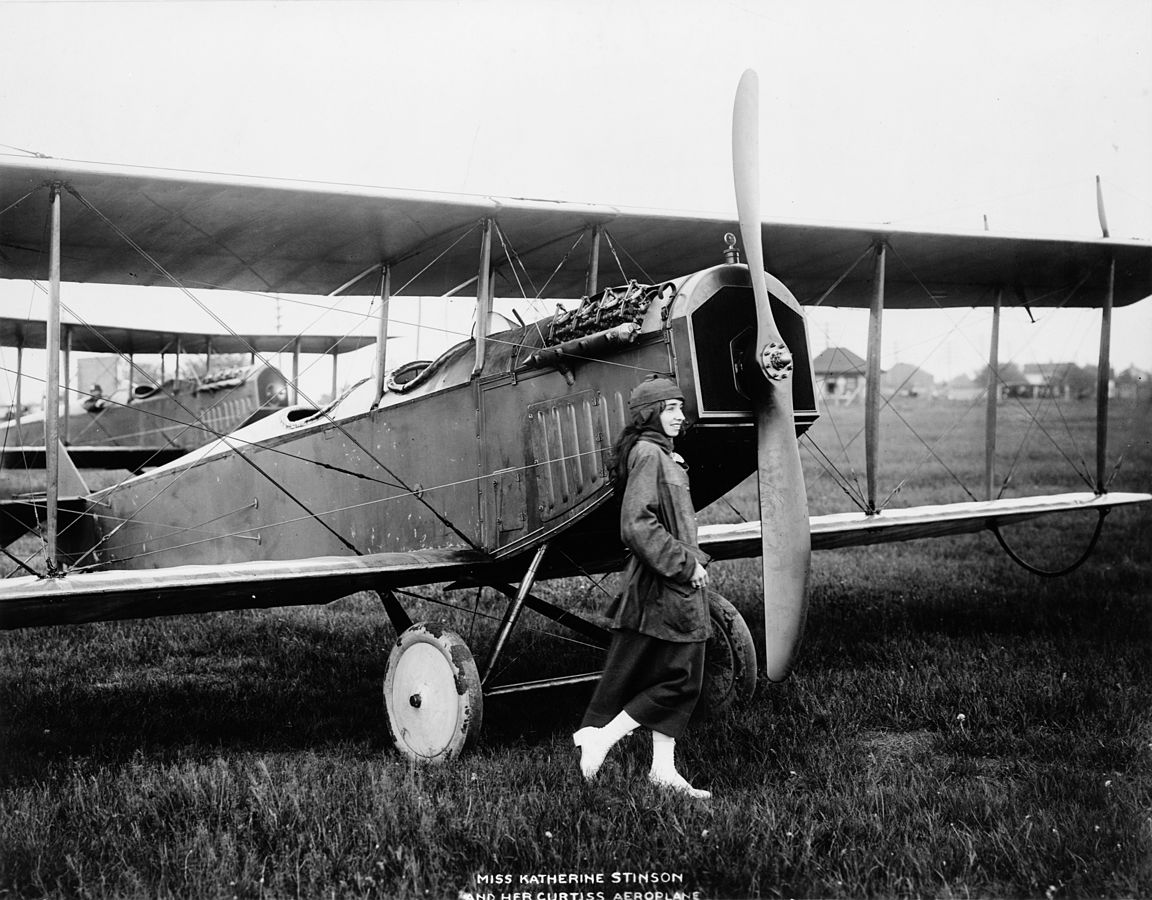 A year after becoming a licensed pilot, Katherine Stinson began exhibition flying. While on the circuit, she was billed as the "flying schoolgirl." Though she told the papers she was, in fact, 21, they refused to believe her and claimed she was 16.

While she didn't travel to Europe to study music as she originally intended, she did travel across the country and appear at various air shows. During these shows she performed a variety of impressive stunts, including diving 1,000 feet, racing automobiles and turning loops.

Katherine's flying feats also inspired other members of her family to become involved in aviation. In 1913, Katherine and her mother, Emma Beavers Stinson, incorporated the Stinson Aircraft Company in Hot Springs, Arkansas. Her younger sister, Marjorie, and her two younger brothers, Jack and Eddie, also took up flying careers. Shortly after, the family established the Stinson School of Flying in San Antonio, Texas. Katherine, Marjorie, and Edward taught there. Their brother Jack conducted his own flying school.

Katherine Stinson became the first woman and fourth pilot in the U.S. to master the loop-the-loop stunt, but she also pioneered other areas of aviation, too. She was the first pilot to fly at night, the first woman authorized to carry airmail for the United States, the first woman to fly to the Orient, and is credited as the first nighttime skywriter. One night in 1915, in Los Angeles, California, Katherine spelled out "CAL" with flares.

With the outbreak of World War I, the United States put out a call for pilots. Though Stinson answered the call, her application was rejected because she was a woman. While she couldn't participate in the air service, she volunteered as an ambulance driver for the Red Cross. She transferred to canteen service when her ambulance was disbanded.

Event though Stinson was out of the plane and out of combat, her service to her country during this time of war proved to be injurious to her health. Ill with tuberculosis, she moved to a sanitarium in Santa Fe, New Mexico. It was there where she met her future husband, Miguel A. Otero Jr., a World War I aviator, and son of territorial governor. The two married in 1928 and both promised to never pilot a plane ever again.

Here Katherine once again traded in her hobby for another, this time architecture. She spent her later years in life restoring old homes.

Katherine Stinson Otto died in Santa Fe in 1977 after battling a long illness. Although she gave up flying in the 1920s, her influences on aviation and aviation history have left a powerful impact.