When you think of warbirds, you're probably not thinking of war birds (or the "The Gang Wrestles for the Troops" episode of It's Always Sunny in Philadelphia). There are a lot of reasons why former military aircraft that are still airworthy are revered. One thing that's for certain is the major role all forms of aircraft played in war. Even before airplanes were technically invented, various forms of aircraft were utilized for early aerial warfare. But airplanes and early flying machines weren't the only flying things utilized during times of war. A much smaller, mammalian bird needs to be credited, too.

Go to any major (or minor) city across the globe and you'll likely encounter more than 1 flock of pigeons. These rats with wings are so common that you probably don't think much of them---unless of course your car, sidewalk, porch, etc. get bombarded by pigeon droppings.

Not everyone has the same sentiment as most New Yorkers, however. Pigeon fanciers--people who practice pigeon keeping--have been around for thousands of years and for as long as people have been breeding pigeons, people have also been using them on the battlefield.

Homing pigeons (a variety of domestic pigeons) are one of the oldest methods of long-distance communications. Their ability to deliver messages over great distances has been utilized during war for at least the past 2,000 years. During the 6th-century BC, Cyrus the Great, King of Persia, used carrier pigeons extensively to deliver important State messages. A pigeon postal service was in operation for 100 years in Baghdad. Pigeons carried reports of the Olympic games to outlying cities during the Golden Age of Greece. In ancient Rome, pigeons were used during chariot races to announce the winners. During the 19th Century Franco-Prussian War, Parisians used messenger pigeons to transmit messages outside the city. The Prussian Army, in turn, employed hawks to hunt the pigeons.

In short: pigeons are like Forrest Gump. Wherever there is history in the making, they're there. And not just ancient history, mind you. Pigeons earned their wings and place of honor in the 20th Century amid greater technological advancements.

During the course of World War I both sides utilized pigeons extensively to carry communications. Pigeons were integral at a time when advanced telecommunications had yet to be developed. It's estimated that at least 100,000 pigeons were used by both sides with a 95% success rate.

Can you read me now?

In Germany, pigeons were used as messengers and reconnaissance photographers. The German aviators would outfit pigeons with tiny rapid-fire cameras strapped to their bellies and release the birds from airplanes within enemy territory. The birds would then fly back home, all the while photographing potential enemy terrain. 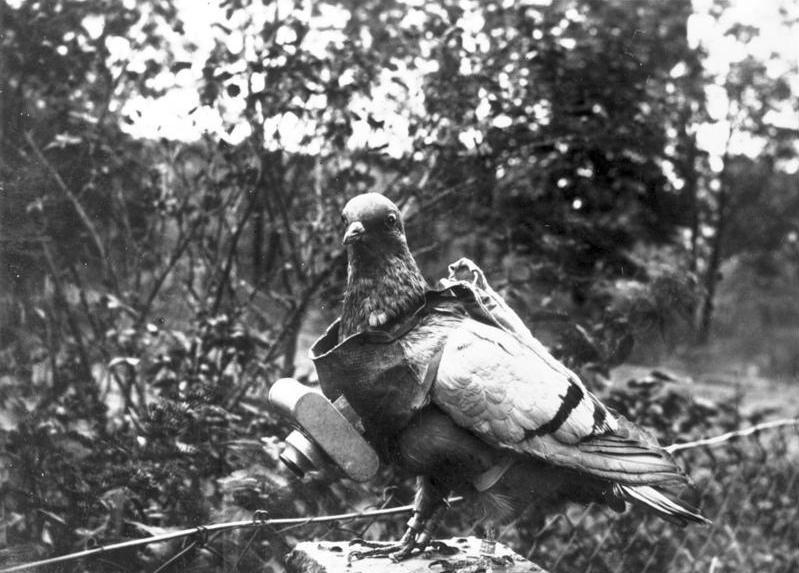 In 1917, the U.S. Army Signal Corps established a pigeon service. The Signal Pigeon Corps was assigned the task of training and utilizing homing pigeons for communication and recon. At the start of the war, fanciers in Great Britain donated the pigeons and the American soldiers trained them. The U.S. Army Signal Corps used 600 pigeons for communication.

The U.S. Navy aviators had 12 pigeon stations in France and more than 1,508 pigeons by the end of WWI. Pigeons were brought into airplanes to deliver messages. Depending on the aircraft, airmen would throw the messenger pigeons up or down (to keep the bird out of the bird's propeller and away from airflow toward the aircraft wings and struts). 219 messages were delivered successfully and only 11 pigeons went MIA.

Although communication technology had vastly improved in the interwar years, homing pigeons still played an integral role in supplemental and emergency communications during WWII. For the US, wherever the Army, Navy, Coast Guard, or Marines went, pigeons were likely there, too. Sometimes pigeons were the only means of communication for more advanced observation posts. Both terrain and proximity to enemy lines made it impossible to string a wire or use a radio.

In 1943, the U.S. Army Signal Corps established their own breeding program. Young, healthy pigeons were either purchased or donated by pigeon clubs and fanciers. Some fanciers contributed the offspring of champion birds--and even sometimes the champions themselves. Some prize-winning birds had covered more than 600 miles in a single day. These donated birds arrived by the thousands. 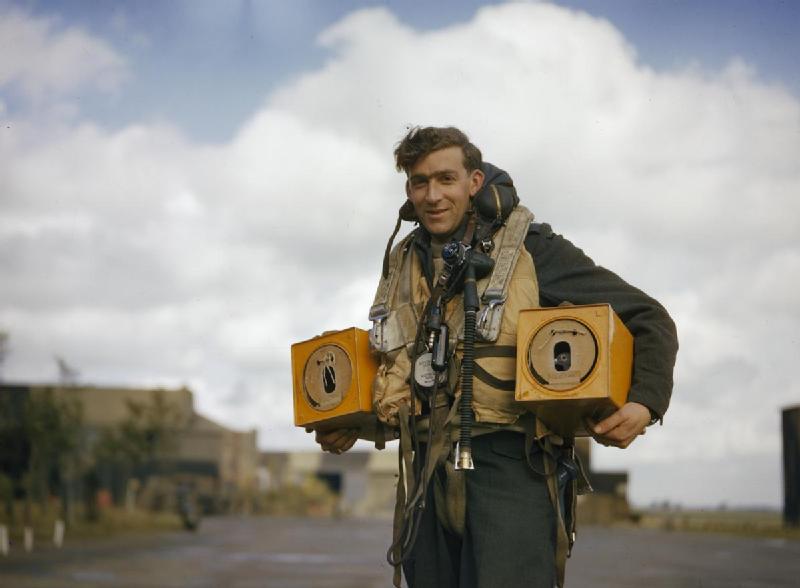 The pigeon service was a success, which prompted the US Army Air Forces to expand their pigeon communication capabilities. Pigeons were standard on some American bombers. On B-17 bombers, for example, the airmen discovered the birds didn't need special equipment to survive the high altitude. Paratroopers had special vests to carry a pigeon on his chest or side. A pigeon named Thunderbird was the first paratrooper pigeon and the first to make 10 jumps from an aircraft. The army also later developed a special cage and parachute for dropping pigeons from planes to supply isolated troops with a means of communication. It also dropped thousands of birds over the countryside during the June 1944 Normandy Invasion.

The United Kingdom alone used approximately 250,000 pigeons for a number of purposes, including communications with spies behind enemy lines. The Air Ministry (the government department responsible for managing the Royal Air Force's affairs) had a Pigeon Section during the war and a Pigeon Policy Committee made decisions about the uses of pigeons in military contexts. In 1948, the UK military didn't see the further need for pigeon use. The Swiss army disbanded their pigeon section in 1996.

These are just a few of the many birds who really earned their wings during the two world wars: 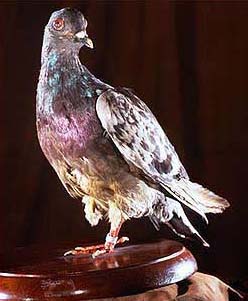 This Blue Check hen was awarded the Croix de Guerre Medal with a palm Oak Leaf Cluster for her heroic service during WWI. She was donated by a British pigeon fancier and used by the U.S. Army Signal Corps. In October 1918, Cher Ami helped save about 200 men when she successfully delivered this message from Major Charles White Whittlesey:

We are along the road paralell to 276.4. Our own artillery is dropping a barrage directly on us. For heavens sake stop it.


Cher Ami was shot down but managed to regain flight and deliver the message back home. She was shot through the breast, blinded in one eye, and her leg was barely hanging on. She managed to survive and the one-legged bird was sent back to the United States. She died at Fort Monmouth, New Jersey, on June 13, 1919 from her battle wounds and was later inducted into the Racing Pigeon Hall of Fame in 1931.

This blue-checked pigeon ended the war as the most celebrated pigeon of World War II. On October 18, 1943, G.I. Joe saved the lives of the inhabitants of Calvi Vecchia, Italy, and of the British troops of 56th Infantry Division occupying it.

An American infantry division called for the aerial bombardment of German-occupied Colvi Vecchia. The Germans retreated, however, and the 56th Infantry Brigade moved into town only minutes before the bombing. Radio attempts to cancel the attack failed. This is where plan B (or plan P) came in. G.I. Joe was sent with the message to abort their bombing.

Mary of Exeter flew many missions with the National Pigeon Service, delivering top secret messages across the English Channel between England and France. In November 1945 she was awarded the Dickin Medal for her endurance despite multiple injuries.

Mary was wounded in three separate attacks and even survived a Luftwaffe bomber attack on her pigeon loft in Exeter, England. In one instance, she was attacked by a German hawk and sustained wounds to the neck and right breast. She returned to service two months later. She was also shot, an injury that took off the tip of her right wing. Three pellets were removed from her body and despite her wing injury, she passed flight tests and returned to service (albeit with a shortened wing). During her last mission, Mary's neck muscles were wounded by shrapnel. Her owner made her a leather collar (to hold her head up) and took her out of service. Luftwaffe raids in Exeter destroyed her loft and killed many of the pigeons housed there--but not Mary.

The PDSA Dickin Medal, instituted in 1943, is the highest honor awarded to animals who displayed "conspicuous gallantry or devotion to duty while serving in military conflict." The medal was awarded 54 times between 1943 and 1949 – and 32 of the recipients were pigeons.

Be sure to check out our stories on Antis the German Shepherd and Smokey the Yorkshire Terrier!