Between 1942 and 1945, the U.S. Navy received more than 150 airships for the war effort. The military used these blimps, produced by the Goodyear Corporation, as convoy escort vessels. The Navy used them to spot enemy submarines and drop depth charges on those they encountered.

But of all the airships utilized during World War II, there is perhaps none quite as famous as the L-8 ghost blimp.

An Ordinary Day with L-8

Early in the morning of Sunday, August 16, 1942, a Navy airship left Treasure Island in San Francisco Bay, California. Their mission: search for Japanese submarines off San Francisco and sink them. While the United States had only entered the war nine months prior to this day, Japanese subs had done a number to the Allied fleet, including sinking at least six Allied ships off America's West Coast.

It's probably a safe bet to say that, given tensions in the Pacific at this time, the folks living along the California Coast were accustomed to seeing Navy airships-particularly around the San Francisco area. However, I don't think anyone was expecting what happened to this particular blimp-or its crew. 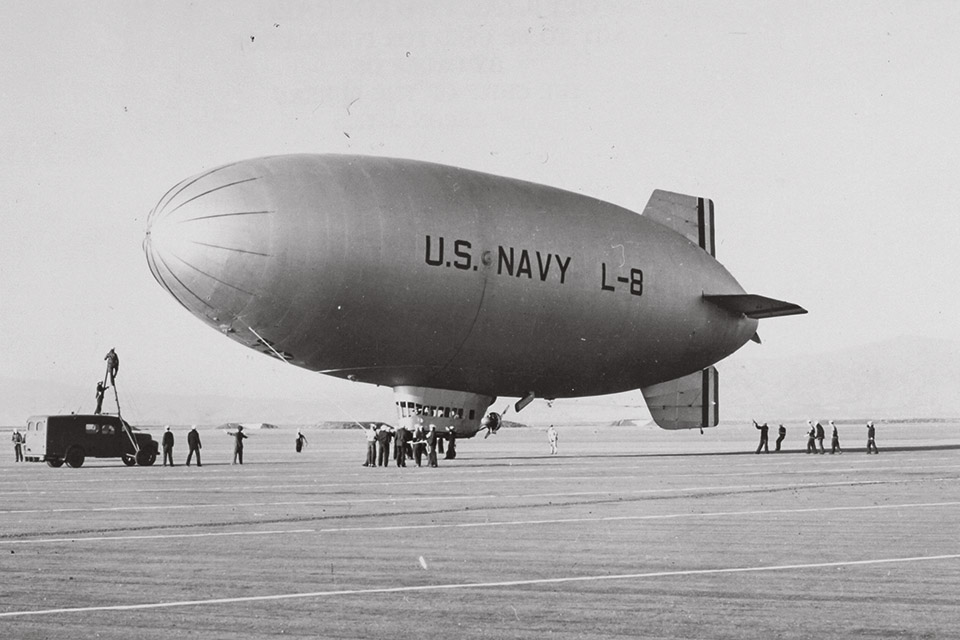 
For all intents and purposes, both Lieutenant Ernest Cody and Ensign Charles Adams were in the ship's gondola when it departed from Treasure Island. Cody, the pilot, was 11 years younger than Adams and only had 756 hours of LTA flight time, compared to Adams' 2,281 hours. Despite his lesser experience, Cody had proved himself a rather capable pilot in April 1942 when he'd flown L-8 to deliver precious cargo to USS Hornet (CV-8). This bumped along his promotion.

Ensign Adams, on the other hand, had 20 years' experience with LTA craft, was a veteran of the Navy's giant rigid airship program, and had served aboard Los Angeles (ZR-3), Akron (ZRS-4) and Macon (ZRS-5). He had even been decorated by the German government for rescuing Hindenburg passengers. Despite his experience, this was his first LTA patrol as an officer.

The airship (which had a reputation as an excellent flier) was scheduled to fly from Treasure Island to the Farallon Islands 30 miles west of San Francisco. Then L-8 was to head north to Point Reyes and south to Montara Beach before returning to Treasure Island. In total, the patrol would take approximately four hours. Lt. Cody and Ensign Adams were expected back around 10:00 or 10:30 AM.

Spoiler alert: they didn't make it back and no one actually knows what happened to them.

But here's what we do know. They lifted off at 6:03 AM with Cody at the controls. The day was slightly overcast, but visibility was still ok. Winds were light and variable at 4 knots per hour, with a ceiling of 800-to-1,000 feet. They passed over the Golden Gate Bridge and headed to the Farallon Islands. About an hour and a half into the patrol, Cody radioed their position. At 7:38 AM, they were four miles east of the Farallons.

Four minutes after their transmission, Cody sent a second message: -Am investigating suspicious oil slick-standby.- This would, unbeknownst to anyone, be their last transmission.

A fishing ship and Liberty ship both observed the blimp around the time Cody and Adams were suspicious of the oil slick. The blimp passed low and witnesses saw the crew in the gondola. At around 9 am, the L-8 headed back north, even though this didn't match their scheduled path. There was no explanation for this change and no more radio contact. At 10:50 am, a Pan Am pilot reported seeing the airship near the Golden Gate bridge. It was flying steadily and clearly under pilot control. However, around 11 am, a Navy search plane spotted the L-8 flying at a dangerous altitude-but still flying smoothly. The blimp disappeared behind cloud coverage. Another pilot and a witness on the ground both spotted the L-8 a little later. This witness reported the blimp appeared it be -bent- in the middle. Fifteen minutes later, the blimp was spotted with its motors off, hovering 50 feet above the water, and noticeably sagging. 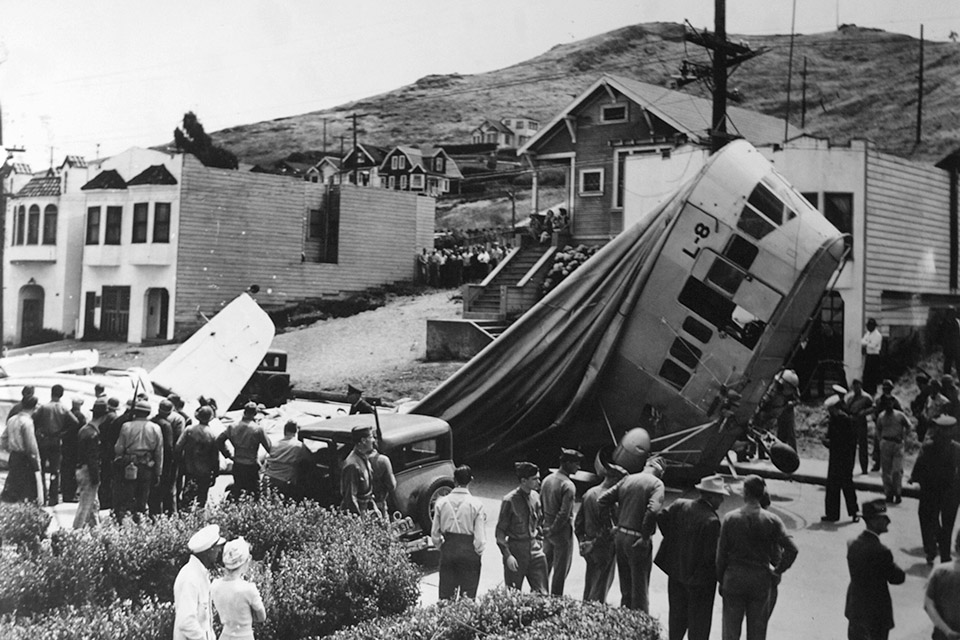 The wind blew the blimp along until it crashed into a house in Daly City and came to a resting stop on the family's car.

When the authorities arrived, the cockpit was empty. There was plenty of fuel, the radio was in perfect working order, the parachutes and lifeboats were stowed away, and there was only minor damage to the ship. Sensitive material was untouched. Overall, there wasn't anything strange going on with the L-8-except for no sign of the two crewmen.

The Navy immediately began investigating this crashed -ghost blimp- and carried out a massive search of the area. However, nothing ever turned up that could explain the mysterious disappearance of Lieutenant Ernest Cody and Ensign Charles Adams.

The fate of Cody and Adams remains a mystery. The L-8 itself reentered service, later becoming the Goodyear Blimp, flying until 1982.

For more information on airships, read about Ferdinand von Zeppelin (AKA the man behind the Zeppelin) here!