Not every fighter pilot was considered an ace during World War I, let alone the ace of aces. But for Eddie Rickenbacker, that's precisely what he was.

An Early Life (With a Purpose)

Edward Vernon Rickenbacker was born on October 8, 1890 in Columbus, Ohio. His parents were German-speaking Swiss immigrants and he was the third of eight children. The son of a day laborer, Rick didn't have the easiest life growing up, nor was he the easiest child.

From his father, he learned to never procrastinate and that, -a machine has to have a purpose.- Rick never forgot the values his father instilled upon him from an early age; however, his mischievousness and penchant for near-death experiences also followed him into his adult life.

At the age of five, he picked up smoking and became the leader of his neighborhood's collection of mischievous youth. While he was with this -Horsehead Gang,- young Rickenbacker experienced his first brush with death. Growing up, Rickenbacker lived near a mine. One day when he was only eight years old, he led his gang down a slide in a steel cart into a deep gravel pit. The cart flipped and landed on him, cutting deep into his leg-to the bone.

When he was just twelve years old, his father died. He quit school and took on a number of jobs to earn money for his family. It was with this tragedy that Eddie Rickenbacker turned his life around and became a responsible teenager.

"That day I turned from a harum-scarum youngster into a young man serious beyond my age," he later recalled.

From a young age, Eddie loved machines and engines and it became his dream to someday drive his very own fast and powerful car. At 16, he took the steps to make this a reality by taking a mechanic job for race car driver Lee Frayer.  He taught himself as much as he could and even enrolled in a correspondence course in engineering. He also became a salesman for the Columbus Buggy Company.

Eventually, Rickenbacker did become a well-known race car driver. He competed in the Indianapolis 500 four times before World War I and earned himself the nickname "Fast Eddie."

He had his first ride in an airplane in 1916. Despite his fear of heights, it set his mind on a new course of action.

The Ace of Aces


Eddie Rickenbacker wanted to join the Allied troops before the United States had even entered the war. He even had the idea of recruiting his fellow race car driver friends as fighter pilots. While he believed that such individuals were already accustomed to traveling in tight spaces at high speeds, the military ignored his suggestion.

He did enlist in the US army, but he struggled to gain permission to fly. For one, he didn't hold a college degree. He was also, at this point, twenty-seven years old, which meant he didn't qualify for flight training due to age restrictions.

Rickenbacker's reputation as a race car driver was enough to make him a sergeant, though, and the army shipped him off to Europe. He trained in France with some of the first American troops where he arrived as a Sergeant First Class on June 26, 1917.

While he was assigned as engineering officer due to his mechanical abilities, he practiced flying in his free time. He learned to fly well and was only a student pilot for seventeen days. He was commissioned lieutenant and his first assignment was with the newly-formed 94 th Aero Squadron based near Toul, France. 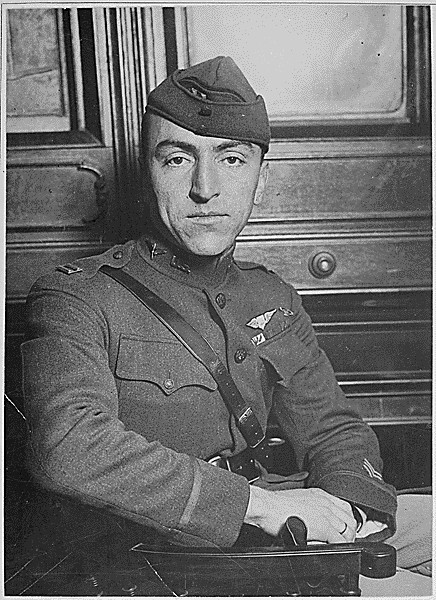 Rickenbacker developed his own special techniques when it came to aerial fighting. He had his first shared victory on April 29, 1918, and his first solo conquest May 7. While battling with the infamous German Jagdgeschwader 1, known as the -The Flying Circus-, Rickenbacker flew closer to the targets than any other pilot dared, before firing his guns. On May 28, Rickenbacker shot down his fifth plane which earned him ace status. The French awarded him the Croix de Guerre.

On May 30, he earned his sixth victory. His seventh wouldn't occur for over three months.

As a captain, he was made commander of the squadron on September 24, 1918. The next day, he claimed two more German planes. President Hoover belatedly awarded him the Medal of Honor in 1931 for this victory.

After another victory on September 27, he became a balloon buster. Rickenbacker downed observational balloons on September 28, October 1, October 27, and October 30, 1918.

All in all, Eddie Rickenbacker had 26 confirmed victories. This remained the American record until World War II. Additionally, he flew more than 300 combat hours, which was reportedly more than any other US pilot.

Rickenbacker was discharged from the army in 1919 with the rank of captain.

At the end of the war, Eddie Rickenbacker, America's Ace of Aces, was the most celebrated aviator in America. That is until Charles Lindbergh made his solo flight across the Atlantic.

The first cars with four-wheel brakes rolled off the assembly line in Detroit in 1922. However, the company went bankrupt by 1927. This was likely due to bad publicity from other manufacturers (who were selling cars with two-wheel brake systems).

Once he got back on his feet, he bought stock in the Indianapolis Motor Speedway and became its president. He operated the facility for over a decade and oversaw many improvements. He closed the Speedway in 1941 with the onset of WWII and sold it.

On February 26th, 1941, Eddie Rickenbacker had his closest brush with death.

He often traveled for business and one day, while on a Douglas DC-3 airliner, the plane crashed just outside Atlanta, Georgia. Thirteen individuals died, including the two pilots. Rickenbacker suffered grave injuries and barely survived. Despite his near-fatal wounds, he encouraged other passengers and guided the survivors.

His various injuries included a fractured skull, other head injuries, a shattered left elbow with a crushed nerve, a paralyzed left hand, several broken ribs, a crushed hip socket, a pelvis broken in two places, a severed nerve in his left hip, and a broken left knee. Additionally, his eyeball was blown out of his left socket.

It took months in the hospital and a long time at home before he recovered from the accident.

Eddie supported the war effort as a civilian during WWII.  He also partook in missions. In October 1942, Rickenbacker was to deliver a memorized, verbal message from President Roosevelt to General MacArthur. En-route, the B-17 in which they were traveled got lost and ran out of fuel and the pilot was forced to ditch. The eight individuals spent the next 22 days floating on rafts surviving off of rainwater and limited provisions until planes eventually spotted them.

Despite his brush with death (again), Rickenbacker insisted on continuing his mission.

At the Age of 73, Eddie Rickenbacker finally retired from aviation. He died on July 23, 1973, after contracting pneumonia.