"CAUTION: Children (and adults) at play"

Located in Port Orange, Florida, Spruce Creek is a residential airpark (or fly-in community) considered the most famous of its kind. With almost 5,000 residents, 1,300 homes, and 700 hangars (and a few plots still available), Spruce Creek is the largest airpark in the world. Unlike many smaller fly-in communities, Spruce Creek has a 4,000-foot lighted runway with GPS approach, and a private airport at the center, which can, according to their website, "accommodate anything from a Stearman to a Gulfstream."

"Live, work and play in the same spot."


Judging by the town's motto, it's easy to see what fuels the community (apart from aviation gasoline).

Spruce Creek is a close-knit group of individuals that emphasize camaraderie and socialization within their development. Besides their championship golf course at Spruce Creek Country Club, the residents frequently hold community-wide events and social clubs that range from a variety of interests, from flying (no surprise here) to book readings and gardening. With an open-hangar policy (meaning if the door's open, come on in and chat!), Spruce Creek is a community geared for those who are both aviation experts and social butterflies.

Safety is also a key part of everyday life here. 24-hour patrolled security (and invitation-only access) make Spruce Creek one of the safest and most private gated communities in Florida. Because of this, celebrities have sought out Spruce Creek-John Travolta used to be a resident and apparently Tom Cruise and Nicole Kidman stayed there during the filming of Days of Thunder. (Travolta may or may not have been pressured to leave the community, due to an issue with some of planes being too big and noisy for others)

It all started with a bang

Carlos Bravo (a "Spruce Creeker since 1998") has provided an impressive  historical account of how Spruce Creek became, well, Spruce Creek.

A very shortened summary (which doesn't do Mr. Bravo's account justice, really) begins in the 1800s with a small village (modern day Spruce Creek). But flash forward a few years (and a century) to World War II. During that time, the US military was growing their aviation efforts by increasing training facilities and expanding airfields throughout the US. In Florida, land was split between the Navy and the Army to build their training bases. One of the airports near Daytona was designated as a Naval Air Operational Training Base (which is now Spruce Creek).

Post-WWII, the need for so many military facilities declines and many were abandoned. Some, like Spruce Creek, ended up becoming a residential Airpark.

McKinley Conway, an Ensign, USNR during WWII, pioneered the fly-in concept and got the ball rolling on the Spruce Creek project. The project launched in 1970 with Conway and fellow investors to create the "recreational aspects of a secluded place where they could fly their airplanes to."

In the aftermath of the Vietnam War, American economics tanked (in comparison to the previous decade), and by the mid-70s the investors declared bankruptcy. The project was taken over by Thompson Properties, Inc. of Florida and led by Jay Thompson.

Today, of the original military airfield, one runway remains, measuring 4,000 ft x 150 ft. The size and quality of this runway is what allows large jets to land at the Spruce Creek Airport.

Living with your plane

Airparks began developing in the 50s and 60s. Post-WWII, the military downsized and left an abundance of no longer necessary airfields, as well as a large population of experienced aviators. The pilot population skyrocketed from fewer than 34,000 in 1939 to more than 400,000; because of this boom, in conjunction with the deactivated military strips across the country, the Civil Aeronautics Administration proposed the construction of residential airparks, with focus on the Southeast (states like Florida).

The Living with Your Plane Association estimates that there are at least 426 airparks in the United States (and more than 630 around the world). In the US, the state of Florida has the highest amount with at least 70. Texas is a close second with at least 60, and Washington a third with at least 50. 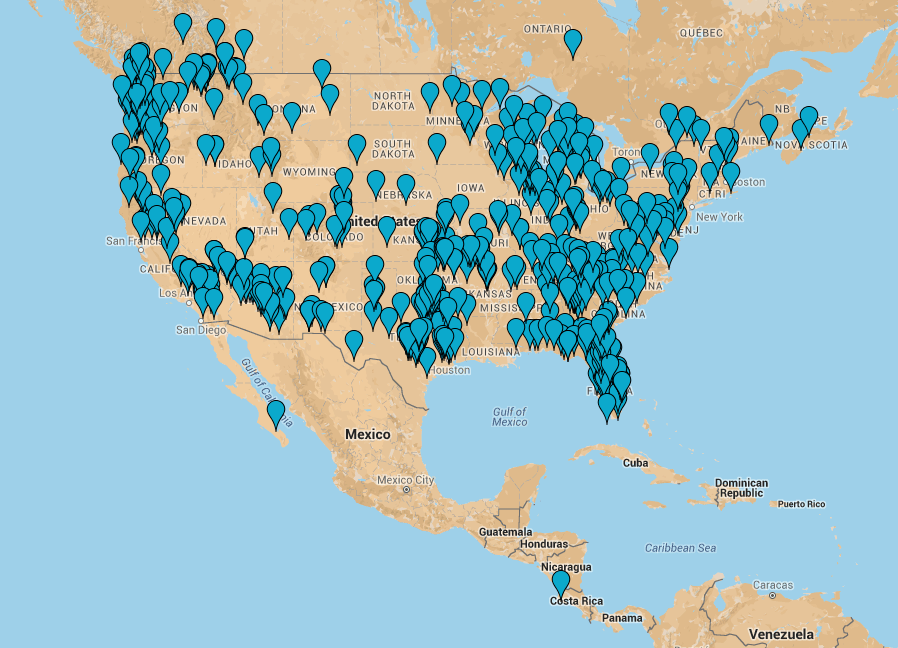 Airparks still maintain their appeal, and there aren't any indications that the trend is going to take a nose dive any time soon.

There are all kinds of benefits living within a fly-in community. Individuals with a passion for aviation can live among like-minded individuals; pilots can have convenient and around-the-clock access to their planes; individuals who like their privacy can seek solace in these private communities.

While the benefits seem endless, moving into a gated community such as these requires research, of course. Those who prefer to not keep company with their neighbors might not like Spruce Creek's open hangar policy, for example. Or individuals who consider themselves to be non-conforming wouldn't take too well to Jumbolair's very specific building requirements (Jumbolair is also located in Florida and is where John Travolta currently owns property, according to the internet).

Dogs may be considered man's best friend, but as far as I know, there aren't 600+ communities being built around them across the globe.