On September 19, 1783, a duck, a sheep, and a rooster all made history as the first passengers to ever travel through the air in a balloon. While their names didn't go down in the history books, the names of the balloon's inventors certainly did.


Beginning in France during the late 18th century, the public developed a strong interest in hot air balloons and balloon flight. Such interest really took off when two brothers publicly displayed their balloon work in 1783. 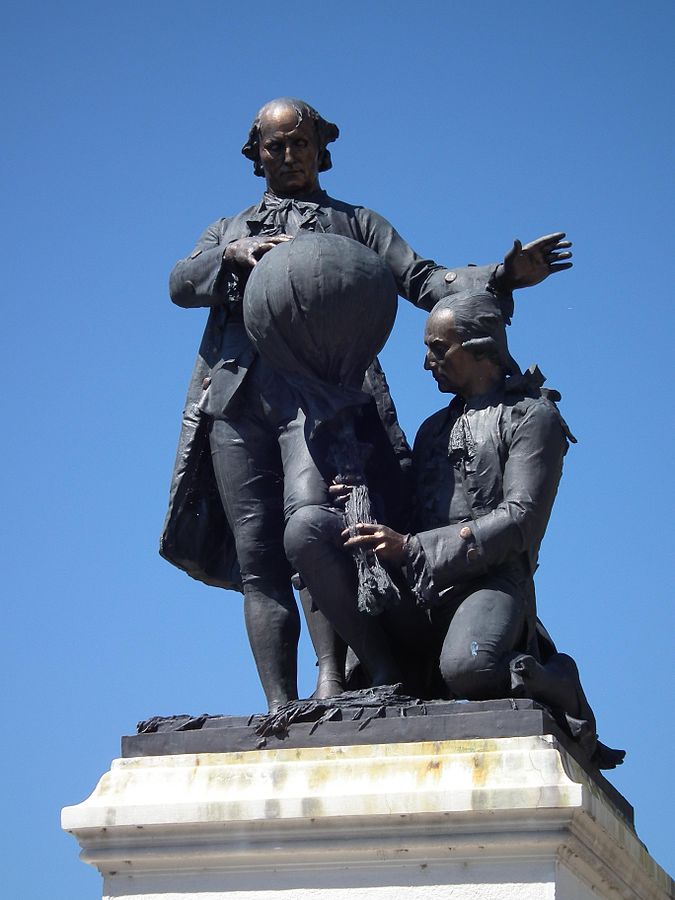 Joseph and Etienne Montgolfier were two of the 16 children of Pierre Montgolfier and Anne Duret. The family had a very successful paper business and owned prosperous paper factories in France. The family business, which they ran after the sudden death of their elder brother Raymond, provided them both with financial support and freedom to pursue their eventual interest in balloons.

Joseph always had more trouble focusing on one aspect of things, which is why he left school to form his own chemical business in Paris. When he started to actively run his father's business, he focused on Innovating. Etienne, on the other hand, was much savvier with business matters. He had studied architecture at school and also had an interest in science.

The initial start of the Montgolfier brothers' interest in ballooning remains a mystery. But we do know that in 1782, they discovered that when heated air is contained in a lightweight vessel (such as paper or fabric), that vessel rises. Initially, they thought there was a new gas causing this (they were ready to call it Montgolfier Gas), but in reality, it was just the act of the hot air rising (you know, air density and whatnot).

The Roots of Balloonomania

Joseph and Etienne weren't the first or only individuals to be studying lighter-than-air flight. Bartolomeu de Gusmão, for example, was a Portuguese priest and naturalist who sought royal favor for his airship invention in 1709. His ideas and experiments floating small balloons were further developments of Francesco Lana de Terzi's ideas (who we talk about briefly in our post on prolific early flying machine inventors). 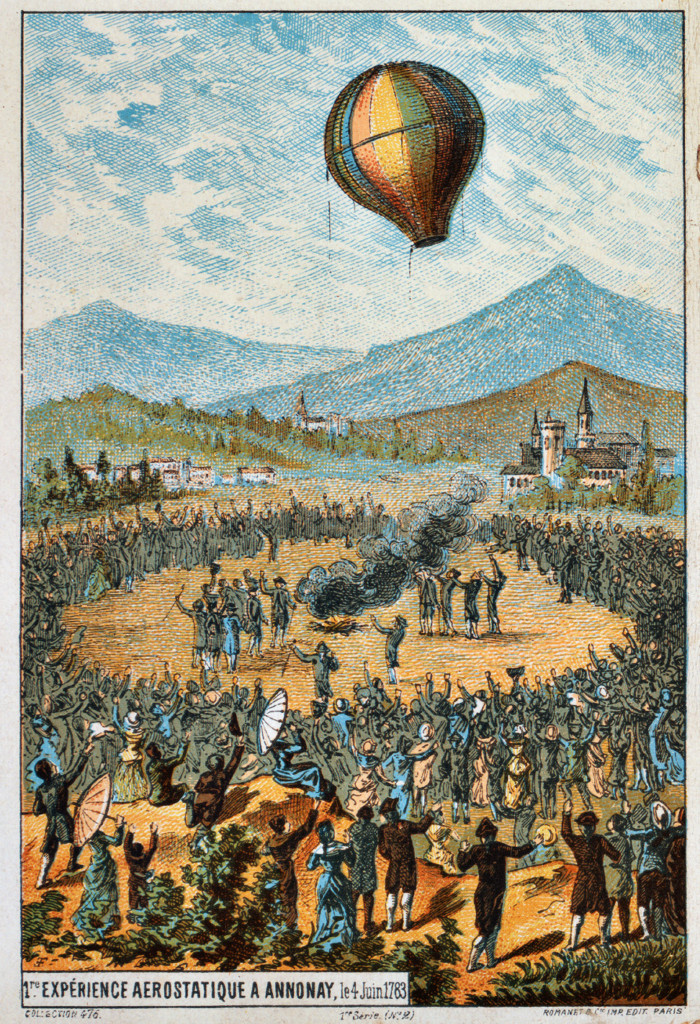 Good timing played a major part in what established the Montgolfier brothers as pioneers of untethered balloon flight. They were two of many working towards manned flight and managed to get themselves ahead-with an audience.

In April 1783, the brothers began testing their theories with various models of potential balloons and materials. They also conducted experiments with different flammable media to see what burned better. They found that a mixture of straw and wool burned sufficiently.

On June 4, 1783, they presented their work publicly for the first time. At their demonstration held the marketplace in Annonay, the brothers launched a paper-lined silk balloon-with no passengers aboard. The balloon reached an altitude of around 3,000 feet and stayed aloft for about ten minutes, traveling a distance of about 1.5 miles.

After completing this successful demonstration, word of their success spread and they prepared for another test. This time, however, they wanted a more structured balloon that could carry passengers. They also wanted the favor of the King, so they planned for a demonstration with King Louis XVI and Marie Antoinette present.

A successful wallpaper manufacturer named Jean-Baptiste Rveillion helped the brothers construct a balloon 30-feet in diameter made of taffeta and coated with alum for fireproofing. The balloon was decorated with golden decorations, including zodiac signs and suns symbolizing King Louis XVI).

At this time, the effects of high altitude on people and other living things were unknown. For the first travelers aboard the balloon, the King initially proposed the use of prisoners. The Montgolfiers, however, chose to go a different route. They suspended a basket below the balloon and in that basket was a duck, a sheep, and a rooster.

There was actually some science behind their choices. The duck was a type of -control- element since ducks are natural fliers. The rooster was another element of control because as a bird he could fly, although normally only close to the ground. The sheep was a stand-in for a human being since they believed that physiologically, a sheep was similar to a human.

The flight occurred on September 19, 1783, in front of 130,000 people, including the King and Queen. The flight lasted about eight minutes and landed safely after drifting for about two miles.

While animals are all well and good, the real goal was to get mankind flying up in the air. 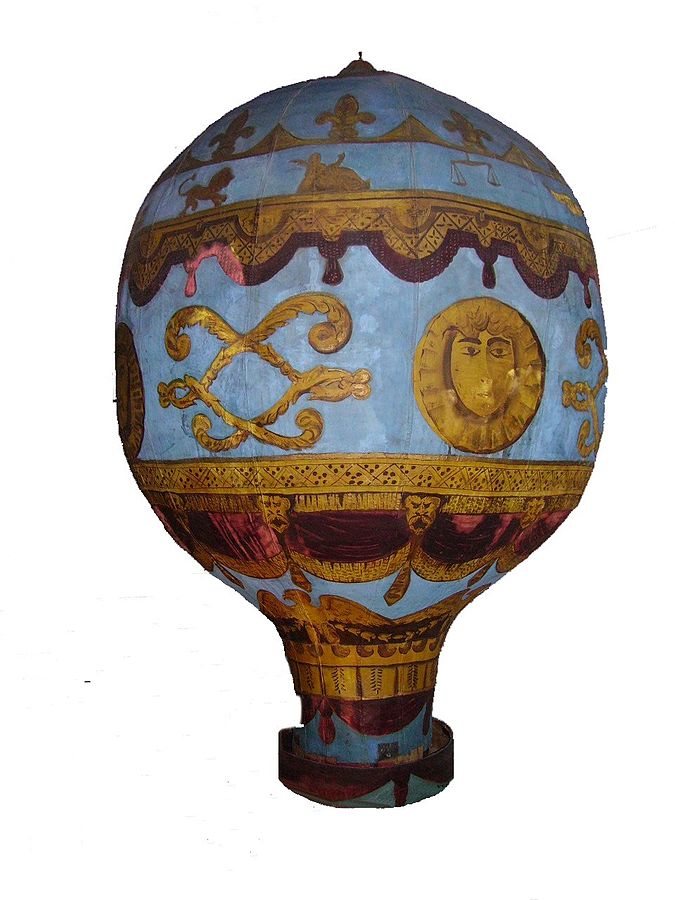 On October 15, 1783, a chemistry and physics teacher named Jean-François Pilâtre de Rozier went up in a tethered flight. He stayed aloft for about four minutes.

The next month, on November 21, 1783, two men made the first free ascent in a balloon. This time, Pilâtre de Rozier was accompanied by the Marquis d'Arlandes, a French military officer. The 25-minute flight took them about 5.5 miles. Many witnesses were in attendance, including Benjamin Franklin.

Ultimately, the goal was to eventually carry larger groups in these balloons. On January 19, 1784, a large, 130-foot diameter balloon launched from Lyons, France. Seven passengers flew as high as 3,000 feet for a 15-minute flight.

The Montgolfiers encountered some problems (and limitations) with ballooning. For one, they needed to figure out how to steer. At this point, the balloons and passengers were at the mercy of the air. They also realized that altitude and distance were further limited to air cooling.

Still, their success sparked a sensation in France that traveled globally. Balloon motifs popped up everywhere from clothing to chairs and crockery and clocks. The events were commemorated with engravings and illustrations and even some hairstyles were inspired by ballooning.

Many advancements occurred after the Montgolfiers' success which helped establish balloon flight in aviation history. In the years that followed, the sky was the limit for budding aeronauts. Following the first manned flight, other milestones include the first across the English Channel (1785), first flight in North America (1793), first use in war (1793-1945), and beyond. You can read more about how early military observational balloons were used in wars here.