Two years before WWII ended, the military re-purposed the PB4Y-1 Liberator into a Navy PB4Y-2. The U.S. Army Air Corp originally designed the plane for their use; however, the plane did so well in maritime patrol that engineers transformed it into a long-range patrol bomber.

Naval officers initially called the plane the Sea Liberator, but dropped it for the Privateer instead.

The one-of-a-kind Privateer entered Navy service in late 1944. The Navy's need for a long-range land-based aircraft for patrols against enemy ships and submarines resulted in this modified version suited for recon missions across the Pacific.

Three B-24 Liberators were taken off of the production line and transformed into Privateers. Engineers altered the B-24 to have a single vertical fin and replaced the nose turret. The fuel fuselage was lengthened to 74 feet, 7 inches-- nearly 10 and a half feet longer than its original form. Extra space was used for new electronics and a flight engineer's station.

Privateers towered a hangar-roof at over 29 feet off of the floor. The 110-foot long Twin Spar Davis High Lift wing paired with massive Fowler flaps made the Privateer daunting. These two features contributed to making long-range missions for the high-speed machine possible. The Privateer was a favorite on the squadron service, even after the rival Boeing B-17 retired. Pratt & Whitney R-1830 Twin Wasp engines gave the Privateer flight. 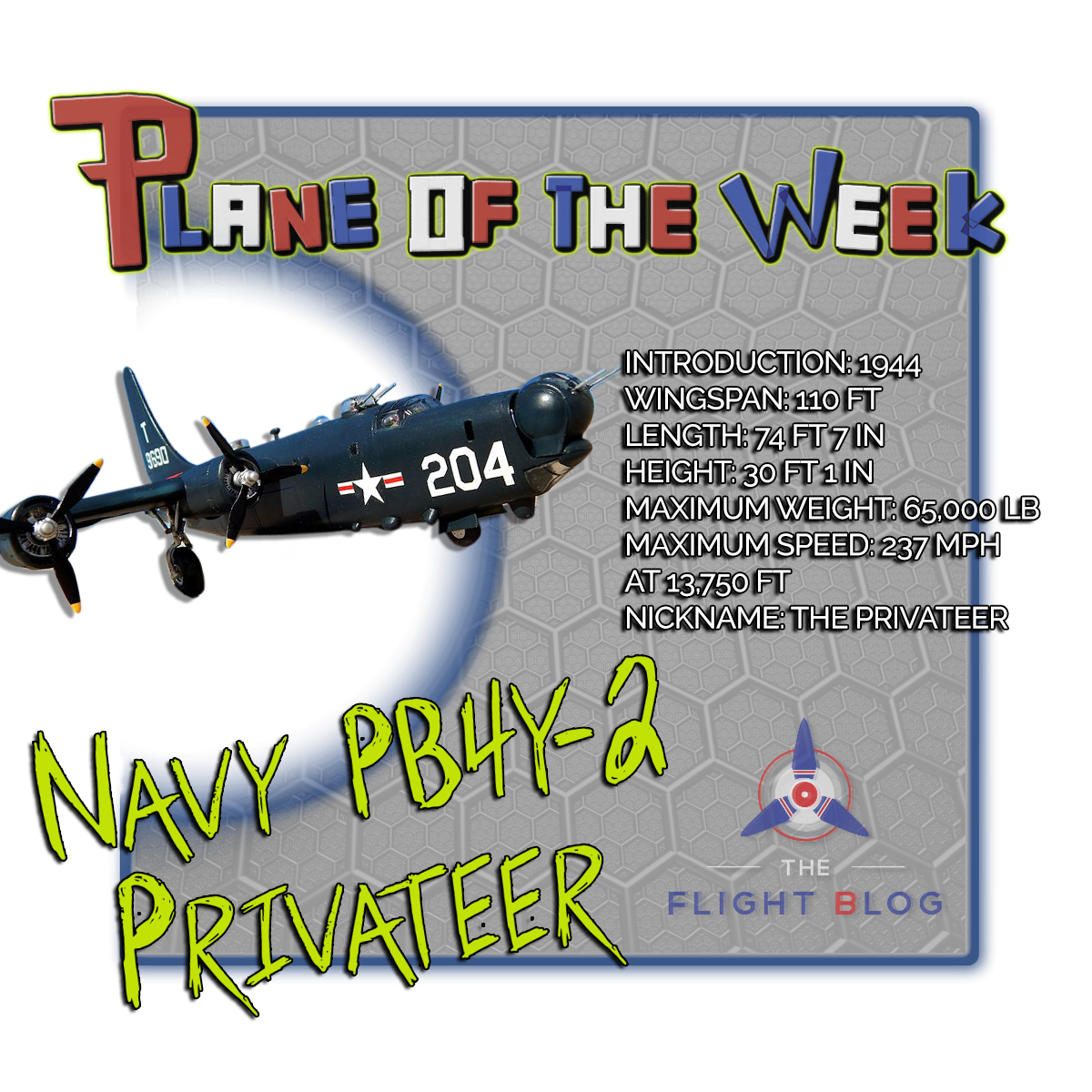 
Electronically, the Privateer was highly-equipped and could be customized. Such a versatile plane functioned as an airborne communication platform, radar and radio station hunter, weather recon, ship search and destroy units, and rescue unit to find downed airmen radio direction finders. The plane could even be its own standoff anti-radar jamming unit.

The Privateer's flexibility made it practical and able to target enemies effectively. It could clear the sea from enemy transport, radar, radio navigation aids, and scouting vessels. It could also destroy submarines, augment communications, and gather weather data for a 1300 mile radius around the Privateer's base. No other aircraft was as resourceful as the Privateer at this time.

In October 1945, the last Privateer was delivered. Consolidated Aircraft manufactured a total of 739 Privateers, and one is still in flying condition today.

The United States was not the only nation interested in maneuvering the plane. Korean forces used the Privateer in 1950 to fly dangerous nighttime  Firefly missions where parachute flares were dropped giving the Privateer another nickname of "Lamp Lighter."

The Aeronautique Navale requested 22 Privateers for the French colonial forces in Vietnam. The aircraft functioned as bombers until after Dien Bien Phu, a battle occurring in the First Indochina War. Four Privateers were destroyed, six were returned to the U.S., and the remaining 12 were flown to Africa. The planes fought in Algeria and then participated in the Suez Incident. Lockheed P2V Neptunes eventually replaced the Privateer.


Privateers were also utilized in Reserve Squadrons by helping to keep up training for thousands of Naval Reservists.

The official end of the Privateers military career was marked when one was shot down by a Bullpup missile off Point Magu, California.

Life After the Military

After the Privateer retired from military use, it took on other roles. Some Privateers were used as anti-forest fire water bombers. The nose turret was removed and rebuilt with an observation dome. Engineers removed the side turret and installed dome water tanks as well. The planes were given new engines and the planes were then named Super Privateers.

The Super Privateer became a hurricane hunter by joining forces that fly into cyclones in the North Atlantic and Northeastern Pacific Ocean.

In April 2016, the last flying Privateer was in the Coachella Valley at the Palm Springs Air Museum for a week. It was then delivered to Chino for the Chino Air Show in early May. The device is among 50 vintage aircraft on display for the Planes of Fame 2016 at the Yanks Air Museum.

The Privateer is officially retired from civil service but continues to tell an interesting and compelling story.