On November 8, 1957, a Boeing 377 Stratocruiser left San Francisco International Airport at 11:51 am (PST) for Honolulu, Territory of Hawaii. It was a Friday and, for many people, it was probably a rather ordinary day.

Pan Am Flight 7, registration N90944, Clipper Romance of The Skies was an around-the-world flight; its first leg of the journey, which included many planned stops, was from California to Hawaii. Ultimately it was scheduled to arrive in Philadelphia, Pennsylvania, but Romance of The Skies never even made it to Hawaii.

For the 36 passengers and 8 crew members aboard Pan Am ship #944, the trip started and ended in San Francisco. Somewhere beneath the Pacific Ocean waves, maybe a couple thousand miles west of the Golden Gate Bridge and 15,000 deep below the horizon, lies the metal skeletal remains of that B-377. And with it perhaps some answers to this nearly 60-year-old aviation mystery.

Somehow a big, 4-engine long-range airliner-with 44 people on board-simply vanished from the skies.

When Amelia Earhart disappeared twenty years prior, it sparked a massive search effort; with the disappearance of Romance of the Skies, it launched the largest air-sea search since Earhart. After 6 days, U.S. Navy aircraft carrier USS Philippine Sea found bodies and some floating wreckage almost 1,000 miles northeast of Honolulu-and 90 miles north of the aircraft's intended track:

Fifteen bodies, most of them with life jackets from the lost airliner, 'Romance of the Skies,' were picked up today in the Pacific Ocean 955 miles northeast of Honolulu. The aircraft carrier Philippine Sea reported that the recoveries had been made in a 33-square-mile area of scattered debris. All of the bodies were shoeless and had external injuries and multiple fractures, the carrier's report said. The Philippine Sea said she had a flotilla of small boats recovering and delivering bodies and bits of debris to her decks.

Watches found on three victims' bodies had stopped at 4:26 p.m., giving researchers and authorities the time that Pan Am Flight 7 crashed into the water. Toxicology results showed that four of the individuals had higher-than-normal levels of carbon monoxide in their bloodstream.

This would prove to be all that was recovered from the aircraft's mysterious crash. 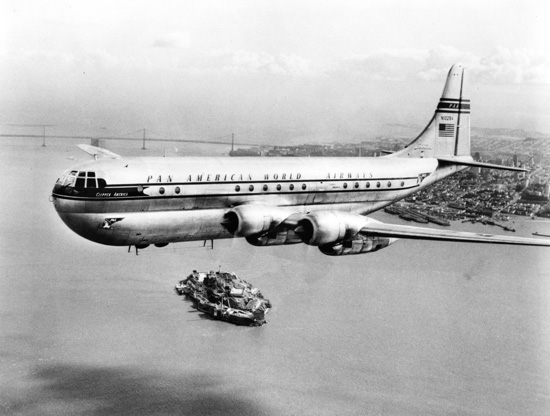 Pan Am Flight 7's disappearance from the sky proved to be anomalous, at least to the Civil Aeronautics Board crash investigators (and the numerous investigators that have looked into the case over the course of 60 years). Such anomalies include: a lack of decipherable distress call received from the aircraft; debris location showed that Romance was well off course and headed away from a Coast Guard ship that could have helped; and finally, the elevated levels of carbon monoxide were found in some of the recovered bodies.

Authorities' inquiries implicated 3 separate suspects in the aircraft crash; however, in January 1959, the Civil Aeronautics Board found -no probable cause- for the crash and formally closed their inquiry. Informally, individuals such as Gregg Herken and Ken Fortenberry have "reopened" the case.

Most of the bodies found among the wreckage died of drowning. And though the wreckage had burn marks, they were all above the waterline, indicating the fire was post-crash. Both Pan Am and the FBI suspected foul play.

During the course of Herken and Fortenberry's investigation, they discovered that back in 1957, Pan Am suspected that one of their own might be involved.

Eugene Crosthwaite (the flight purser on 944) had previously been in trouble with Pam Am for questionable behavior. He also held onto resentment with Pan Am for an incident in which he contracted tuberculosis in Shanghai while serving as a purser on Pan Am flying boats.

Crosthwaite's wife had also died 3 months before the crash, leading to further despondency, and his relation to his stepdaughter, Tania, were reportedly stormy. Less than a week before the flight, Crosthwaite called the county Sheriff's office and blamed his wife's death on Tania. The morning of the flight, he changed his will and disinherited her unless she "lived a moral and upright Catholic life." A copy of the will was found in his car's glove box in the airport.

What seemed to make the case against Crosthwaite even stronger was his father-in-law's claim that he had seen Crosthwaite with blasting powder just days before the flight. No one could find the explosives on Crosthwaite's property after the crash.

But before Pan Am could conclude their investigation with their blame on Crosthwaite, a new suspect entered the case 10 months after the tragedy.

William Harrison Payne was one of the passengers listed on Flight 7. Owner of the Roxbury hunting lodge outside of Scotts Bar, California, he was supposedly flying to Hawaii to collect an overdue debt. However, suspiciously enough, the cost of his one-way ticket to Honolulu was greater than the debt he was collecting. Even more suspicious was that Payne-whose body was never found-had taken out 3 life insurance policies on himself not long before the accident; one of the policies paid out double in the case of accidental death. To further add to the plot, Payne had previously been a demolitions expert. Suspicious?

Payne's story-and status as potential suspect-came about due to an investigation of Western Life Insurance Company. Russell Stiles, the investigator, was convinced Payne had brought the aircraft down to collect the insurance money, and he had never been on the plane to begin with. His potential motive? Reportedly Payne owed his mother $10,000 for the lodge, which was losing money and was up for sale.

In June 1958, only seven months after the crash, the (heavily insured) Roxbury Lodge burned down while Harriet Payne (William Harrison Payne's wife) was in Mexico on her honeymoon (having just married a friend and former neighbor of William's). Reportedly Harriet and her new husband received several mysterious packages and letters from oversees without a return address.

But even with these two possible (and highly suspicious) suspects, some on the Civil Aeronautics Board had yet another suspect.

Boeing 377s were not without their problems; in fact, they had a history of problems, specifically with propellers. Initially, Pan Am Stratocruisers had 7-foot-long Hamilton-Standard Hydromatic propellers with hollow-core steel blades. Due to centrifugal forces, sometimes the neoprene within the cores would get pushed to the tips of the blades and create an imbalance. A few times pieces of blades actually flew off. But hollow-core propellers weren't the only problem: there was also an issue with -over-speeding- props.

A brazed oil transfer tube in the engine nose was possibly another fatal flaw in the 377. The FAA issued an airworthiness directive (AD) in early 1957 to address this flaw. They warned, "As a result of propeller shaft oil transfer bearing failures, several cases of loss of propeller control occurred which make it impossible to feather the affected propellers." The AD ordered engine inspection and the replacement or repair no later than May 31, 1957: 6 months before the crash. Could the oil transfer bearing not have been fixed before Pan Am Flight 7 took to the skies on November 8, 1957?

Though it has been nearly 60 years since the mysterious crash of Pan Am Flight 7, no definitive cause has ever been determined.