Do you think of bananas?

Do you think of flying?

But there are doses of radiation thanks to all manners (and nanners) of life. But in most instances, these doses are so small and so infrequent as to not cause much harm to the human body. Spoiler alert: flying has more radiation exposure than a banana.

Is it wrong to picture Neil Degrasse Tyson wielding a futuristic, sci-fi laser gun while wearing a pair of polarized Wayfarers?

According to NASA, cosmic rays are -high-speed atomic nuclei with a wide range of energy- produced by -a variety of violent events in space.- These charged particles are emitted by stars (like our sun).

These subatomic particles constantly bombard Earth. Those that make it through Earth's atmosphere and magnetic field pass through us and deliver tiny amounts of radiation. Under normal circumstances, it's really nothing to be concerned with (one of the side effects of living on a planet in outer space, I guess).

When you get on an airplane and fly at higher altitudes, though, you're getting a little bit more from space. At higher altitudes, the air is thinner. The farther you travel from Earth's surface, the fewer molecule of gas there are. Thinner air with fewer molecules means less deflection of those cosmic rays. Less atmospheric shielding means more exposure to radiation from outer space.

Again, for the average individual, this isn't really something you even need to think about. The people who might need to be a little more aware of their radiation doses are those in the air frequently: both frequent flier passengers and flight crew. Or if you're an astronaut. Astronauts who travel out of this world have no protective atmospheric shielding. That's at least one of the reasons for maximum limits for manned space flights: radiation exposure.

How Much is Too Much?

Exceeding the recommended limits of the average joe traveler would be very uncommon. 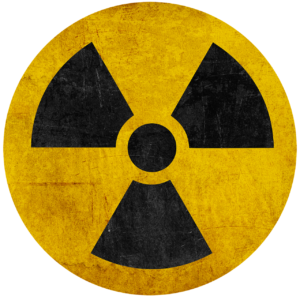 Dosage and dose rate (exposure time) are both when calculating radiation risk. A dose is measured in Sieverts (Sv), millisieverts (mSv), or microsieverts (µSv).


Were you to book a flight from New York City to Los Angeles, we could calculate the predicted radiation dosage. At the airport, the security scan can range anywhere from 0.1 to 0.25 µSv (the maximum permitted). Let's assume the maximum here. The flight itself would equate to approximately a day's exposure to about 40 µSv, assuming typical space weather. With just those two combined factors, that's around 40.25 µSv of radiation.

So, how does that compare?

The US government's yearly limit of artificial radiation exposure to the public is around 1,000 µSv (or 1 mSv). If long, cross-country flights aren't a weekly thing for you, you should be ok-there's much more radiation in a spinal X-ray and/or smoking a pack of cigarettes a day for a year. Besides the banana you just ate, your yearly food intake will expose you to about 100 µSv radiation.

To compare radiation dosages, check out the Radiation Dosage Chart on Information is Beautiful.


Now, those recommendations are just for your typical American citizen. For radiation workers in the US, the government permits a maximum of 50,000 µSv (50 mSV) per year. The International Commission on Radiological Protection (ICRP) recommends an effective dose limit of 20 mSv /year averaged over the course of 5 years (totally 100 mSv in 5 years).

According to NASA, commercial aircrews receive the highest radiation levels of any occupationally exposed group, yet they do not quantify the radiation they're exposed to. Polar routes in particular significantly increase exposure to cosmic radiation because that's where radiation has an opening in the planet's atmosphere.

What Can You Do About It?

Currently, flight crew members can't do too much to limit their occupational exposure to radiation besides avoiding polar flights and limiting the amount of long flights they work (or finding a job on the ground). In Europe, female staffers are encouraged to report pregnancies early so as not to adversely affect reproductive health. Maximum radiation doses are significantly lower for a pregnant radiation worker (about 1 mSv throughout pregnancy).

NASA is continuing to study high-altitude radiation to get more precise information on exposure and to improve real-time monitoring for anyone who flies-both passengers and crew. On September 25, 2015, NASA successfully launched their Radiation Dosimetry Experiment (RaD-X) high-altitude balloon in New Mexico. Hopefully, NASA's research will improve real-time cosmic radiation monitoring for the aviation field and help create the most efficient safety guidelines for flight crews, the general public, and commercial space operations.