GEICO may be known for their humorous car insurance commercials with the iconic GEICO Gecko, so you might be surprised to learn that they also sponsor an air show team. The GEICO Skytypers is a flight squadron consisting of six vintage WWII aircraft. The team includes nine pilots, and each pilot brings diverse flying experience. After performing the demonstration portion of their routine, they type messages into the sky. Their airshow schedule varies every year, but Sun n’ Fun marked their 2019 season opener. 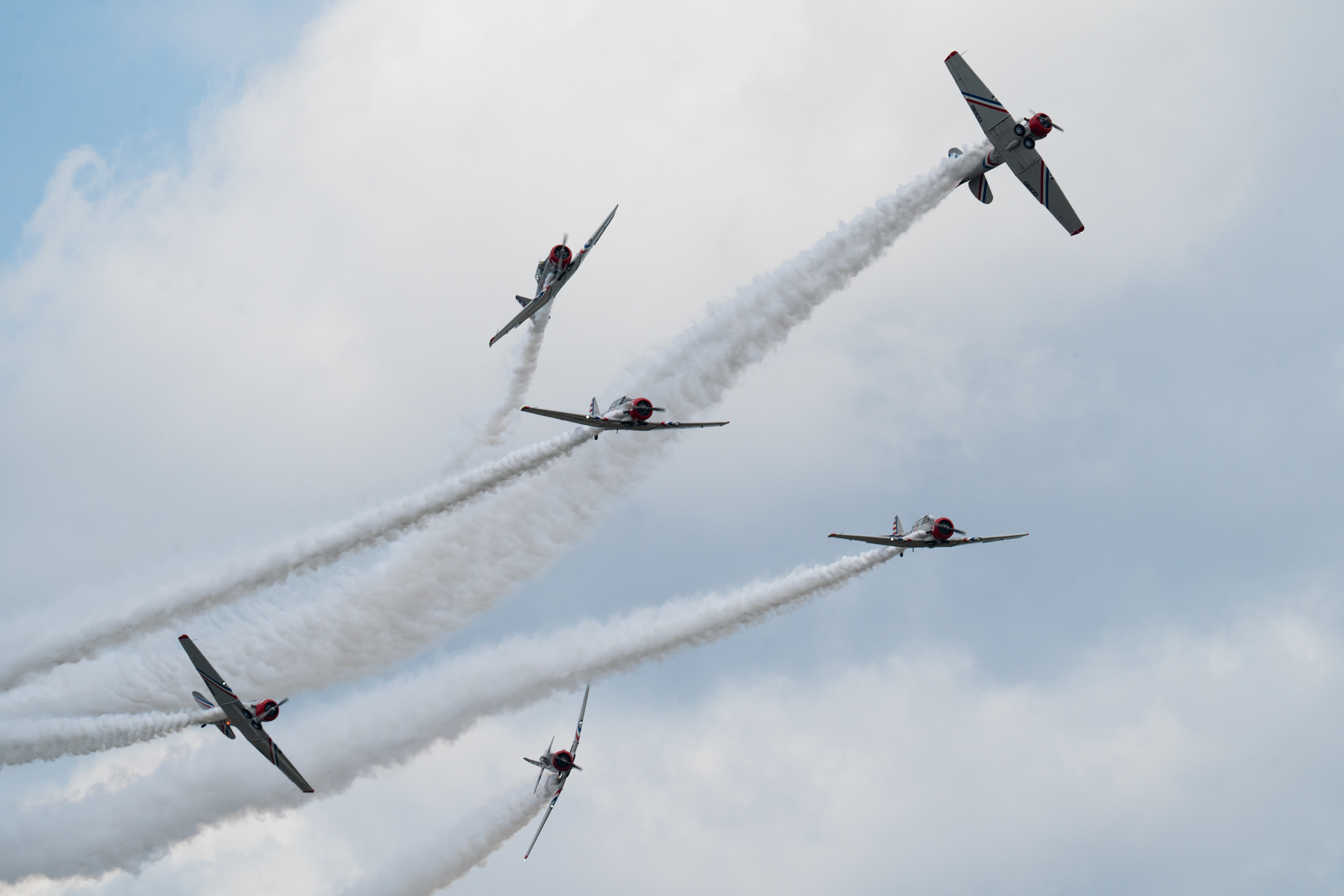 While skywriting and skytyping share the art form of creating messages in the sky, they vary on how they do it. Skywriting is performed by a single plane where the pilot writes up to 6 letters using a stream of white smoke to create a message. Skywriting relies on the skills of a pilot to maneuver the plane to determine when to create the smoke lettering.

Skytyping, on the other hand, involved emitting smoke in a series of bursts, rather than a constant stream. A computer produces the layout, and electric signals control the smoke output. Think of it as the difference between drawing a line versus making dots on a sheet of paper.

How They Perform the Dangerous Stunts

The team begins with a morning brief to outline activities and set timelines for the day ahead. The pilots always know what to expect before ever taking off. The flight leader, currently Larry Arken, provides all navigation, radio transmissions, and tactical decisions to his wingmen. The wingmen have the responsibility of position keeping or maintaining their position with consistency.

Whenever a pilot moves from his position, it is considered a movement. The leader is the only one who speaks on the radio to alert his men of various information including formation positions, split-ups and rejoins. After each flight, the team conducts a debrief to ensure the best performance and safety.

The Dangers of Formation Flying

If you are unfamiliar with the difficulties of flight, you might think it’s easier to fly closer to the ground as opposed to higher elevations. This is not the case.

Firstly, if an aircraft loses power, a pilot has less time to perform a forced landing and has fewer options for a landing site. It is also harder to look out far ahead, so there’s a greater risk of colliding with obstacles. It’s safe to say that the lower the pilots fly, the more experienced and disciplined they must be. Don’t expect a rookie to join an airshow anytime soon.

The GEICO Skytypers perform a low-level precision-flying demonstration that lasts 18 minutes. This type of formation flying is incredibly dangerous considering the aircraft fly feet from each other in complete harmony. The leader commands the squadron, and all wingman are expected to remain at a constant distance from the leader. If one pilot makes a mistake, the safety of the entire squadron is jeopardized.

Weather is another key element that is taken into consideration before the flight. The GEICO Skytypers are more vulnerable than other performers. Although they have similar parts of their routine to others, their skytyping requires near-perfect visibility. Clear skies are needed for skytyping; therefore, clouds ruin the fun event.

White smoke is used during the airshow which makes it visually appealing to the crowds and safer for the pilots. The smoke creates better visibility of aircraft trajectories. To learn how smoke oil works, check out our blog post on the topic.

Need oil for your own airshow or personal smoke oil system? BlueSky Lubricant’s White Lightning smoke oil is our favorite! It has no additives, meaning it burns clean and won’t harm the environment (or your plane’s paint job). This hydro-treated, low viscosity paraffinic oil creates a bright white trail perfect for your aviation aerobatic displays.