When aircraft crash or disappear, investigators highly prioritize retrieving the aircraft's black box. The device records the entire flight, as well as conversations in the cockpit and between the flight crew.

However, the term -black box- inaccurately describes the box. It is a bright orange cylinder that must be highly visible in a wreck.

The Flight Data Recorder (FDR) and the Cockpit Voice Recorder (CVR) are attached. The FDR records parameters and data related to the flight and operation of the plane. It must store a minimum of 25 hours of flight information.  On the other hand, the CVR records voices, engine noise, and any other sounds in the cockpit; at least two hours of audio is required.

Black boxes collect a magnitude of information because crash experts rely on the data to investigate what may have caused a crash and identify any engine and maintenance issues.

The Federal Aviation Administration requires all commercial aircraft to carry one. Smaller commercial, private, and corporate aircraft must also install one or both boxes on the plane. Each box costs between $10,000 and $15,000. 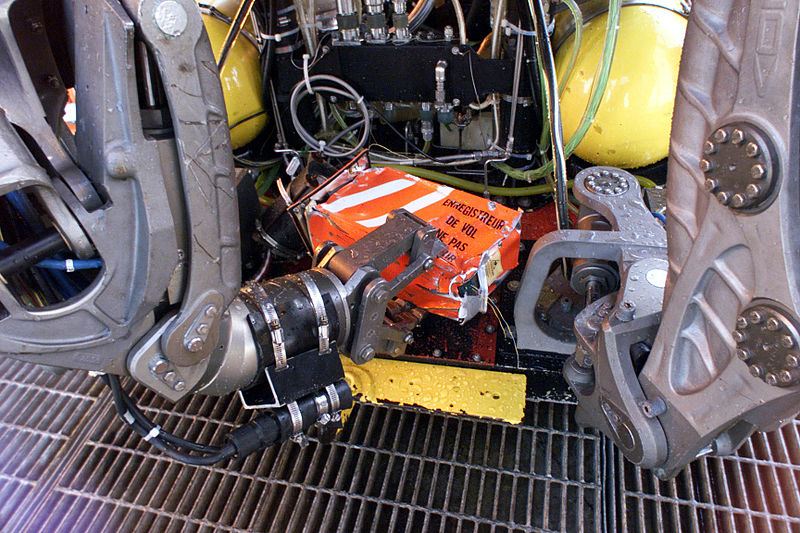 A black box's ability to survive in the most extreme circumstances is key. The first black box was developed and used in the 1950s, and by the 1960s it was mandatory on certain flights. It functioned like a tape recorder and used magnetic tape for data storage.

Modern recorders use solid-state memory boards known as Crash Survivable Memory Boards (CSMB). Experts prefer these solid-state recording devices because they have a higher chance of surviving a crash. Moreover, they resist damage from shock, vibration, and moisture.

A thin layer of aluminum and a 1-inch layer of high-temperature insulation surrounds the black box. A corrosion-resistant stainless steel or titanium shell encases the memory boards.

The device must be able to endure 3,400 Gs and an impact velocity of around 310 mph. In addition, it must survive up to 2,000°F for one hour. The beacon needs to also successfully send a signal once per second for 30 days while submerged in 20,000 feet of water.

As we learned through media coverage of crashed or disappeared aircraft, finding the black box can be extremely difficult.

Search teams must be within approximately 15 miles of the beacon because it allows them to locate the signal. Finding the box in ocean crashes relies on finding debris as quickly as possible and close to where the impact occurred. The more time that passes, the higher chance there is for debris to get swept away from the crash site in currents and tides.