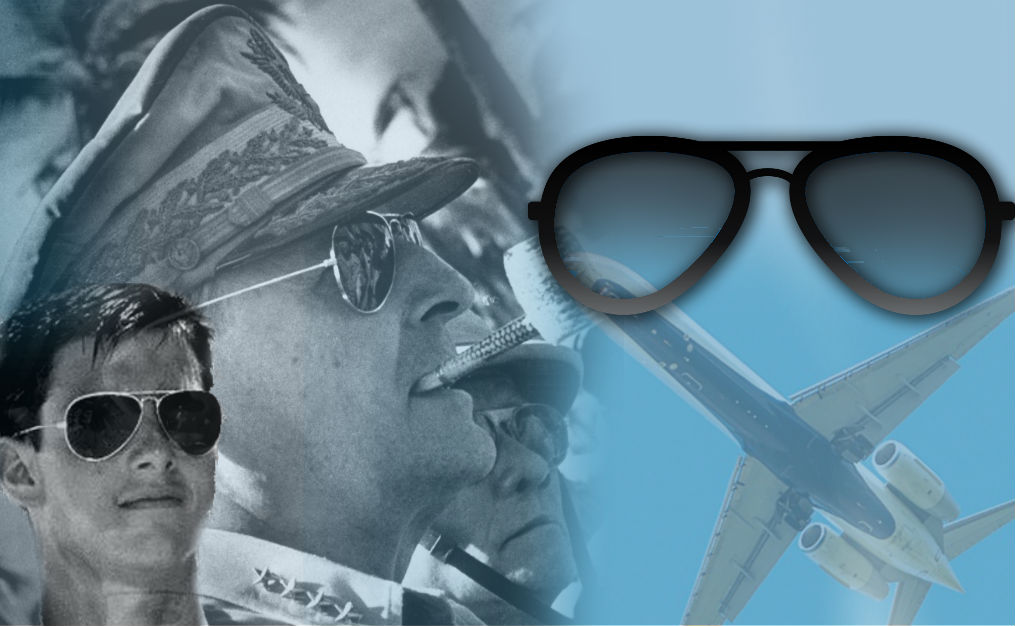 Tom Cruise may be pushing the boundaries of insanity by many of our standards, but-dear lord-was there ever a face so exquisitely shaped for a pair of aviator sunglasses?

As you can see, Cruise is obscenely photogenic-as is his right-hand-iceman, Val Kilmer-in 1986's Top Gun. While the late Tony Scott's direction contributed a great deal to showcasing their "good sides," one would be remiss to deny the sheer aesthetic value of a slow-motion Tom Cruise in a bomber jacket and bug-eyed sunglasses, indiscriminately basking in (but outshining) the San Diego sunset.

Still, you may be surprised to learn that after the release of Top Gun, not only had Ray-Ban Aviator sales risen by 40%, but the US Navy had documented that their recruiting offices saw an increase of up to 500% in potential Aviator candidates. Let it be said-whatever your sentiments are in regards to Tom Cruise, you simply can't deny his influence.

While thirty years have passed since the original Top Gun's release, aviator sunglasses-much like the undying fame and non-wrinkling face of Tom Cruise-have remained far beyond relevant, even elevated to legendary status after existing so long in the limelight.

As it turns out, ever since General MacArthur was photographed during World War II with a corncob pipe and a stylish pair of aviators, the unique style has endured through several extremely difficult periods for both men's and women's fashion. Aviators withstood the fierce blow of optometrists in the 1970s ( clear lenses on aviators make little sense when considering the original design), outclassed the shoulder-padded suit of the 80s, and surmounted the impossibly-high perm/mullet of the early 90s; somehow, the aviator has always been cool.

Aviators were always explicitly intended to be used by pilots, but were quickly adopted by the military, at large. The large surface area of the lens as well as the slightly-curved design contribute to the efficiency of these glasses to block out sunlight from any angle. That was the intention in 1936, when they were first designed-block out the sun and nothing more.

Thankfully for the likes of Tom Cruise, the popularity of the glasses among the military ranks lasted long enough for Top Gun to be produced, distributed, and re-watched thousands of times. While the original inventor and General MacArthur deserve some kudos for unintentionally extending the trend of aviators onto the lap of some money-grubbing studio head, there is no single man or woman more responsible for extending this revolutionary fashion trend into the 21st century than Tom Cruise.