We are incredibly lucky to presently live in a world with advanced medical technology. It wasn't all that long ago, really, when commonplace surgeries today would have been nothing more than a pipe dream.

World War II changed the world in many ways. During this time, aircraft advanced, weapons advanced, and numerous technologies advanced-because they had too. But as these aircraft and weapons further developed and increased in numbers, so, too, did the human casualties. And medicine had to catch up.

Prior to the Second World War, severe burns weren't much of an issue. They were rare. Household accidents were the most common cause of human burns. But then you had the fighter aircraft, planes like Spitfires and Hurricanes that were not only full of highly flammable fuel but were also prone to accidents. When one of these planes crashed, for instance when shot down by the enemy, that highly flammable fuel would spill out over pilots and crew and it would burn. And it would burn hot. It caused severe damage.

RAF pilots who survived their crashes would find themselves in a tough position. Hundreds of otherwise young and healthy men had severe burns all over their bodies. Many were left disfigured from their accidents. At another time, and perhaps in another place, these men might not have survived. Or, if they had, they would have been institutionalized away from other members of society. Because at one time, that's what you did, all in the name of protecting these victims from the public.

At least, that was the norm before Dr. McIndoe.

Dr. Archibald McIndoe was a New Zealand plastic surgeon who, during WWII, worked for the Royal Air Force (RAF). In September 1939, Dr. McIndoe arrived in East Grinstead to the Queen Victoria Hospital. His arrival would completely reshape the lives of hundreds of men, the history of East Grinstead, and the very course of plastic surgery.

When McIndoe arrived at the Queen Victoria Hospital and eventually took charge of it, his skills were in dire need. By the late 1930s, the British government was trying to figure out what to do with the increasing casualties from the war. They were especially concerned with the number of severely burned airmen and casualties from air raids.

The Queen Victoria Hospital became one of four specialist centers to deal with such casualties. Three new wards were also built here. Ward I was for dental and jaw injuries. Ward II was for women and children. These were mostly air raid casualties or those with inherited conditions that exceeded the capacity of London hospitals. The to-be-famous Ward III was for officers and the most severely burned and injured service personnel.

Archibald McIndoe and his patients were extraordinarily different. 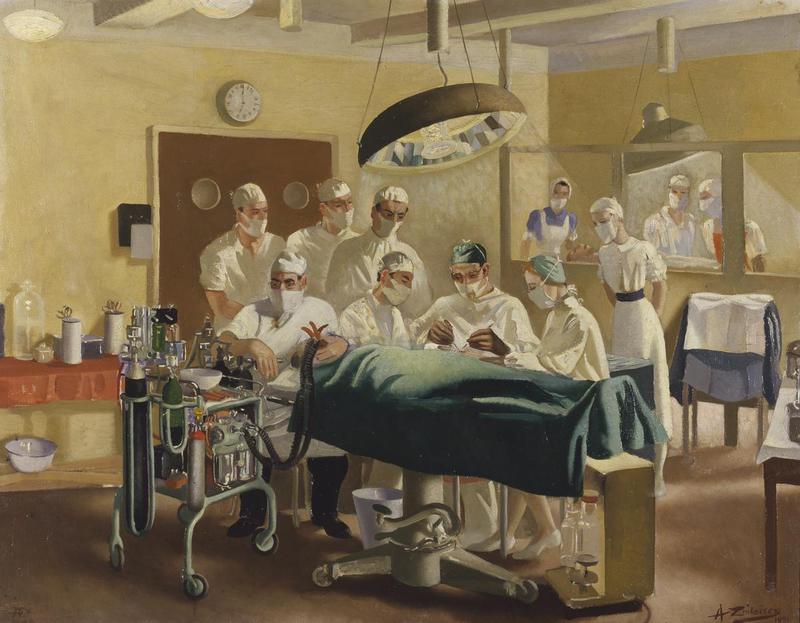 Ward III became famous not only for Dr. McIndoe's incredible feats in reconstructive surgery but also the antics of the resident airmen.

McIndoe matured Gillies' technique of -waltzing- skin to heal burn victims. This technique involves walking a tube of skin end-over-end from one body part to another. Dr. McIndoe managed to address larger areas of burn injury than ever before by walking the skin up from distant uninjured sites. He performed the walking-stalk skin graft to keep the skin alive and healthy for grafting onto areas such as the face.

McIndoe also discovered that immersion in saline promotes healing and improves survival rates for victims with extensive burns. He drew this conclusion after observing the differential healing rates in pilots who had crashed on land and who had crashed into the sea.

Since McIndoe had control of the hospital, this civilian doctor handled things a little differently. Military discipline was relaxed and rank ceased to matter among the airmen. However, the patients did call McIndoe the Boss or the Maestro. McIndoe provided freely accessible beer kegs to the ward, encouraged the men to wear their uniforms to restore pride, and hired pretty nurses to encourage them. But most of all, he treated the men how they deserved to be treated: like human beings.

Ward III resembled more of a gentleman's club than it did a hospital. Since the free beer was their primary comfort against their pain and suffering, the men under McIndoe's care established a drinking club in 1941.

Knowing that they themselves were a new breed of patient under the care of a pioneering surgeon, they called themselves the Guinea Pig Club. This was their acknowledgment of the reality of their situation: they were experiments. McIndoe's techniques were groundbreaking, but they were also tests. Sometimes they worked and sometimes they didn't. When they didn't work, these mistakes served as a learning experience.

Initially, the Guinea Pig Club was just a small group of 39. Members included the aircrew patients in the hospital and the surgeons and anesthesiologists who treated them. However, as the war raged on and the bombing campaign continued, those numbers only grew. By the end, there were over six hundred members.

The Guinea Pig Club remained active even after the war. In fact, members continued to meet up for over sixty years later. In 2003, there remained around 200 survivors; by 2007, there were 97 and their ages ranged from 82 to 102. The final annual reunion was held in 2007 because many of the survivors were far too frail to continue meeting.

A film entitled The Guinea Pig Club is slated to be filmed this year. The film is described as telling the story of Archie McIndoe who, -at the height of World War II, defied the British establishment with his radical methods aimed at healing severely burned bodies - and more importantly the tortured souls - of Britain's heroic Royal Air Force Pilots.-