We met Tom Szulborski by chance on an overcast Thursday at the Mid-Atlantic Air Museum near Reading, PA.


The day was World War II-themed: there were some folks in costume, others in flight suits, and largely one of the best examples of an agreeable crowd we'd ever seen. There's no community quite like the aviation community.

Patrick and I had been on assignment shooting an interview and capturing some footage of a World War II era C-54. I struck up a conversation with Tom briefly about aviation and what he'd found interesting about it. Tom told me a bit about his dad, and his journal-which he had been showing to youngsters and interested folks at the event that morning. It detailed some of the highlights of his father's military career. He hadn't said much about him, or his career, but it was obvious Tom greatly admired his father.

A few weeks later, we'd received a few emails from Tom with more information about his father, who-it turns out-was a local celebrity in his small Pennsylvania hometown, upon returning home from WWII. Staff Sergeant Walter J. Szulborski, only 22-years-old when he returned home from the war, had flown fifty missions as an Army Air Force gunner over the hottest targets during the struggle, including Berlin, Germany.

His crew was the first stationed in Italy during the war to return home with no casualties. The young man was quoted as saying:

Everybody in a fighter plane is scared. All you have to know is how to pray when the them] have it.

Walter was so eager to see combat that he continually switched his positions on the flight crew. For a few missions he flew as a waist gunner, then the tail gun position. A few more action-less missions led to the young gunner trying out the upper turret and lower turret. Of course, those efforts were also fruitless.

Szulborski was quoted as calling it "bad luck." 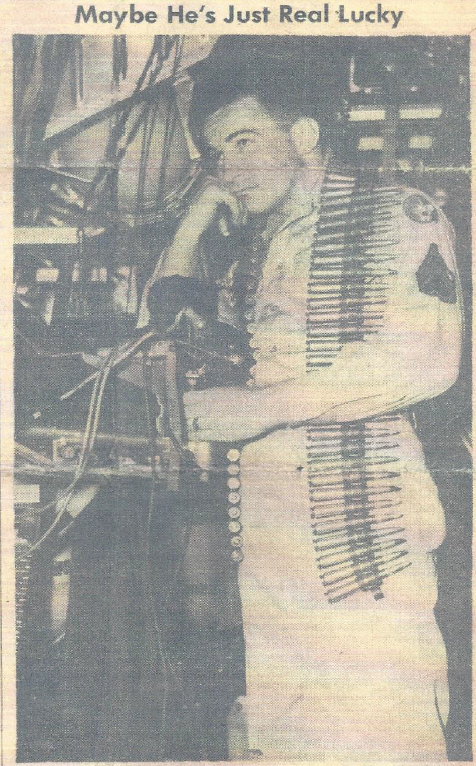 While his idea of bad luck may be a lot different than most people, you just have to appreciate that certain brand of WWII-era toughness.

The thing that bothers me most is the fact that when I went overseas with my group in November of 1943, I was as well trained and qualified a gunner as any man in the Air Force. It sure was a waste of training.

We certainly couldn't say that-neither would his future son, Tom. Every sacrifice that Sgt. Szulborski made, in combination with every sacrifice that he was so willing to make, cement him as one of the many great heroes who fought for our country (even if they didn't get to fire a bullet). In the name of freedom, Sgt. Szulborski had done everything he needed to do and more.