While the design for the Messerschmitt Me 262 began pre-World War II, it didn't reach operational status with the Luftwaffe until mid-1944. Even then, only small numbers of Me 262s actually appeared in combat.

Several years before the onset of WWII, Germans saw the potential for aircraft utilizing Hans Joachim Pabst von Ohain's jet engine (constructed in 1936). In the late 1930s, Ohain got together with aircraft designer/manufacturer Dr. Ernst Heinkel to create the world's first jet aircraft--the Heinkel He 178. After the He 178's successful test flights, and within a week of Germany's invasion of Poland, Germany adopted the jet engine for an advanced fighter aircraft. This began the development of Projekt 1065.

The Reichsluftfahrtministerium (RLM, Ministry of Aviation) requested a jet aircraft capable of one hour's endurance and a speed of at least 530 mph. For the project,  Dr. Waldemar Voigt headed the design team with Messerschmitt's chief of development, Robert Lusser, overseeing.

Designers first drew up plans for the Me 262 in April 1939. They submitted plans two months later. These design plans were significantly different from the aircraft that would eventually enter service in 1944. One of these changes was in wing design; technical issues involving the jet engine delayed progression and called for changes in wing design. Messerschmitt initially designed the engine for wing roots but made the change to underwing pods. This placement was important for availability and maintenance.

Besides engine issues, the jet engine program also faced funding issues. Initially, many high-ranking German officials believed the war could be won solely with conventional aircraft. Hermann Göring, head of the Luftwaffe, was among those who didn't see the benefit of jet engine power. 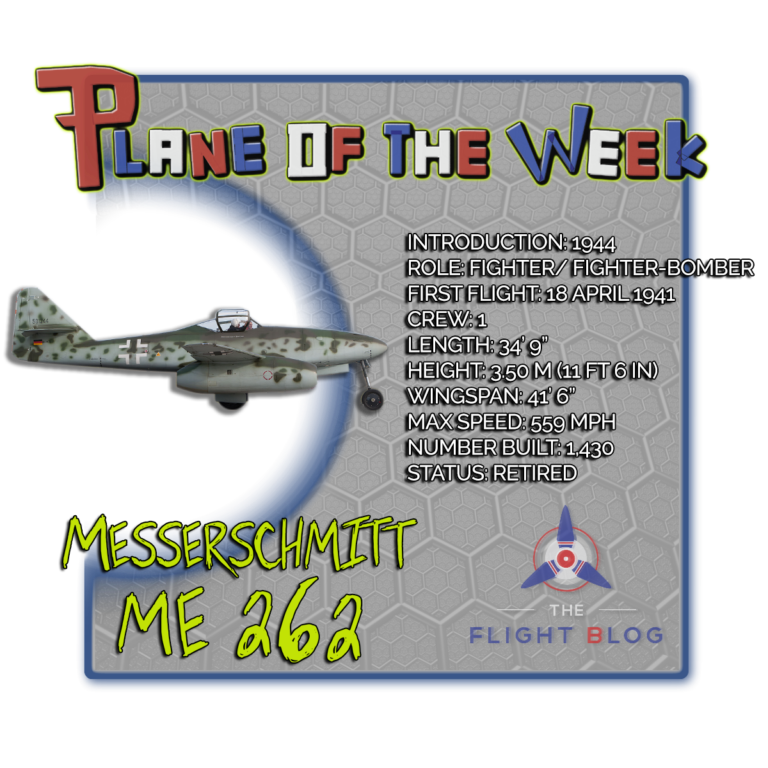 In mid-1943, Adolf Hitler envisioned the Messerschmitt Me 262 as a ground-attack/bomber aircraft rather than a defensive interceptor. Hilter's edict resulted in different versions of the Me 262: the Schwalbe ("Swallow") fighter version and the Sturmvogel ("Storm Bird") fighter-bomber version. For a while, historians thought Hitler's edict delayed the Messerschmitt Me 262 introduction into combat. However, this delay had more to do with lengthy and difficult jet engine development.

On April 19, 1944, Erprobungskommando 262 became the first test unit to introduce the Me 262 into service and train a corps of pilots to fly it. In July 1944, the unit was redesignated to Kommando Nowotny. Essentially a trials and development unit, Kommando Nowotny mounted the world's first jet fighter operations. They flew initial operational missions against the Allies in August 1944. The unit claimed 19 Allied aircraft in exchange of six Me 262s lost.

The Messerschmitt Me 26 proved to be faster and more heavily armed than any Allied fighter, including the British jet-powered Gloster Meteor. For the rest of the War, the Me 26 has a number of roles, including light bomber, reconnaissance and experimental night fighter versions. Me 262 pilots claimed a total of 542 Allied aircraft shot down.

Even though it was one of the most advanced aviation designs used in World War II, the Messerschmitt Me 26's  success only represented about 1% of Germany's attacking force. Of the 1,443 Me 262s Messerschmitt produced, only around 300 actually saw combat. The other aircraft were destroyed either in training accidents or by Allied bombing attacks.

German use of the Me 262 ended with the close of the war. However, a small number were operated by the Czechoslovak Air Force until 1951. Captured Me 262s studied by major powers influenced the designs of several of post-war aircraft including the North American F-86 Sabre and Boeing B-47 Stratojet. A number of Me 262s have survived and are on static display in museums. There are also a few privately built reproductions utilizing modern General Electric J85 engines.