In a world of fabric-and-wood, be metal.

The Junkers F.13 was one of the most advanced aircraft of its time. Developed in Germany at the end of WWI, this advanced cantilever-wing monoplane was the first ever all-metal transport aircraft. It was also Junker's first commercial aircraft--not too shabby considering they would go on to sell over 300 F13s during the course of 13 years of production.

Junkers Flugzeug- und Motorenwerke AG (more commonly Junkers) was a major German aircraft and aircraft engine manufacturer founded in 1895 by Hugo Junkers. Initially, the company manufactured boilers and radiators, but by WWII they were producing some of the most successful Luftwaffe planes. Junkers also produced successful piston and jet aircraft engines. While Hugo Junkers is credited with pioneering the design of all-metal airplanes and flying wings, Hugo played no part in the development of these later aircraft and engines, as he was forced out of his own company by the Nazi government in 1934. Hugo died in 1935 on his 76th birthday. Though the company survived WWII, mergers, and joint ventures, they became defunct in 1969.

Though the Junkers company hasn't lived on, its legacy of the Junkers F.13 has--and for good reason, too.

Compared to other aircraft of the period, Junker's designs were the only ones of comparable modernity. The F13's all-metal design and style of an unbraced monoplane were both unusual in an era dominated by biplanes. Biplanes, though they traditionally have structural advantages over monoplanes (in terms of wing structure), also produce greater drag compared to cantilever (unbraced) monoplanes. 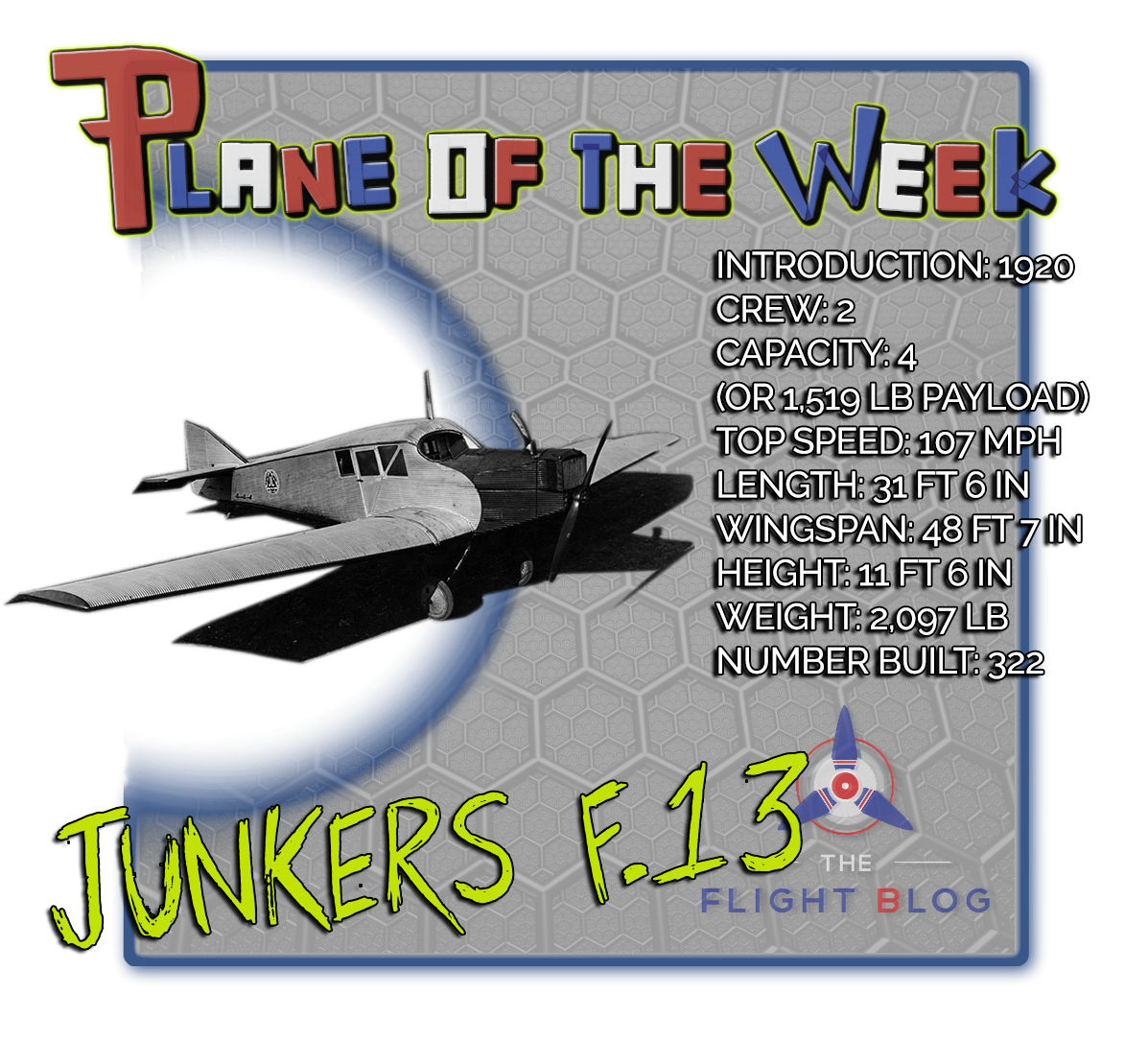 Externally, the F13's structure was aluminum alloy covered with corrugated and stressed duralumin skin. The wing was built on 9 circular cross-section duralumin spars with traverse bracing. Behind the engine, the cockpit was semi-enclosed (roofed but without side glazing). The cabin, which could hold 4 passengers, was enclosed, heated (another innovation), and had windows and doors on the fuselage sides. in another unusual move for the time, the passenger seats had seat belts.

Although there was major competition among civil aircraft manufacturers immediately after WWI due to the surplus warplanes that could be converted, the Junkers did well. It was so popular, in fact, that Junkers carved a significant market share for the F.13 in the airline industry. In 1919, Junkers picked up orders in Austria, Poland, and the USA. In the years following, they also picked up more orders abroad from SCADTA (Colombia) and the U.S. Post Office Department. In Bolivia, LAB Airlines's first plane was a Junkers F.13. by the mid-1920s, nearly 40% of commercial air routes globally were serviced by F13s. The last commercial F13 was retired in Brazil in 1951.

Of the 300+ original Junkers F.13 aircraft produced, very few exist. Of those remaining aircraft, most are in museums, and none of them are flyable. The F13 will be returning to the skies, though, thanks to a project by the luxury luggage-maker RIMOWA and the Swiss airline company Ju-Air. Their replica F13, which is a near-carbon copy of the original (due to necessary modifications to comply with modern flight safety standards) made its first flight in September 2016 and by May 2017 they expect certification and first delivery of the aircraft.