The British Hawker Hurricane was one of the most important fighters for the Royal Air Force early on in WWII. It, along with the Supermarine Spitfire, earned victory laurels during both the Battle of Britain and the defense of Malta. While the Spitfire was the more popular of the two, the Hurricane served in all major theatres of WWII (where British forces were engaged) and accounted for sixty percent of RAF air victories in the Battle of Britain.

While the Spitfire and the Hurricane were both important aircraft, that's pretty much where the similarities end. Both aircraft were born under very different circumstances from completely different backgrounds.


The Hawker Hurricane's development was an evolution of WWI's fabric-covered biplanes. RAF officials and British aircraft designer Sir Sydney Camm began discussing a proposed monoplane derivative the Hawker Fury biplane. At the time, the Air Ministry preferred biplanes and lacked interest in the project; however, Hawker continued to refine their monoplane proposal. Their work resulted in several innovations that became critical to wartime fighter aircraft, including a retractable undercarriage and a more powerful engine.

Although the Hurricane was still constructed of wood and fabric, it was revolutionary for its time. Not only was the Hurricane the RAF's first monoplane fighter, it was also its first fighter to exceed 300 mph.

Sydney Camm was Hawker Aircraft's chief designer and the leading force behind the Hurricane's development. When the British Air Ministry issued specifications for a new generation of fighter aircraft in 1934, Camm's initial submission was the Hawker P.V.3. Essentially a scaled-up version of the Fury biplane, it was not among the aircraft chosen to be constructed as a government-sponsored prototype.

Camm worked on a new design, but this, too, failed to impress the Air Ministry. In response to this rejection, Camm further developed the design. After wind tunnel tests, the Air Ministry ordered a prototype of the "Interceptor Monoplane." 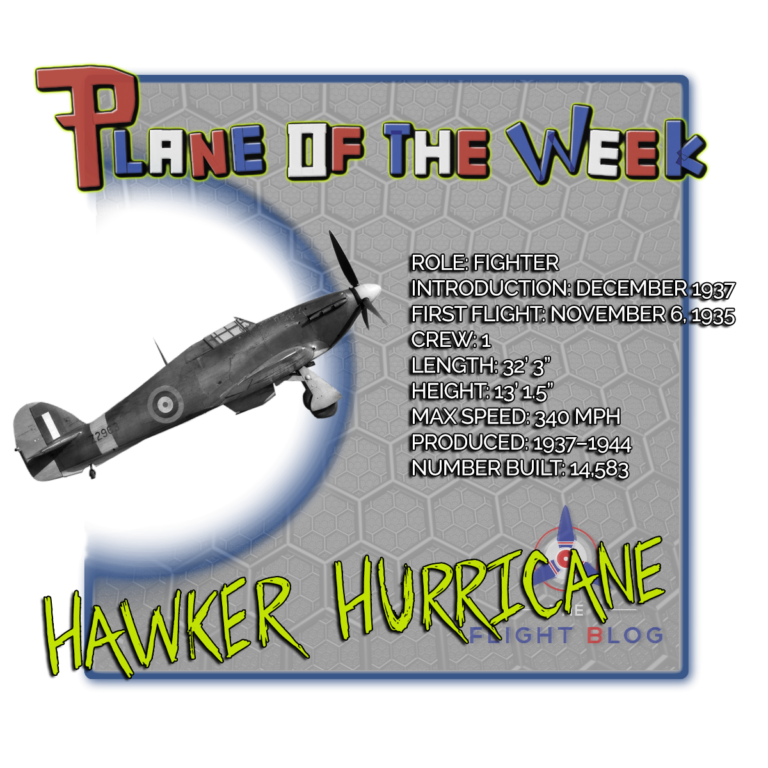 
The Hawker Hurricane had its first test flight on November 6, 1935. The flight was favorable, but the Air Ministry was still uncertain about the unconventional plane. They didn't officially order production of the Hurricane until seven months after the test flight in June 1936.

This new monoplane fighter had eight machine guns, an enclosed cockpit, and retractable landing gears. While these would become standard for WWII-era aircraft, at the time these were considered unorthodox.

The Hawker Hurricane had relatively simple construction and was easy to manufacture-it was also far cheaper and less labor-intensive to produce than the Supermarine Spitfire.

The maiden flight of the first production Hurricane took place on October 12, 1937. The first aircraft entered service with the RAF in December 1938 when four joined No. 111 Squadron. By February, they received 16 Hurricanes.

When the Air Ministry realized that war was not far off, Hurricane production went into high gear. By the time World War II was officially declared, nearly 500 Hurricanes had already been delivered and 18 squadrons were equipped.

During the infamous Battle of Britain, 33 squadrons of Hawker Hurricanes and 19 squadrons of Supermarine Spitfires faced the Luftwaffe between July and September, 1940.