When it comes to crash testing, it's not such a big deal for cars. This form of destructive testing is often performed by car companies to ensure safety design standards in both crashworthiness and crash compatibility. For road vehicles, the Insurance Institute for Highway Safety (IIHS) rates vehicles on how well they protect their occupants in a crash-an important bit of information, considering nearly 1.3 million people die in road crashes each year.

But while you've probably seen car crash testing frequently highlighted in  car commercials, when was the last time you ever saw an airline highlight an airplane crash test? Have you ever seen one? They don't happen very often.

The Controlled Impact Demonstration (also known as the Crash in the Desert) was a joint project between NASA and the FAA. The flight experiment was to acquire, demonstrate, and validate technology for improving transport aircraft occupant crash survivability. Specifically, they wanted to test a promising new fuel additive for retarding/suppressing fire in a real-world aircraft crash-landing scenario. When blended with standard Jet-A fuel, the FM-9 additive demonstrated the potential to inhibit ignition and flame propagation of the released fuel in impact test simulations. 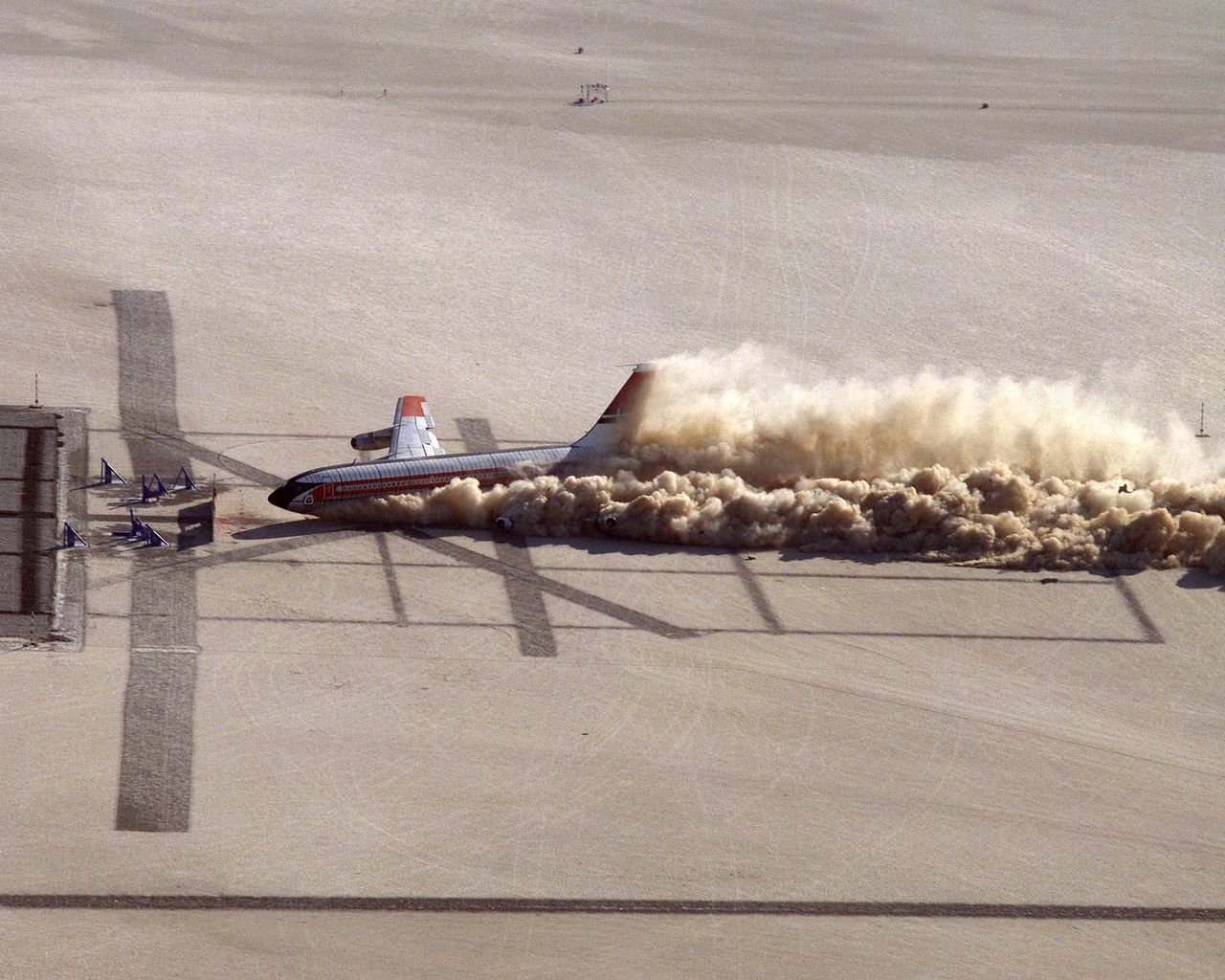 According to NASA, the anti-misting kerosene (AMK) additive couldn't be added directly into a gas turbine engine; instead, the AMK had to be restored to almost Jet-A before being introduced into the engine for burning. This "degradation" was accomplished by using a "degrader" on each of the B-1720's 4 Pratt & Whitney JT3C-7 engines (built and installed by GE). Additional crash research during the CID involved a structural loads measurement experiment; instrumented dummies (not unlike the ones you'd find in a car crash test) sat in the passenger seats of the aircraft.

Over the course of those 4 years, NASA developed the remote piloting techniques so the B-720 could fly as a drone aircraft; GE installed and tested their degraders; and the FAA refined the AMK additive (which involved blending, testing, and fueling a full-size aircraft). This particular aircraft had 15 flights over the course of the experiment (15 takeoffs and 14 landings). Each preliminary flight was used to introduce the additive slowly while monitoring engine performance.

The final flight (with zero crew members) was remotely flown by NASA research pilot Fitzhugh Fulton. The flight plan called for the B-1720 to touch down with its landing gear retracted on a specially-prepared gravel runway on side of a dry lakebed. The aircraft was to crash-land with its wings level on the runway centerline so the fuselage would remain intact as the wings were sliced open by steel posts cemented into the lakebed.

As the aircraft neared impact, the left wing dropped and contacted the ground first without contacting the wing cutters. The nose of the airliner swung to the left as the B-1720 skidded on the lakebed surface at a 45-degree angle. One cutter struck the inboard engine on the right wing, which destroyed the engine and caused a massive fuel leak that immediately erupted in flame. The  Crash in the Desert ended with a massive fireball--not exactly a success for the fuel retardant additive.

While the CID was a major setback for AMK (as the FAA canceled the requirement for airlines to use antimisting additives), the data NASA collected on crashworthiness was deemed successful and equally important.

Since the 1984 crash of the B-720, one other Boeing aircraft has been intentionally staged to crash–this time for television.

On April 27, 2012, an unmanned Boeing 727-200 crashed near Mexicali, Mexico. The aircraft was outfitted with cameras, crash-test dummies, and scientific instruments with the intent of filming it for television. The aircraft itself was purchased by the television production company, and the crash had to occur in Mexico because U.S. authorities would not allow the test to take place.

The flight was initially piloted by captain Jim Bob Slocum (Mexican authorities required a human pilot during part of the flight since it would be flying over a populated area), then remotely controlled by Chip Shanle.

The aircraft took off from General Rodolfo Sánchez Taboada International Airport in Mexicali with the flight group, a few passengers, and of course the crash dummies. A chase plane followed behind. As they neared the Sonoran Desert of Baja California in Mexico, the human occupants parachuted to safety. The 727 hit the ground at 140mph: upon impact, the aircraft broke up into several sections and the cockpit was torn from the fuselage.

After the crash, the site got a full environmental cleanup and salvage operation. From the experiments and data collected, they concluded that in crashes like this (where the front of the aircraft hit the ground first), passengers at the front were the most at risk; those seated closer to the wings had survivable injuries; and those near the tail section had the best chance of walking away without any serious injuries.

The Discovery Channel produced a documentary about the experiment, which you can watch in its entirety here (if you have a spare hour). Otherwise here’s a condensed version: