When we were kids, everything was fun. What happened?


Enjoying the simple things is a luxury not many of us "adults" can afford, most times. We fill our lives with careers, meetings, cell phones, bills, exercise, cooking, cleaning, 'The Voice' re-runs, etc. You know, all the boring stuff.

For a second we'd like you to re-assume your childlike sensibilities. Mute your phone, get away from your desk, and leave the dishes in the sink. Your job is to find the nearest maple tree. There should be one close by-there are at least 128 species of maple trees and the majority of the continental United States is host to several of said species.

Millions of maple seeds across the United States are falling right at this moment. Some journey further from the tree than others, but they all eventually make their graceful descent to the forest floor. You had likely taken closer notice of this phenomenon when you were a child-in fact, if you remember that day, your mind was probably blown. "They are just like little helicopters!" you almost-definitely said.

More closely related to the flight patterns of hummingbirds, bats, and many insects, the humble maple seed is arguably the most graceful flier in nature-albeit one without a beating heart.

For many years, the science behind the maple seed's flight was pretty misleading. Like most adults, the scientists more-or-less took it for granted-until now. Researchers at the University of Wageningen in the Netherlands built tiny synthetic stand-ins for maple seeds, and observed their swirling movement through controlled testing. Instead of dropping them through air, the scientists spun them through a tank of mineral oil using a robotic mechanism. 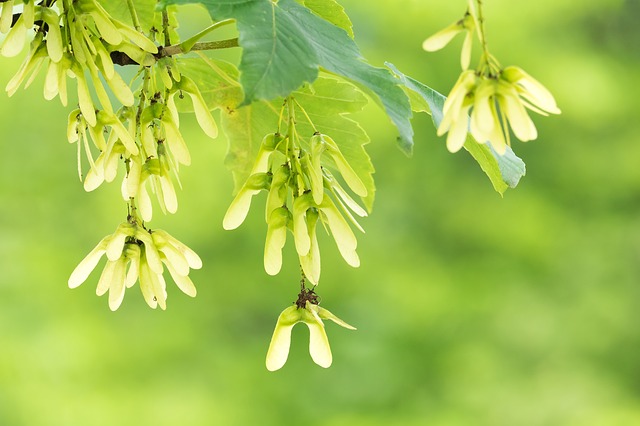 The researchers discovered that a maple seed "generates a tornado-like vortex that sits atop the front leading edge as the 'helicopter' spins slowly to the ground. This leading edge vortex lowers the air pressure over the upper surface of the maple seed, effectively sucking the wing upward to oppose gravity."

Pretty cool stuff. In fact, the unique flight patterns of the maple seed are being studied for much more than their intrigue.

Researchers at Lockheed Martin designed a so-called Samarai (no, it's not misspelled) drone. Instead of having the usual three or four blades commonly employed in drones, the samurai is designed with only one blade that counterbalances the weight of the drone while in flight. Researchers hope that one day they can design the same technology on a much, much smaller scale to aid the US military on the battlefield; they hope one day a miniature version of the Samarai can survey an entire battlefield or building unnoticed. You'll have to see it to believe it:


Unfortunately, these likely will come at a higher price than you would care to pay. But why should you? You're already outside, next to the maple tree, right?

You've already got a "treeful" of brilliant aerospace engineering right at your fingertips.