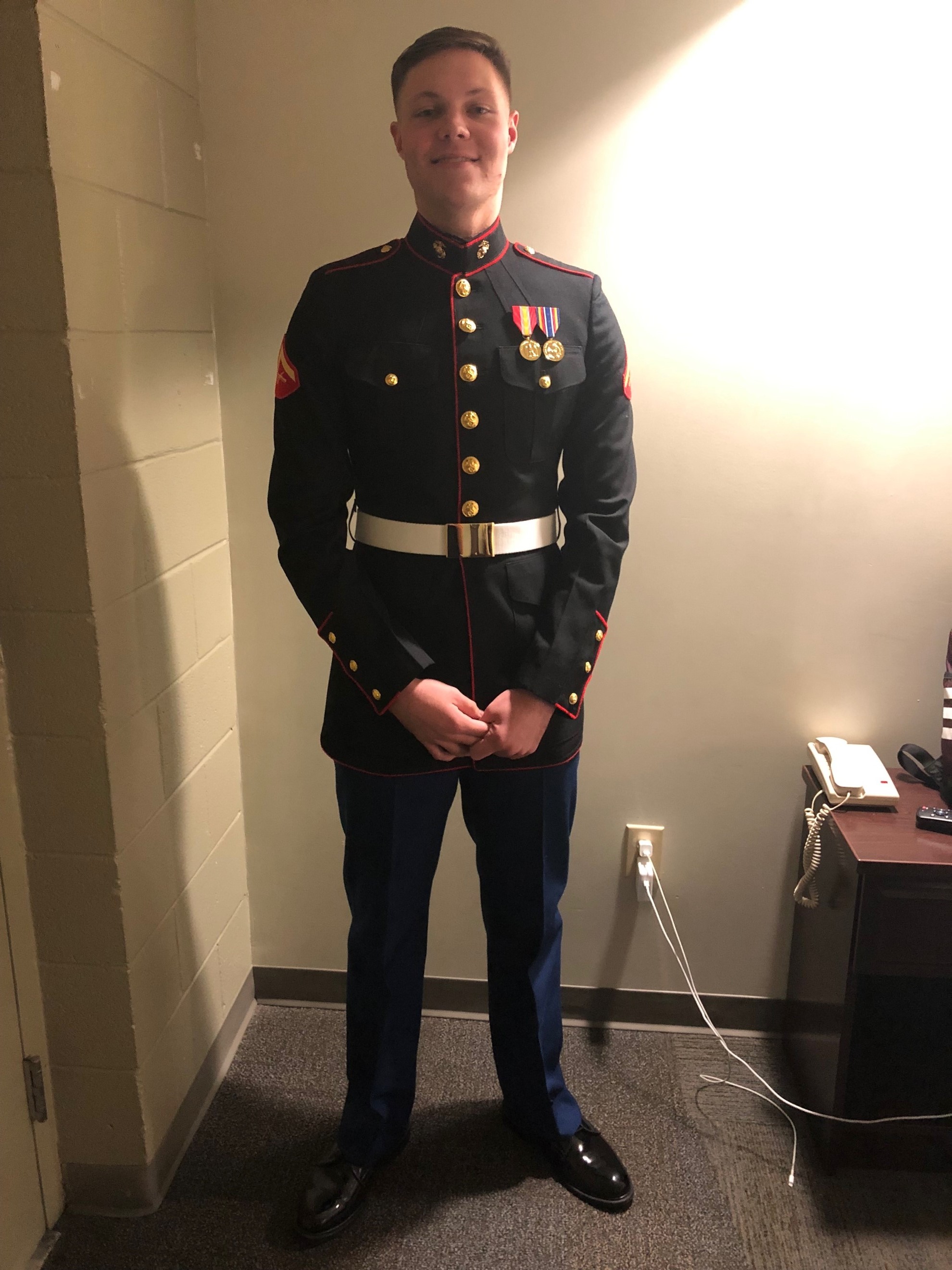 What made you decide to join the Marines?

I joined the Marine Corps because I wanted to better myself. I wanted a secure future, and I knew the Marines could give me that. I wasn’t looking to go to college because I thought that was the typical high school graduate way to go. So I chose the Marines.

How long have you been in the Marines?

I have been in the Marines for a little over a year now. I have gone through many challenges, starting with boot camp. Following boot camp was MCT ( Marine Combat Training). Then I went to my schoolhouse to train and learn how to be an air traffic controller for the Marine Corps. After I graduated the schoolhouse, I got stationed at Marine Corps Air Station, Cherry Point in North Carolina.

What is your rank?

I am a Lance Corporal of Marines. I hope to pick up the rank of Corporal in the late summer or early fall.

What is your occupation in the Marines?

I am an Air Traffic Controller. We make sure aircraft get places they need to go in a safe, orderly, and expeditious way.

What made you decide on being an air traffic controller?

I decided to be an Air Traffic Controller because it would translate very well in the civilian life after the military. I honestly did not know too much about everything an air traffic controller does, but I am glad I picked this job.

What was school/ training like to become an air traffic controller?

The school was very challenging. We learned an entire college degree in approximately 16 weeks. The military tends to fast track training to get us out and working. We had tests every three days and ran several simulations in regards to a tower controller and a radar controller. The school was very mentally challenging, and I had to work very hard to get to where I am today.

What are the differences between civilian and Marine air traffic controls?

The big difference is that we can be combat air traffic controllers in a time of war. We go as far as setting up our own runways in a combat zone and landing aircraft with mobile towers and radars that sit in the back of trucks. We also deal more with military jets and helicopters than the civilian air carriers. However, we still do handle them as well.

How many flights and landings do you service every day?

This depends very much on the time of year and day of the week it is. Specifically, Cherry Point used to be a very busy airfield, but recently one of out EA/6 squadrons got disbanded. So Cherry Point is not very busy at the moment. I would say that on a good day, we average about one hundred. That is in the tower, at least. Radar controllers handle much more aircraft.

What are some of the policies you need to follow to enter the tower?

Some policies we have to follow as air traffic controllers are related to alcohol use, caffeine intake, and other medication restrictions. We are not allowed to consume alcohol 12 hours before we start a shift. We are also prohibited from taking certain supplements like pre-workout and so forth.

Is your job stressful?

My job can be very stressful because so much can be going on at once, but you always have to remain calm no matter what. So many things can change within the blink of an eye.