The Denver International Airport (DIA or IATA: DEN) isn't your typical airport. At 33,531 acres, it is the largest airport in the US (by total land area). It is also the sixth busiest airport in the US and one of its runways, 16R/34L, holds the record for longest public use runway in the United States. Located in northeastern Denver, this airport was voted "Best Airport in North America" for Business Traveler Magazine six years in a row between 2005 and 2010. Time Magazine named DIA America's Best Run Airport" in 2002. Skytrax also rated DIA as the second "Best Regional Airport in North America" for 2017, and the fourth "Best Regional Airport in the World."

But for all of the airport's accolades since its opening in 1994, they're not the reasons for a majority of DIA's notoriety. The internet is obsessed with the Denver International Airport for several conspiracy theories surrounding the it for the past two decades. And the airport? Well, they're not discouraging these conspiracies, either. 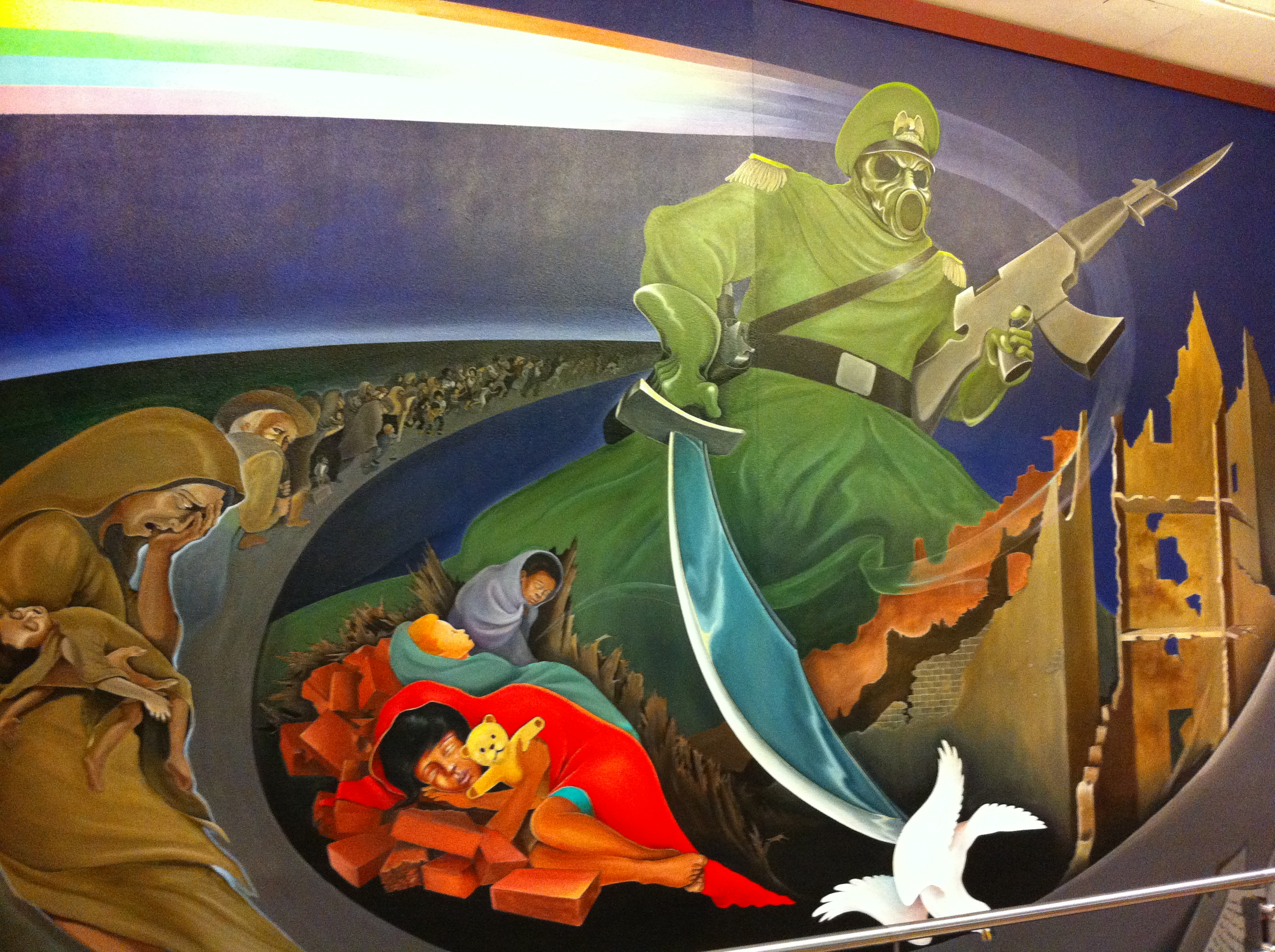 The Denver airport is home to a 40-piece public art collection which is, of course, a major player in the various conspiracies surrounding the place. These conspiracies point to a variety of meanings and perpetrators, including the Freemasons, Illuminati, New World Order, and Nazis.

Perhaps most notable are the airport's 28-foot wide murals that line the walls on Level 5 of the Jeppesen Terminal. These murals by artist Leo Tanguma -tells a hopeful story of peace and environmental stewardship following times of war and pollution.-

Conspiracy theorists, however, point to the content of these murals as depicting The New World Order taking over. Many believe the murals tell the story of apocalyptic biowarfare, rather than the rise of peace from destruction. People tend to focus on the grim images, such as the scary Nazi soldier and the name of a child who died at Auschwitz.

Besides the murals, others point to the seemingly ominous presence of gargoyles throughout the airport. For this, the airport notes that historically, gargoyles have been used functionally and decoratively as symbols of protection. But rather than the terrifying ones that might haunt your nightmares or next horror movie, these figures are -playfully popping out of open suitcases.- Ooh, terrifying. 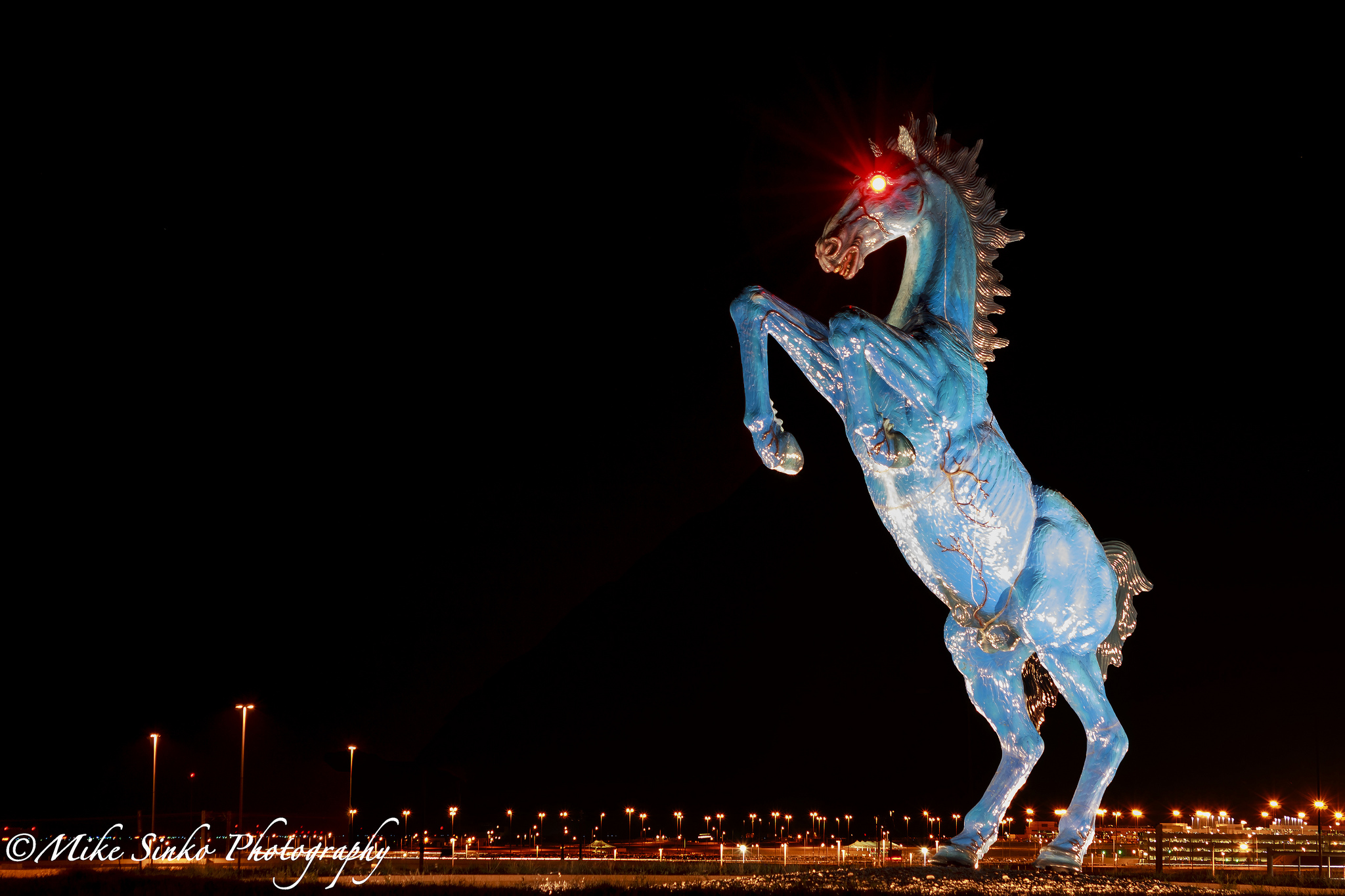 Speaking of art, we would be remiss if we didn't discuss the major elephant in the room-or, uh, Mustang near Peña Boulevard.

Outside the airport is a large blue horse statue titled Mustang-affectionally re-dubbed -Blucifer- by conspiracy theorists. This 32-foot tall statue is 9,000 pounds of blue horse with eyes that glow red both day and night. Some speculate that the statue, created by artist Luis Jimnez, represents the Fourth Horseman of the Apocalypse from the biblical book of Revelations (AKA Death). This speculation is further enforced (for some) by the statue's history of killing its artist. In 2006, prior to the statue's completion, a piece of the statue fell on Jimnez and severed an artery in his leg.

According to Heather Kaufman, director of arts and public events at DIA, Mustang's red eyes are an homage to the artist's father who worked neon signs. The red neon is just -hindsight.- Nothing malicious here, folks. 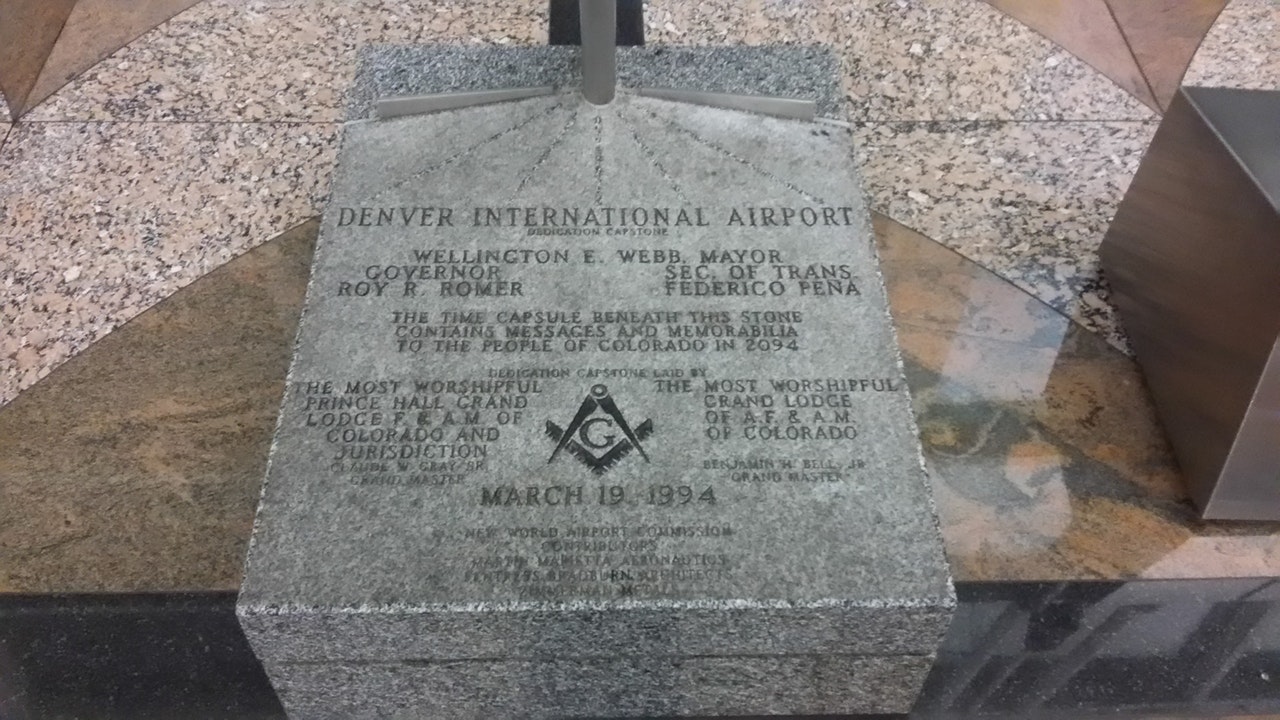 The DIA hosts a time capsule that isn't to be opened until 2092. Inside this time capsule are coins, a signed opening-day ball from Coors Field, Mayor Wellington Webb's sneakers, a few Black hawk casino tokens, and various other items. On the outside, the memorial capstone is scribed with the Freemason symbol and the words -New World Airport Commission.- This coupled with -strange- markings found throughout the airport are supposedly indicative that the Freemasons have been in control of the airport since it opened. Further, the Freemasons have clearly had ties to the New World Order. Right?

And those strange symbols? They're actually Navajo-language characters. 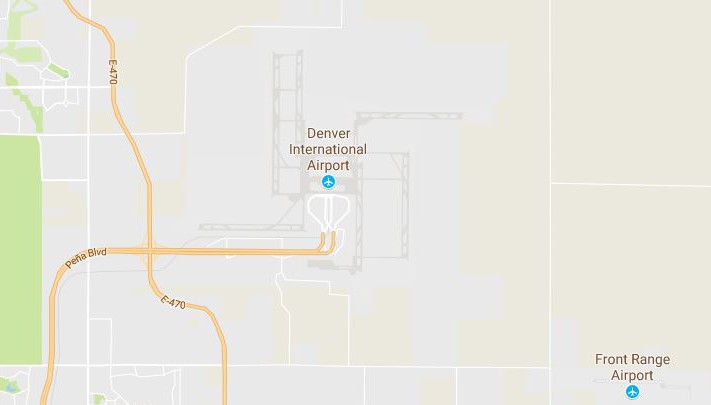 Well, if the other conspiracy theories aren't true, then why are the Denver International Airport's runways shaped like a swastika?

Yeah, some people look at the aerial view of the DIA runways and think of Nazis. If you think that it's a little odd or at the very least a-typical, you're not wrong. Airport runways don't typically have this shape. However, this is more practical than malicious. According to an airport representative, the runways are such a way so they can be used simultaneously no matter the weather condition because none of them overlap. She also thinks they look more like a pinwheel. 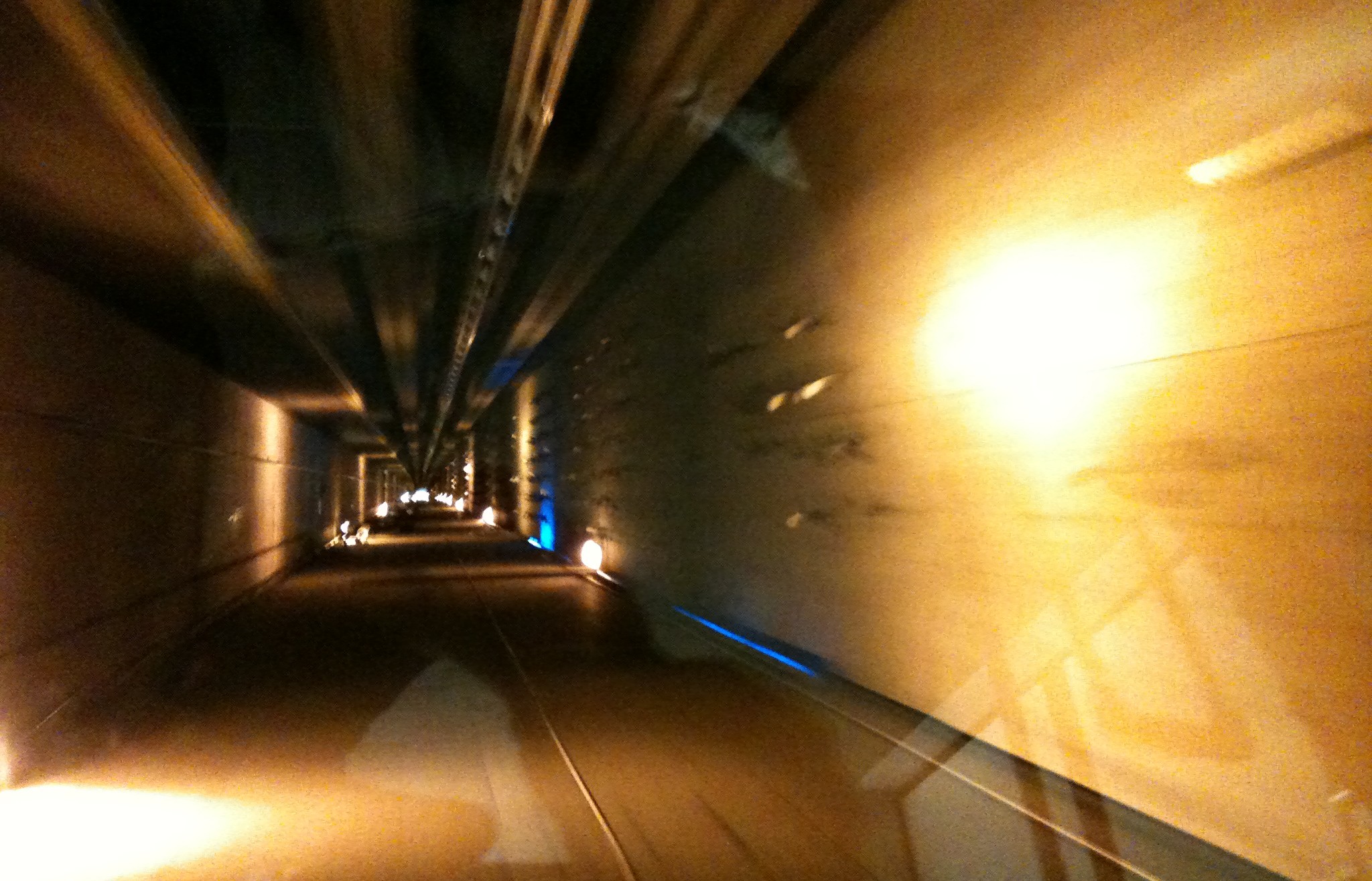 Sometimes the conspiracies aren't about what's in the airport, but rather what's under it.

When the airport finally opened in February 1995, construction had been 16 months behind schedule, and a whopping $2 billion over budget. Its total cost was $4.8 billion-AKA a lot of money. With a budget like that and huge construction delays, people wondered where all that money had gone. Was the answer below ground?

One former airport construction worker claimed that the delays were due to the construction of multistory buildings underneath the airport. Other people have also chimed in claiming there is a complex labyrinth of tunnels below ground. Among these networks, theorists say, is a tunnel connecting DIA to the North American Aerospace Defense Command outside of Colorado Springs (nearly 100 miles away).

People have also theorized that anything from underground New World Order command bunkers, to post-apocalyptic fallout shelters for the global elite, or even a concentration camp.

In truth, these underground tunnels are a part of the DIA's rail system and baggage system.