While pilots typically love the freedom afforded by flying in the open skies, that wide, open space may appear to get smaller and smaller as more drones take to the air.

Recently published research commissioned by the FAA finds that high-speed collision between an airliner and a drone is more damaging than bird strikes. In the event of a collision, a drone could cause significant same to an aircraft's engine or tail area, as demonstrated by recent animations. And if you know anything about the dangers birds can pose to aircraft-you know that's saying something. And if you don't, just reconsider the January 2009 -Miracle on the Hudson- ditching of US Airways Flight 1549.

If a flock of Canadian Geese can bring down an Airbus A320-214, just imagine what a bird or drone could do to a much smaller plane.

The threat of bird collision is a known threat and airplanes are designed to withstand a bird strike of up to 4 pounds to the windscreen and 8 pounds to the fuselage. The reality is that of all the bird collisions that occur in the air, few are serious enough to damage a jet engine like Flight 1549.

While no modern drone has yet to have collided with a manned aircraft in US airspace, this study's findings highlight fears that have been considered a potential threat since UAs have taken to the skies in "mass" numbers. Private drone sales have increased, and with those increases in sales come more frequent incidents involving drones flying too close to aircraft and airports. While their numbers are unlikely to come close to the number of birds (some 10 billion in US airspace alone), reckless UA piloting should be considered.

For 2017, there has been an average of 250 drone safety incident reports per month, a number which has significantly increased from 159 per month last year. Most drones disappear after encounters with aircraft. Because they are so small, they're not picked up by radar, nor are they equipped with transponders that could broadcast their locations. While around 838,000 people have registered their drones with the FAA, the agency estimates that there will be 2.3 million devices purchased this year alone. The lack of registration makes it difficult to tie an errant drone to its owner/pilot. 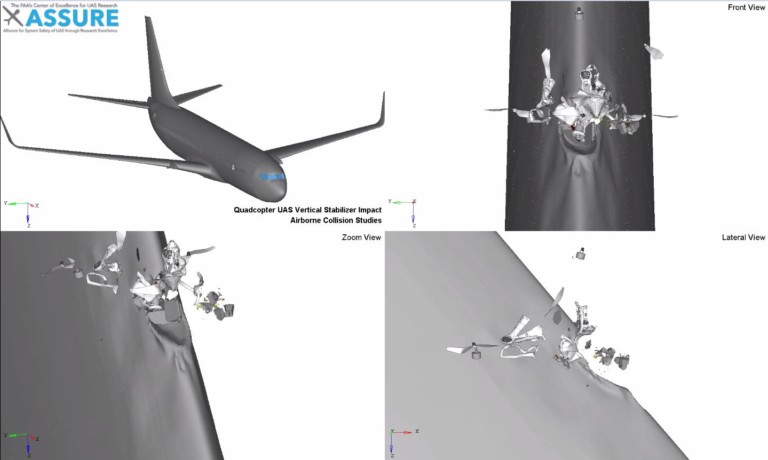 Of course, the FAA regulates where drones can legally fly; in the US, drones are prohibited from flying within five miles of airports and cannot exceed 400 feet in the air. However, high altitude drones do exist and hobbyists can actually fly them to 10,000 feet.

Though no collisions have occurred, dozens of pilots have reported drones flying within 500 feet of their aircraft-a proximity which doesn't give pilots much time to react. High-altitude flying isn't even always the problem, either. Drones can impact aircraft flying at low altitudes, such as lightweight sport aircraft and helicopters. Earning a sport pilot license doesn't require as much training as a private pilot license, and the limited training could especially affect a pilot's ability to dodge a rogue drone in close proximity.

Police departments also deploy helicopters to circle low, either monitoring a scene or searching for a suspect. Because they fly fast and they fly low, drones can be a problem. In 2015, for instance, a drone came within 50 feet of an LAPD chopper. Technically, the airspace 800 feet above Los Angeles should be free of drones, but they have clearly been spotted in -illegal- airspace. If a drone did collide with a 5,550-pound helicopter, that could be catastrophic.

Another potential threat regarding a drone collision is its lithium-ion battery. While the batteries do tend to shatter in most high-impact collisions, in cases where the battery remained partially intact, the began heating up. Lithium-ion batteries are known for their potential fire hazard, and a hot, damaged battery could pose a fire danger if it got lodged in the aircraft post-collision.

Is there actually a threat?

While it's hard to say just how big a threat drones are (or may be) to aircraft since no collisions have occurred, the potential does linger and grows with the increase of drone purchases. The problem isn't so much with the drones themselves-the mass majority of drone pilots follow FAA regulations. However, the problems arise from those who don't. Some have suggested that the best ways to handle this problem are to limit how high drones can actually fly and to include mini transponders on them to limit their relative invisibility in the air.

Do you see drones as a threat to aircraft? Tell us in the comments below.