While the next big thing in aviation might look like the butt of a joke, its potential is anything but. 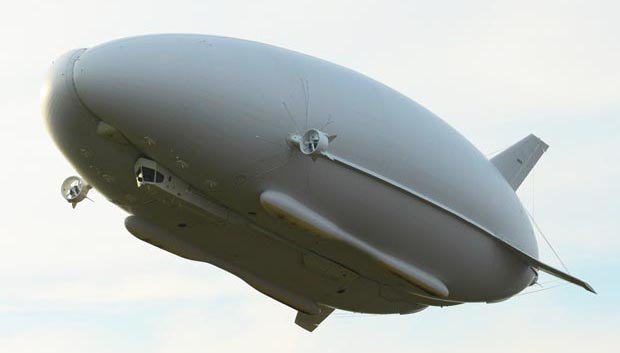 The Airlander 10 has been introduced to the world as the largest aircraft currently flying. CNN affectionately refers to this beast of a hybrid air vehicle as -part airship, part helicopter, part plane--and its looks are exactly what you might expect from a chimera such as this.

Getting to the point: you don't need CNN to tell you that it looks like a -flying bum- because that was probably one of the first things anyone has noticed about this 92-meter-long ship (if your mind works in feet, that's a little over 300 of them). But the unfortunate aesthetics of the Airlander 10 are the result of very purposeful design.

That large-envelope with its aerodynamic shape is filled with helium and, according to the technical date sheet found here, -provides 40% of the vehicles lift.- The envelope volume, just in case you were wondering, is approximately 1,340,000 ftᶟ.

" can stay airborne for up to five days at a time if manned, and for over 2 weeks unmanned. It will fulfil a wide range of communication, cargo carrying and survey roles in both the military and commercial sectors all with a significantly lower carbon footprint than other forms of air transport."

Multi-purpose and environmentally-conscious? Just goes to show you that it really is what's on the inside that counts.

With its huge size and all its perks, it's hard to imagine why (or how?) this project remained such a secret for so long. The airship was only just revealed north of London on March 21, already assembled. But the ship itself isn't brand new. The Airlander 10 has lived a double life (or has at least switched careers). Originally a U.S. military project (understand the secrecy now?), the project was grounded because of budget cuts. Now with further development and a new country behind its funding, the Airlander 10 is ready to take off and begin logging its 200 hours of test flights.

Something old, something new

While The Airlander 10 is a new concept for airship development, airships themselves have been around for a long time-the first airship flight took place 50 years before the Wright Brothers', although their use decreased circa the 1940s because airplane capabilities surpassed those of the airships. Arguably the most famous airship is the LZ 129 Hindenburg (usually simply known as The Hindenburg) that caught fire 6 May 1937, killing 38 people.

The tragedy of The Hindenburg may have led to some inaccurate perceptions of rigid airships, as seen in an episode of the FX adult animated TV show Archer. Episode 7 of season 1 (titled -Skytanic-) takes place aboard the luxury airship Excelsior. Numerous references to the Hindenburg are made throughout the episode, despite the reassurance that the ship is filled with helium (whereas the historic Hindenburg was filled with Hydrogen).

Helium, unlike Hydrogen, is a nonflammable gas, which is in itself a first step towards a safer ship. The Airlander 10, like the fictional Excelsior is filled of nonflammable helium. So have no fear.

The Airlander 10 has the potential (or at least the hype) to be the frontrunner of aviation future. Nick Allman, the program director for Hybrid Air Vehicles, told CNN -It's going to be cheaper, it's going to be greener, we're going to be able to go places we can't go to and from now.-

Sometimes you need to go backwards in order to go forward-and sometimes that entails looking to improve old or outdated technologies with modern of futuristic innovation. While a great deal of focus is on improving the modern airplanes we rely on-making planes faster, -greener,- economic, etc.-perhaps the focus needs to be shifted to an entirely different type of aircraft. Maybe Hydrogen planes aren't our future. Maybe Helium rigid airships are. Can traditional airplanes be replaced by aircraft such as the Airlander 10?

For the full story, head over to CNN