Experimenting--it's a perfectly normal phase in every aircraft's life. Some just never quite grow out of it.


If ugly ducklings could fly (they can't until 12 weeks of age, by the way), they might be called Stipa-Caproni. At least if they were Italian ducks. What's a little more certain is for many, this aircraft is one big ugly duck.

But beauty's only fuselage deep, right?

Luigi Stipa was an Italian engineer and aircraft designer who, in the 1920s, started working on ways to make aircraft more efficient. Bernoulli's principle (an increase in a fluid's speed occurs simultaneously with a decrease in pressure or decrease in the fluid's potential energy) was the basis for his theory. He believed that the same principle could be applied to air flow.

Stipa theorized than an aircraft's engine could perform more efficiently by directing its propeller wash through a venturi tube.  He called this an "intubed propeller." This was a radical concept and he managed to prove its feasibility mathematically--all on paper.

Stipa spent years working on his ideas. Eventually, he was able to refine his engineering work (still all on paper) enough to present it to the government in hopes of funding this aircraft.

He managed to petition the Italian Fascist government to produce a prototype of his aircraft design. By his design, the aircraft would fly, but his real intent was to test the efficiency of the intubed propeller for later use in airliners and cargo planes.

The Italian government was very much in favor of showcasing their country's technological achievements--particularly in the rising aviation field--and they gave the project to the Caproni company in 1932. 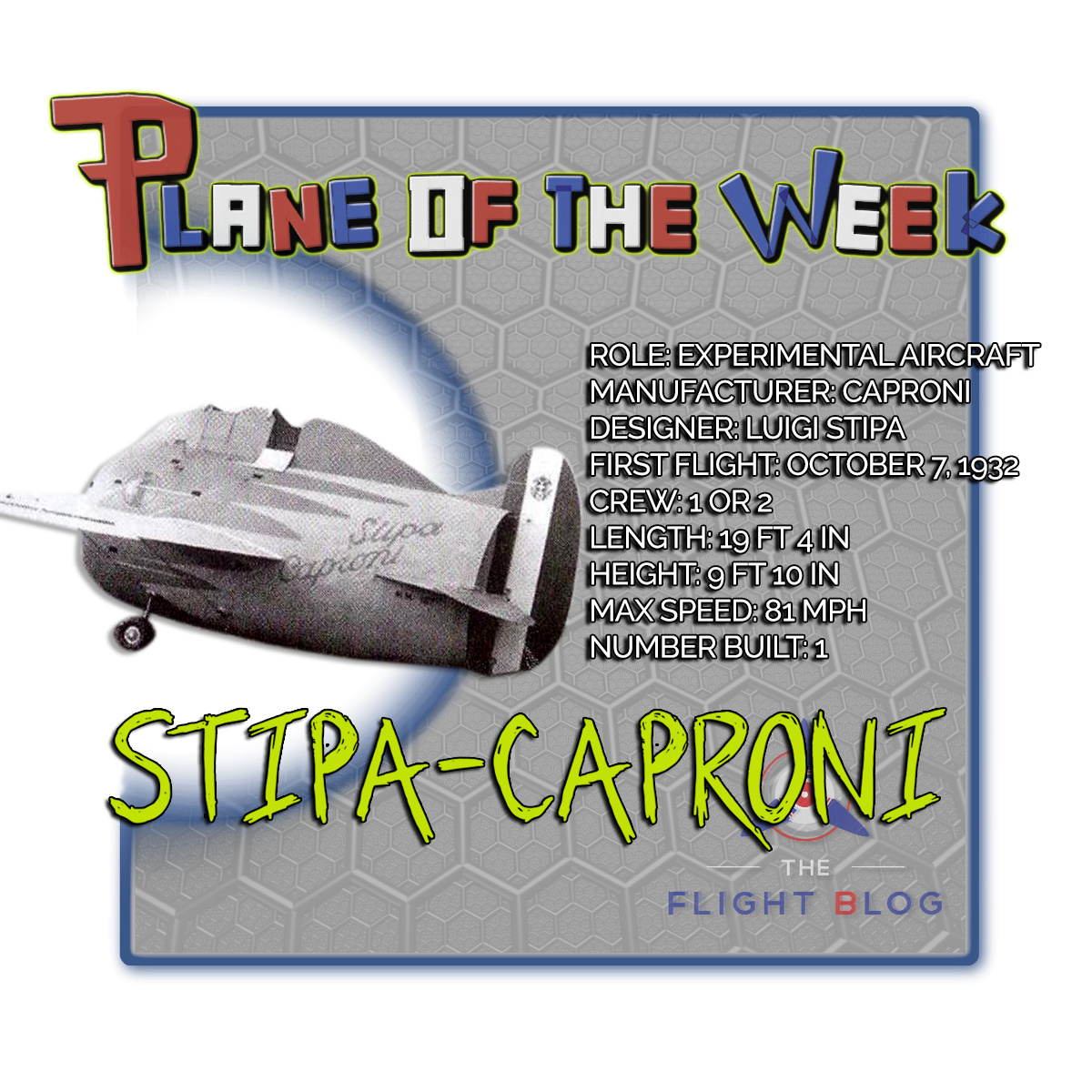 The resulting aircraft from the Stipa-Caproni collaboration (which fittingly was dubbed the Stipa-Caproni or Caproni Stipa) was a midwing monoplane, mostly composed of wood, and completely bizarre-looking. If ugly duckling isn't the best way to describe this little Italian wonder, then flying barrel certainly is.

Its fuselage was too fat and too round. The wings were just kinda there... sticking out the sides because planes need wings, right? The short, fat fuselage was hollow and opened at both ends to form the tapered duct (no, not duck). Twin open cockpits in tandem were mounted in a hump on top. Those elliptical wings, which look so misplaced, actually passed through the duct and engine nacelle inside it. A small rudder and elevators were mounted on the duct's trailing edge so the ducted propeller wash would flow over the crew as it exited the fuselage.

The Stipa-Caproni was powered by a 120-horsepower de Havilland Gipsy III engine mounted within the duct at the midpoint of the fuselage. It had low, fixed, spatted main landing gear and tailwheel so it looked like it was squatting on the ground (and hey, maybe waddling, too).

Despite its nonconventional appearance and design, the Stipa-Caproni could fly and it did for the first time on October 7, 1932. Domenico Antonini, a test pilot for Caproni, flew the plane. Stipa's intubed propeller design actually increased engine efficiency, as he predicted. The aircraft was also incredibly stable. The airfoil-shaped venturi tube produced aerodynamic forces that balanced the plane on all sides. However, because of this, the plane resisted changes in turn and altitude. Achieving stability drastically hindered the Stipa-Caproni's maneuverability. It also proved to be slow. The aircraft had a top speed of only 81 mph.

Speed and maneuverability were key goals in the Italian government's interest in military operations. The Stipa-Caproni failed at both. For the government, the flying barrel was a dead-end. They decided that the project wasn't worth funding. The prototype was the only one ever built.

Though none of Stipa's flying-wing aircraft designs were ever built, his work, including the test flights of the Stipa-Caproni, sparked academic interest. His work was studied in France, Germany, Italy, and the United Kingdom, and by the National Advisory Committee for Aeronautics in the U.S. Several aircraft, including the German Heinkel T fighter, are thought to have utilized some Stipa-Caproni design elements.

A 3/5-scale replica is on static display in Australia. Built in 1998, the Stipa-Caproni replica flew in October 2001.