Why did the airplane cross the globe? To set some pretty impressive records.

It all started with a napkin doodle, as the best ideas tend to do.

The year was 1981. Jeana Yeager and brothers Dick and Burt Rutan were (presumably) enjoying lunch when they first imagined the aircraft and sketched it out on the back of a napkin (as opposed to the front, of course). Over the next 5 years, the aircraft was developed to undergo its historic flight.

The airframe mostly consisted of fiberglass, carbon fiber, and Kevlar. When empty, the plane only weighed 939 pounds; with the addition of the engines, the weight increased to around 2250 pounds. However, the weight of the fully loaded aircraft was 9,694.5 pounds, due to the large amounts of fuel required for such a long, continuous flight. The Voyager has a L/D of about 27. The canard and wing airfoils (with vortex generators to reduce surface contamination sensitivity) were customized specifically for this plane, and computational fluid dynamics were used to analyze/solve potential problems involving fluid flows.

This aircraft had front and rear propellers, each powered by separate engines. On its maiden flight on June 22, 1984, the Voyager was powered by Lycoming )-235 engines with fixed-pitch propellers. In November 1985, it was rolled out, fitted with world-flight engines, an air-cooled Teledyne Continental O-240 (forward location) and a liquid-cooled Teledyne Continental IOL-200 (aft location), and electrically-actuated MT-Propellers. The double engines were designed for separate functions: the front engine was to provide additional power for takeoff and the initial part of the flight at heavy weights, while the rear engine would operate throughout the flight. 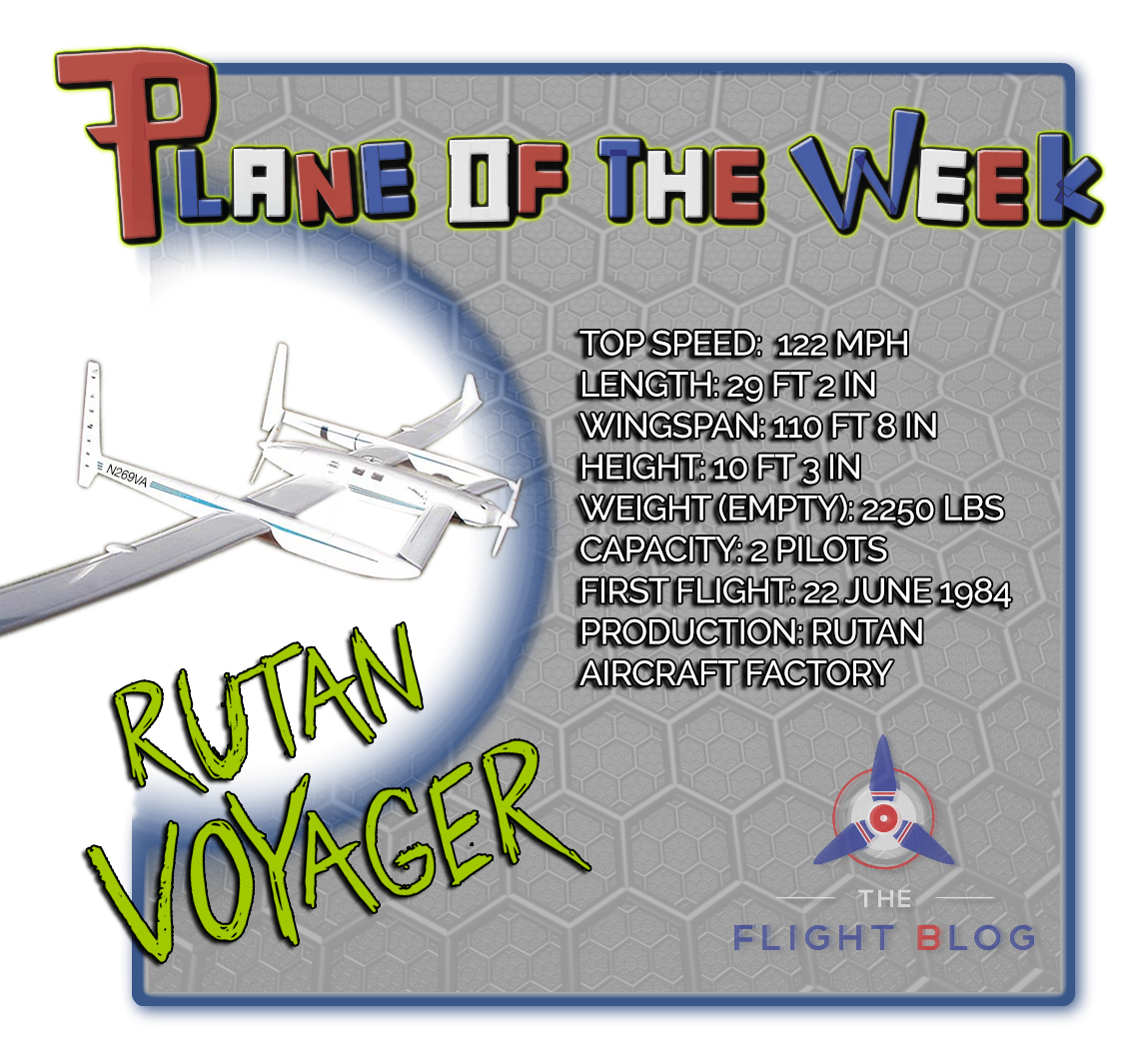 The Rutan Voyager, piloted by Dick Rutan and Jeana Yeager, took off from Edward's Air Force Base's 15,000 ft. long runway in the Mojave Desert on December 14, 1986 (8:01 am local time). They returned to the same runway 9 days, 3 minutes, and 44 seconds later (December 23). Their flight sent a flight endurance record: 26,366 statute miles at an average altitude of 11,000 ft. Rutan and Yeager broke the previous flight distance record set by a US Air Force crew in a Boeing B-52 (that flew 12,532 miles and required refueling in air).

The flight experienced a few hiccups, including damage to the wing tips as the plane accelerated before takeoff. This damage didn't affect their ability to continue the flight.

Yeager, the Rutans, and crew chief/builder Bruce Evans received the 1986 Collier trophy for the feat.

The Rutan Voyager is on display at the Smithsonian Institution's National Air and Space Museum in Washington, DC.