Q: What does a spaceplane and a Dodo bird have in common?

A: Neither flew before their demise (but I'm sure now, given the chance, both the X-20 and the extinct Dodo would be pros at some R. Kelly karaoke-but that's just a hunch).

And sure, there are probably more differences between a bird and a plane (with the potential exception being for Superman's spectators)... but that seems a bit irrelevant. All you really need to know is that between the two, only the Dodo actually existed.

A spaceplane that never really took off

The Dyna-Soar was part of a program initiated by the US Air Force to develop a spaceplane that could be used for military missions, such as aerial reconnaissance, bombing, space rescue, satellite maintenance, and as a space inceptor to sabotage enemy satellites. This particular aircraft was much like a combination of the space shuttle (not yet invented at this time) and a jet: the proposal was for it to travel to targets at the speed of an intercontinental missile (really fast), yet land back on earth at an airfield like a typical plane under the control of a pilot (rather than falling to earth with a parachute).

The X-20 proposal was remarkably advanced given its time in history (the program ran from October 24, 1957 to December 10, 1963) and its development traces back to WW2 and Silbervogel bomber project (the concept was for a rocket-powered bomber that could travel great distances by gliding to its target after being boosted to high speed and high altitude by a rocket). 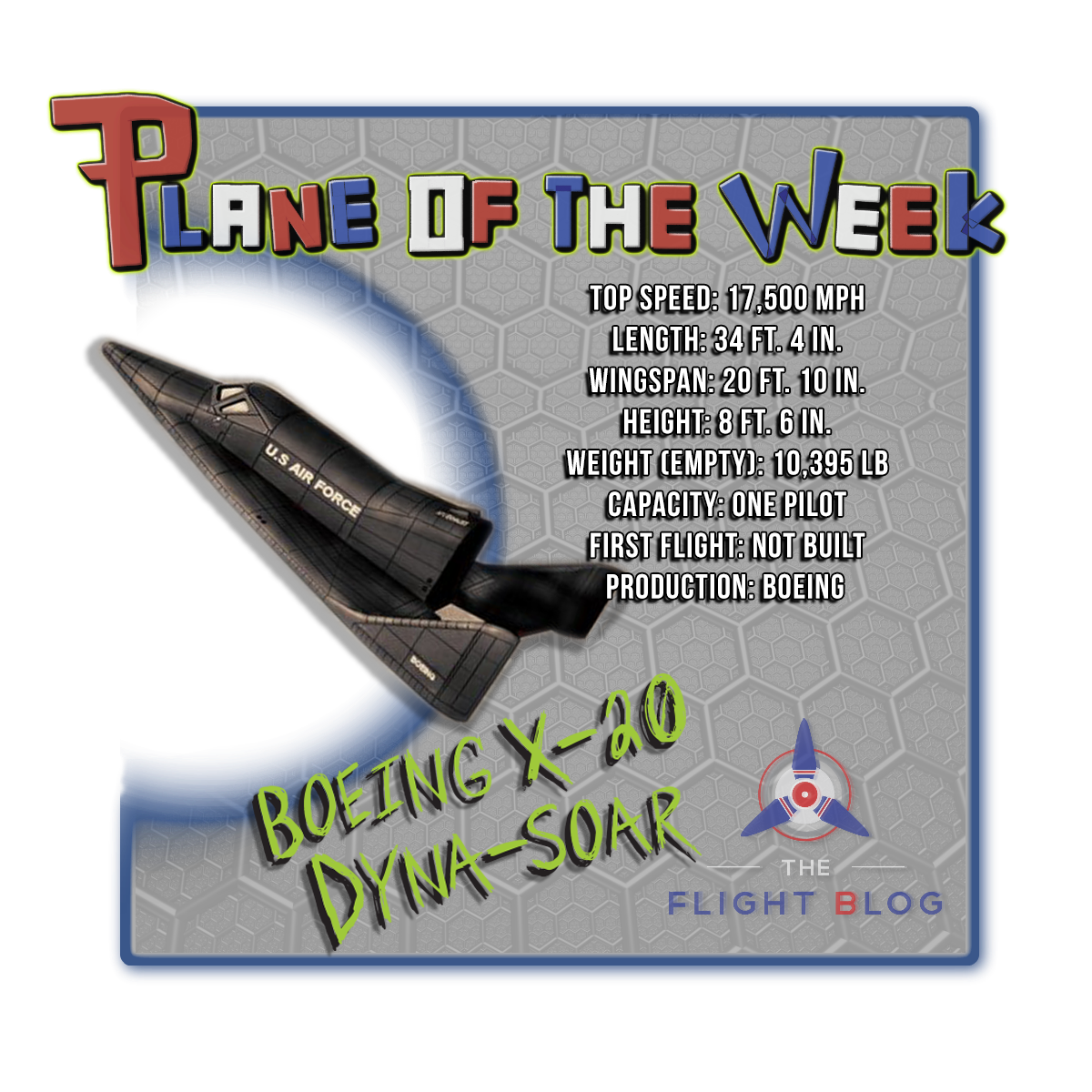 Out of the 9 aerospace companies to submit proposals for a USAF contract, Boeing was ultimately selected in June 1959. The overall design for the X-20 Dyna-Soar was outlined in March 1960: low-wing delta shape with winglet for control. The frame was to be constructed from the Ren 41 super alloy (a nickel-based high temperature alloy developed by GE). Though the aircraft went through many design changes, it retained its basic shape a layout: a single pilot in the front with an equipment bay behind that would contain data-collection equipment, weapons, reconnaissance equipment, etc. Since rubber tires would burn on reentry into the atmosphere, Goodyear developed retractable wire-brush skids made from the same material as the airframe.

In April 1960, seven astronauts were secretly chosen for the Dyna-Soar program; however, among those chosen, Neil Armstrong and Bill Dana dropped out before the project was even cancelled.

The project faced several issues, and funding was no small matter (it has already cost $660 million by its cancellation, which is over $5 billion in today's market). There was also uncertainty regarding the booster to be used to send the craft into orbit (certainly not a minor problem), as well a lack of goal for the project (such as, is it even necessary for the Air Force to have a manned space program when we have NASA).

Despite the Dyna-Soar's extinction pre-construction, the research that went into spaceplanes at the time ultimately led to the development of the much larger Space Shuttle Program.

So, what else might the Dyna-Soar and our fine feathered friend have in common?

I'm sure we'll think of something. 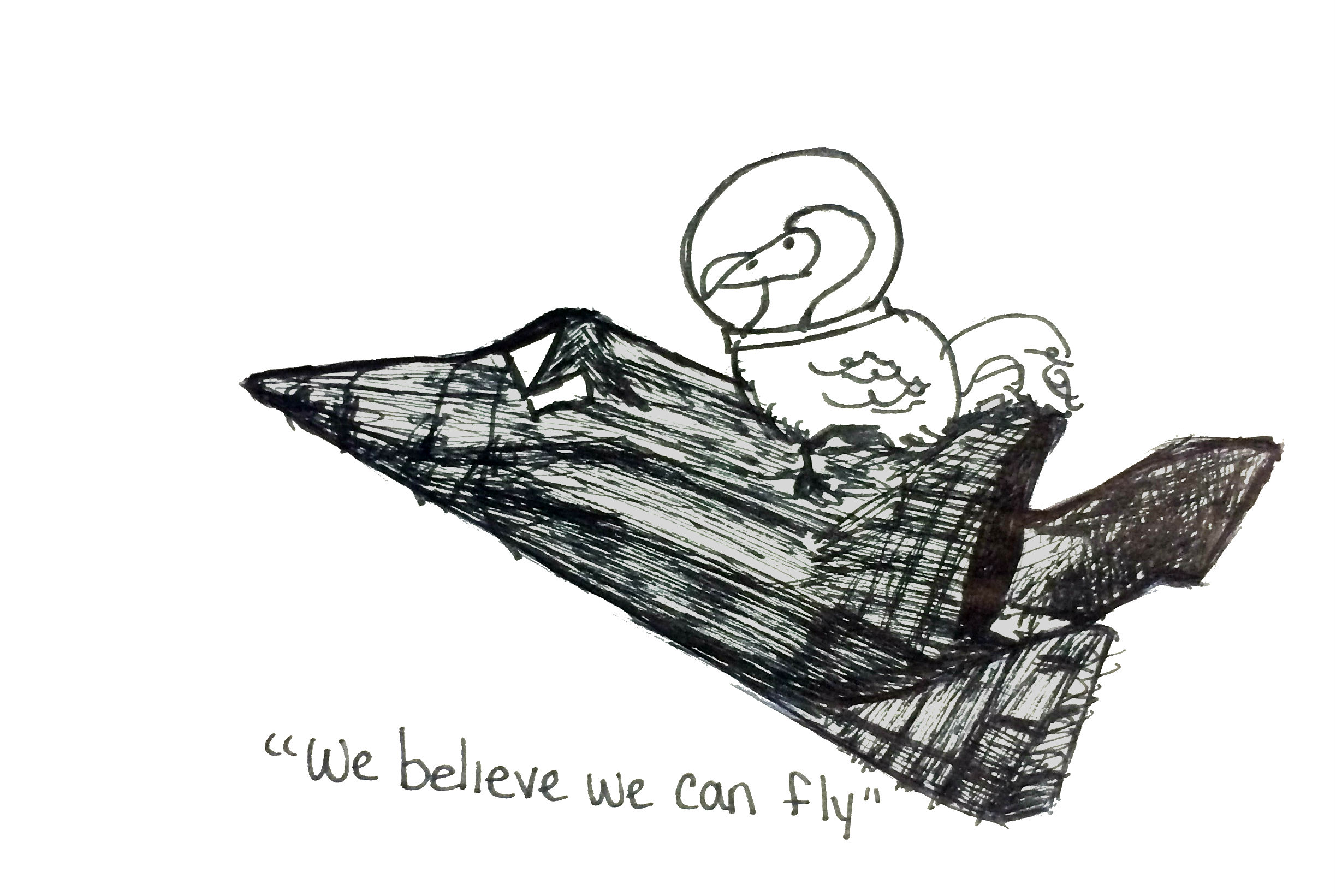