The Lockheed C-5 Galaxy is one of the largest military aircraft in the world--and probably out of this world, too.

The Lockheed C-5 Galaxy is the United States Air Force's largest and only strategic airlifter. This gargantuan aircraft can carry more cargo farther than any other aircraft in the world. Additionally, with its payload of six Mine Resistant Ambush Protected vehicles (MRAPs) or up to five helicopters, the C-5 can also haul twice as much cargo than any other airlifter.

See? Out of this world isn't so far a stretch now, is it?

In the early 1960s, several aircraft companies began to study heavy jet transport designs to replace the Douglas C-133 Cargomaster and complement Lockheed C-141 Starlifters. The U.S. Army wanted a transport aircraft that naturally had higher overall performance, but also a larger cargo bay than the C-141. The C-141 was too small to carry much of their oversized equipment.

The Army issued their official request for proposal in April of 1964 for the "Heavy Logistics System" (CX-HLS). The following month, Boeing, Douglas, General Dynamics, Lockheed, and Martin Marietta all submitted aircraft proposals. General Electric, Curtiss-Wright, and Pratt & Whitney all submitted proposals for the four engines in the concept design. The Army awarded one-year study contracts for the airframe to Boeing, Douglas, and Lockheed, while GE and Pratt & Whitney got engine contracts.

While the U.S. Air Force considered Boeing's design superior, Lockheed's proposal was the lowest total cost bid and they got the contract in December 1965. GE's  TF39 engine won their contract earlier in August 1965.

The very first C-5A Galaxy left the manufacturing plant on March 2, 1968. Flight testing began on June 30, 1968. These tests discovered the C-5 exhibited a higher drag divergence Mach number than previously predicted. The maximum lift coefficient measured in flight with the flaps deflected 40-degrees was also higher than predicted; however, it was lower than predicted with flaps deflected 25 degrees and with flaps retracted.

Throughout the testing process, the C-5 was subject to a number of problems, particularly weight issues. Initially under wight guarantees, but the time the 9th aircraft was delivered, it exceeded guarantees. Additionally, the wing failed at 128% of limit load during a fuselage upbending test in July 1969. The C-5's cost overruns and technical problems were the subjects of a congressional investigation in 1968 and 1969. 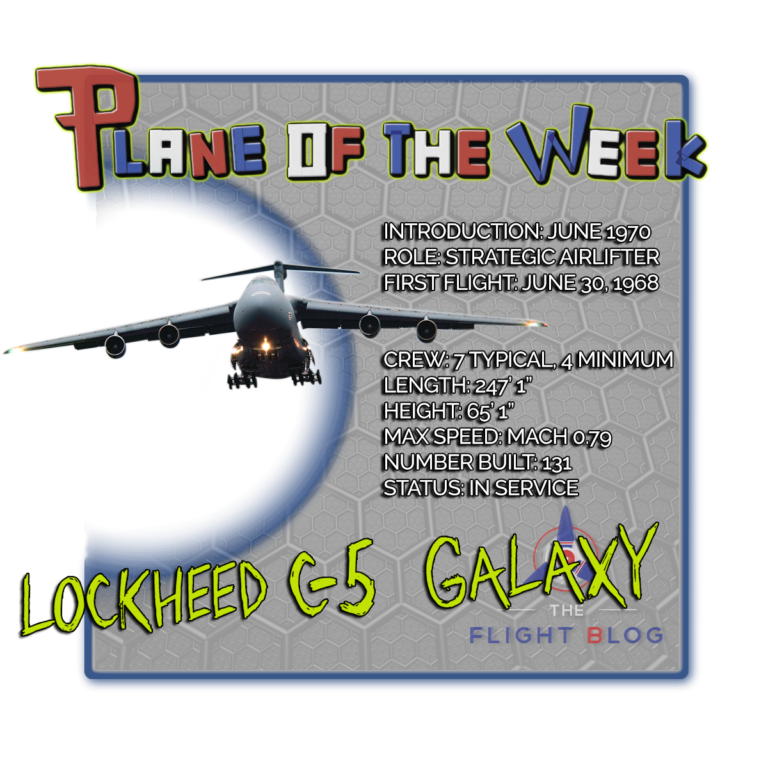 While perhaps not the best of all distinctions, the Lockheed C-5 Galaxy has the honor of being the first development program with a one billion dollar overrun. If we're being honest, though, we know it wasn't the last.

Lockheed's financial difficulties nearly brought the entire C-5 production to a halt in 1971.

With President Reagan's military policy, funding was available for expanding USAF airlift capabilities; Congress approved funding for a new version of the C-5, the C-5B, in July 1982 to expand airlift capacity.

In 1998, the Avionics Modernization Program (AMP) started upgrading C-5s to include a glass cockpit, navigation equipment, and a new autopilot system. The C-5 modernization effort also includes replacing the engines with newer, more powerful ones. Fifty-two C-5s are contracted to be modernized through the Reliability Enhancement and Re-Engining Program (RERP). This program should be completed early 2018.

The Lockheed C-5 Galaxy is limited to military and government use. As of September 2016, the USAF has 48 C-5s in service.