The Albatross is a special plane...or  it's a  very special boat (really, it's both). How? Because this craft is not just an aircraft: it's a large twin-radial engine amphibious flying boat. Really.

The Grumman HU-16 Albatross was an improvement to the design of the Grumman Mallard (a  medium twin-engined amphibious aircraft) and was specifically developed to land in open ocean situations to accomplish rescues--it manages ocean landings due to its deep-V hull cross-section and keel length. While it was designed to optimally perform in 4-foot seas, it could land in more severe ocean conditions, but such a situation could require JATO (jet-assisted take off) for takeoff in seas 8-10-feet (or greater).

These planes was used by United States Air Force (USAF), the U.S. Navy (USN), and the U.S. Coast Guard (USCG) as search and rescue aircraft. It was originally designated as the SA-16 for the USAF and the JR2F-1 and UF-1 for the USN and USCG; it was re-designated the HU-16 in 1962. 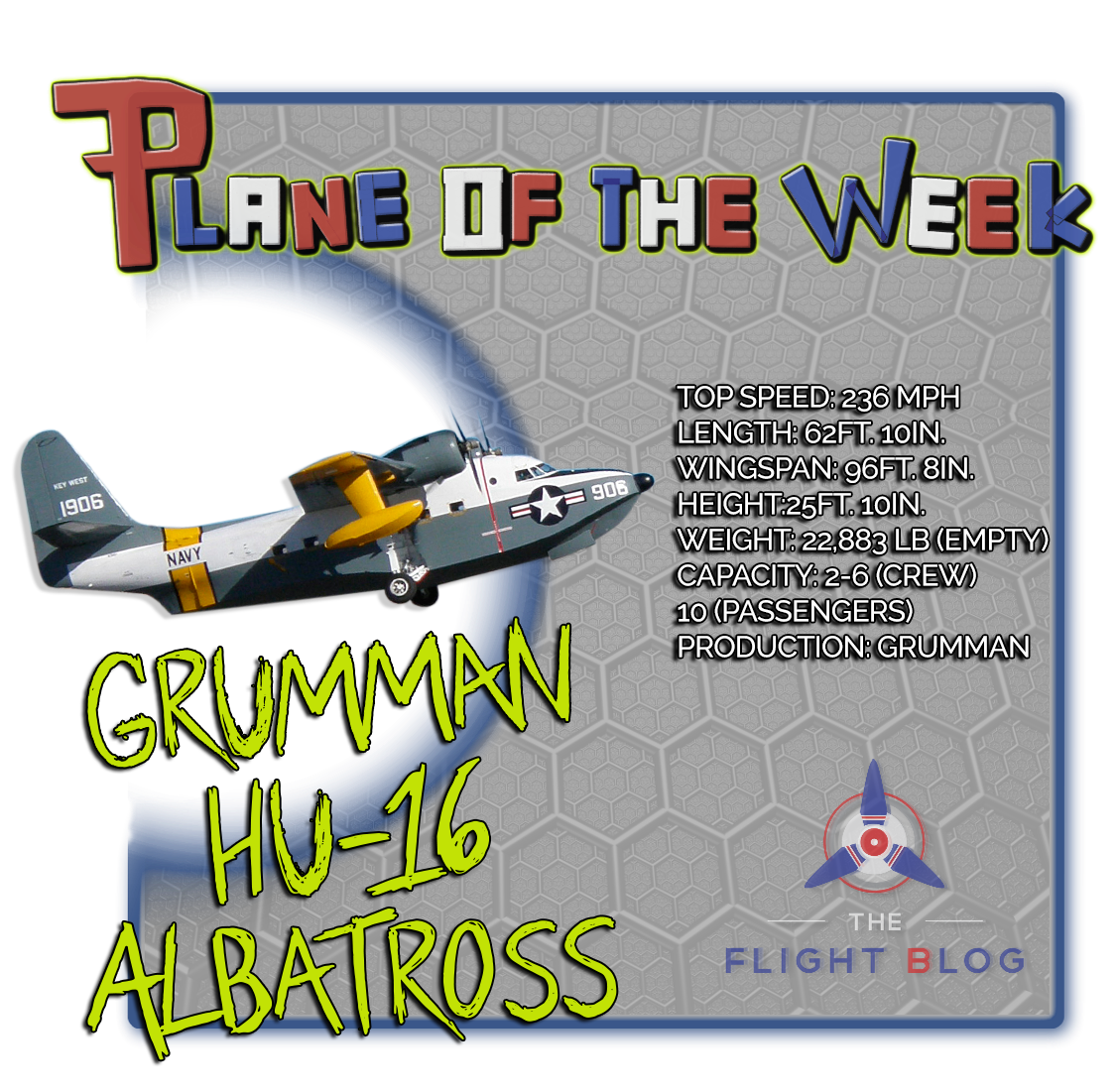 The Albatross first took flight on October 24, 1947. Production occurred from 1949-1961 and 466 aircraft were built. Of those 466 aircraft, a majority were used by the USAF. They were used extensively in Korea for combat rescue, where it gained its reputation as a rugged and seaworthy aircraft. A redesigned HU-16B was also used by USAF's Aerospace Rescue and Recovery Service and was used extensively in combat during the Vietnam War. The final USAF HU-16 flight was the delivery of AF Serial No. 51-5282 to the National Museum of the United States Air Force at Wright-Patterson AFB, Ohio in July 1973.

The Navy used these craft as search and rescue (SAR) aircraft from coastal Naval air stations both stateside and oversees. Albatross were also used by the Navy for Goodwill flights during the early 1970s to the surrounding Trust Territory of the Pacific islands.

The Coast Guard used them as coastal and long-range open ocean SAR aircraft for many years until it was eventually replaced by the HU-25 Guardia and HC-130 Hercules. The final USCG HU-16 flight was at CGAS Cape Cod in March 1983 when the aircraft was retired.

Many other countries employed the Albatross for military service, including Argentina, Canada, German, Iceland, Italy, Japan, Mexico, Pakistan, Portugal, and Spain. The last Albatross to retire from Military service was in 1995 by the Hellenic Navy (Greece).

Many of the surplus aircraft not used for military service were sold to civilian operators, mostly private owners. Civilian Albatross are operated under wither Experimental-Exhibition or Restricted category and cannot be used for commercial operations (except under very limited conditions).

In the early 1980, Chalk's International Airlines has 13 converted to Standard category as G-111s, making them eligible to be used in scheduled airline operations. Extensive modification to these planes included rebuilding the wings with titanium wing spar caps, additional doors and door/hatch modifications, stainless steel engine oil tanks, dual engine fire extinguishing systems on each engine, and the installation of propeller auto feather systems. They were only operated for a few years before being put in storage in Arizona-most are still parked there; however, some have been returned to regular flight operations with private operators.

In 1997, a Grumman Albatross (N44RD), piloted by Reid Dennis and Andy Macfie, was the first albatross to circumnavigate the globe. The 26,347 nautical mile flight lasted 73 days, which included 38 stops in 21 countries, and was completed with 190 hours of flight time. Reid donated the aircraft to the Hiler Aviation Museum in 2013.

Civilian pilots of US registered Albatross must have a type rating (because the aircraft weighs over 12,500 pounds); pilots can become type rated at the yearly Albatross fly-in held in Boulder City, Nevada.

An Albatross in Paradise

Perhaps one of the most famous Albatross is the one Jimmy Buffet owns: The Hemisphere Dancer. In 1996, Buffet's 1954 Albatross was shot at by Jamaican authorities while it taxied in the water near Negril, after authorities mistook it for a drug-runner's plane. Bono also happened to be on the plane at the time (yes, that Bono). Having -only come for chicken,- Buffet wrote a song about the incident: -Jamaica Mistaica- is on the album Banana Wind. It's a good thing no one was hurt by the incident, because if Samuel Taylor Coleridge taught us anything, it's to never shoot an albatross.

Buffet retired The Hemisphere Dancer in 2003 and put it on display at the Lone Palm Airport outside his Margaritaville Caf in Orlando, Florida.  I think it's safe to say that no one has shot at it since.