Designed as a successor to the Grumman F4F Wildcat, the F6F Hellcat became America's dominant fighter during the second half of the Pacific War.


The highly successful Grumman F4F Wildcat had its first flight in September 1937 and began its service with the US Navy and British Royal Navy in December 1940. As early as 1938, Grumman was already working on a successor to the Wildcat, years before its official introduction. The contract for a prototype was signed on June 30, 1941.

The Japanese attack on Pearl Harbor and the United State's involvement with WWII particularly hastened the development of an aircraft to replace the Wildcat. This aircraft, what would become the F6F Hellcat, was specifically built to counter the Japanese Zero.


From the get-go, the Hellcat was a large plane. Leroy Grumman, Leon Swirbul, and Bill Schwendler designed the plane to have higher performance, more fuel and ammunition, and huge wings. While typical aircraft of the time had wings averaging less than 250 square feet, the Hellcat's wings extended over 334 feet. These large wings were able to fold back next to and alongside the fuselage.

Initially, the Hellcat was designed to use the Wright R-2600 Twin Cyclone radial engine (1,700 horsepower). However, Grumman later changed this to a more powerful 8-cylinder Pratt & Whitney R-2800 Double Wasp radial engine (2,000 horsepower).  This change was made on the basis of speed and better climb.

All F6F Hellcat aircraft were designed to take damage and get the pilot safely back to base. The planes were outfitted with bullet-resistant windshields and 212 pounds of cockpit armor, as well as armor around both the oil tank and air cooler. 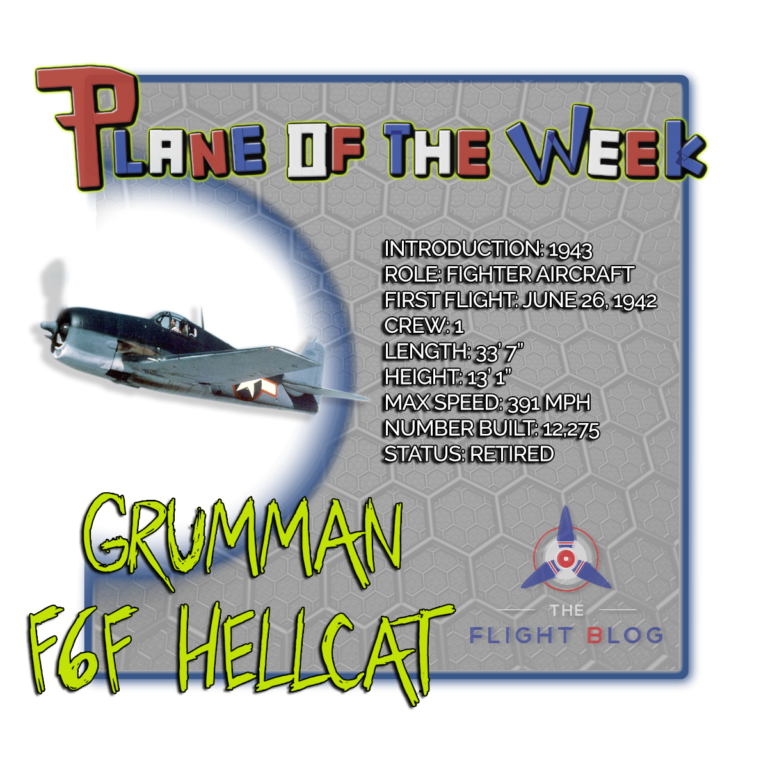 
This carrier-based fighter aircraft ultimately went from its experimental stage to operational employment in about a year and a half.

Fighting Squadron Nine (VF-9) received the first delivery of Hellcats (F6F-3) in January 1943. The F6F-3 had its first combat encounter on August 31, 1943, with VF-5. The F6F-5 became operational in 1944 with a number of improvements, including refined cowling and an improved windshield. The F6F-5 could also carry additional armaments.

By November 1945, the final Hellcat finished production, bringing the total number of F6Fs to 12,275. Of that total, 11,000 aircraft were produced in just two years. A sound original design with minimal modification contributed to such a high production rate.

The U.S. Navy preferred the F6F Hellcat for its docile fight qualities, particularly when it came to carrier landings. The F6F was the standard for USN carrier-borne fighters until late 1944 when the F4U series was cleared for U.S. carrier operations.

The F6F Hellcat was among the top fighters of WWII. Pilots loved its ease of operation and incredible performance. Hellcat pilots had a 19:1 kill ratio against their enemies. In just two years, these pilots downed over 5,000 enemy aircraft-that's about 75% of the total Navy aerial victories during the course of WWII.